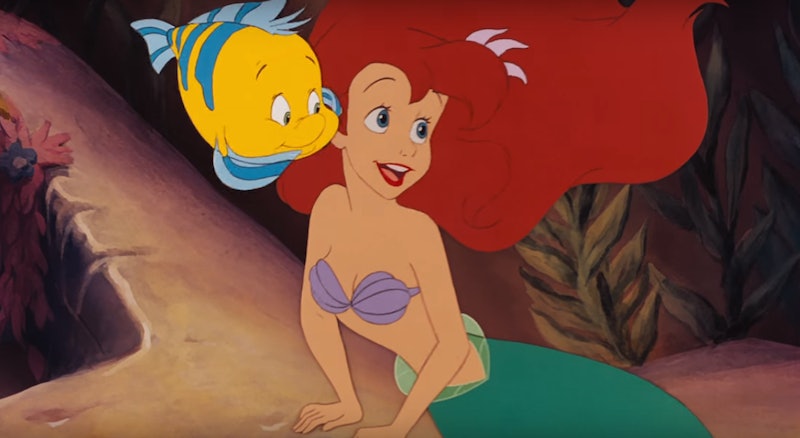 Get your shining collection of gadgets and gizmos-a-plenty in order, because ABC announced a live musical version of The Little Mermaid as part of their upcoming programming, and you'll probably want to make some noise about it. As reported by Deadline, the two-hour special event, titled The Wonderful World Of Disney: The Little Mermaid Live!, will be a combination of live-action and animation, with some soon-to-be-unveiled celebrities reportedly attached to perform the story and songs from the 1989 classic movie. So, obviously you'll want to know when The Little Mermaid live musical premieres.

Thankfully, fans don't have too long of a wait for this ambitious and, frankly, spectacular-sounding show to happen, since The Little Mermaid live musical will premiere on Oct. 3, as part of ABC's fall schedule. This leaves you just enough time to refresh yourself on all of the lyrics from The Little Mermaid soundtrack. Because seriously, you and I both know that this is the perfect excuse for all of us to throw on our mermaid tail blankets and enjoy a loud, rapturous sing-along with our nearest and dearest. I'm so ready to get my mermaid vibe on this fall, it's not even funny.

But first, there is some definite preparation we could all do before such a sing-along. That soundtrack is tricky for us mere mortals to take on, you guys. Like, I'm sure we all think we're capable of singing "Under The Sea" with the same bright gumption as Sebastian, but get yourself over-excited or too cocky about it, and that tune is an instant tongue-twister.

And, having just attempted to sing along to "Part Of Your World," I can officially confirm that I've lost all the girlish swagger I used to have as a child singing along to that song. Now, I sound a little strained, a touch frightening, and ever-so slightly tragic. But more importantly, I definitely thought I knew every lyric from the song, when in actual fact, I'm horrified to discover that I don't. My brain has betrayed me, people.

So, here's my advice: Start revisiting those songs immediately, scrub up on the lyrics, and sing like no old sea witches can hear you. That's definitely the secret to it. Oh, and maybe start planning some under-the-sea themed cocktails for the occasion too. You know, just to lubricate those vocal cords and toughen up the confidence of your sing-along squad. Because October will be here before you know it, and you're definitely going to want to be part of this show's world.