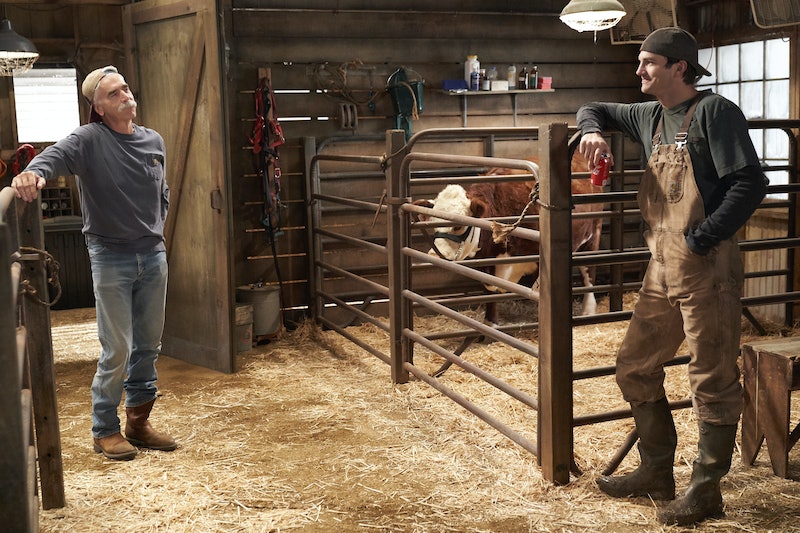 The Ranch may not have ended up with the same cultural impact as Netflix megahits like Orange Is The New Black or Stranger Things, but it's actually one of Netflix's longest original series. When The Ranch Part 8 premieres, the show will have aired 80 episodes, making it the longest half-hour series on Netflix (assuming Grace and Frankie doesn't pull ahead in the lead with its final seasons, as it currently sits at 65 episodes). Filming has already concluded on the series, but audiences will have to wait until 2020 the see the end of the Bennett family story.

While audiences don't have to grieve the conclusion of The Ranch quite yet, with 10 fresh episodes that make up Part 7 dropping on Sept. 13, well before Part 8 arrives, the cast has already started reminiscing on social media about how they'll miss working on the show. Elisha Cuthbert posted on Instagram that with the filming of The Ranch concluded, "One of the most enjoyable experiences of my professional career has come to a close." Late-series cast addition Dax Shepard shared a similar sentiment on his Instagram, adding, "A lifetime highlight was hugging Sam Elliott every morning when I got to work. That's far more luck than I ever planned on having."

While the cast already knows what the rest of the series has in store, there are likely still some surprises that Ranch fans will come across through the show's final parts. Here's just a taste of what fans can expect from the show's concluding chapters.

The Ranch is known for its penchant to slow down the laughs and let its characters be serious for long stretches of time, but it's still a sitcom. With 10 more episodes left before the show's end, there's plenty of time for the show to bust out at least one more memorable comedic set piece.

At Least One More That '70s Show Alum

The Ranch started out with a That '70s Show reunion between Ashton Kutcher and the since-fired Danny Masterson, which only grew once Wilmer Valderrama, Debra Jo Rupp, and Kurtwood Smith became guest characters on the series. Fellow '70s alums Mila Kunis and Laura Prepon have visited the set but never been on camera, so perhaps the show's conclusion will be cause enough to bring some of the gang back together again.

Things have never been easy on the Iron River Ranch. The Bennett family ranch has been plagued by hardships of all kind, especially financial, and the end of the series may coincide with the end of the Iron River Ranch. The show has never pulled emotional punched before, and there's no reason to believe the show won't sneak in a few more emotional gut-punches before it ends.

The Ranch is a unique show among sitcoms — a distinctly Midwestern take on American life in the late 2010s — but it's clear that if nothing else, the cast is going to miss their time on this show dearly.