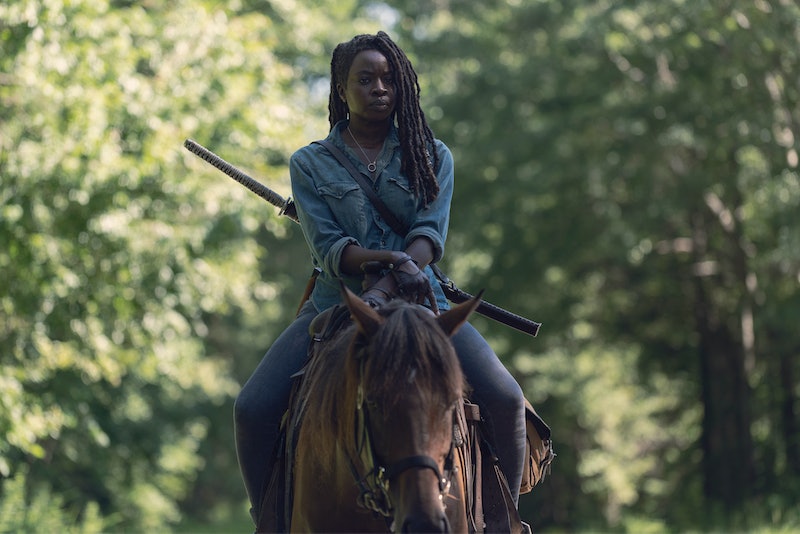 The holiday season is in full swing, which means it's time to breakout those Christmas decorations and start drinking eggnog on the regular. However, it also means that many beloved shows that you always tune in for each and every week are gearing up to go on a brief hiatus. And while some shows have already done so, next on the list is AMC's The Walking Dead. But when does The Walking Dead Season 9 come back, exactly? Even zombies need a little break to enjoy the most wonderful time of the year and partake in yuletide festivities.

As of now, the network has yet to reveal an exact return date for The Walking Dead's ninth season, so predicting when the show will come back is a little more tricky but not impossible to figure out. For instance, just looking back at past seasons can help ascertain any pattern that has developed, therefore allowing you to come up with a rough estimate as to when Season 9 will pick back up again. If you recall, Season 8 went on its winter hiatus on Sunday, Dec. 10, 2017 and didn't return until Sunday, Feb. 25, 2018. Similarly, Season 7 took a break on Sunday, Dec. 11, 2016 and came back on Sunday, Feb. 12, 2017.

Granted, Season 9 is ending a little earlier than these past few seasons, but if this general pattern keeps up, then odds are The Walking Dead will return sometime in February 2019. Sure, that's a significant amount of time to go without a proper zombie fix, but then again anything involving the undead doesn't exactly exude holiday cheer, so maybe it's for the best.

The series has seen a significant amount of changes over the past several weeks. Not only did it bid farewell to the show's main star, Rick Grimes, played by Andrew Lincoln, but it also introduced a big time jump and array of new characters. Can they really be trusted or will showing kindness to strangers once again blow up in Michonne's face? On a series like this, it can be hard to tell a friend from a foe until it's too late. Let's hope this won't prove to be one of those instances for everyone's sake.

Odds are that the show will end its midseason finale on a big cliffhanger — thus making the hiatus all the more torturous to endure. However, it's anybody's guess as to what that cliffhanger will be. Maybe we'll finally get more information about those whispering zombies that's sure to haunt all of our nightmares until well into the new year. Or perhaps Negan's storyline will finally get interesting again and serve an actual purpose. (Hey, it could happen.) Either way, this is one episode viewers will definitely need to make sure they tune in for — especially since it'll be the last episode they get for quite some time moving forward.