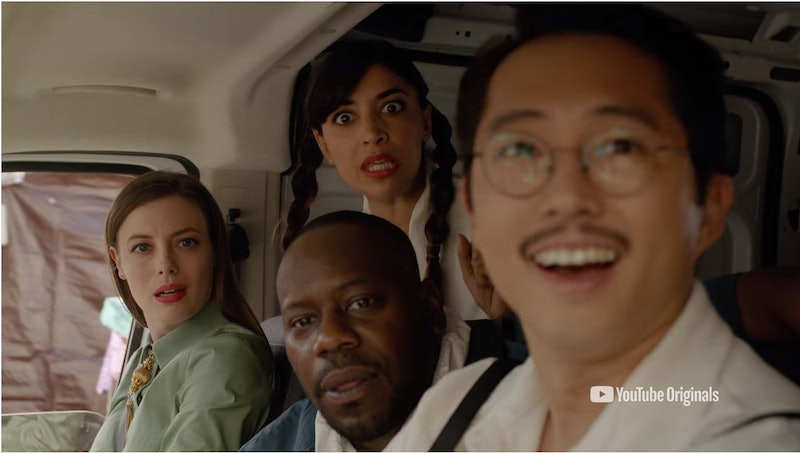 Youtube's newest series, Weird City, imagines an urban dystopia with a stark divide between the haves and have nots. It can at times feel a little too close for comfort, leaning into present day themes like the inauthenticity of social media and America's widening class divide, but aside from the fact that Weird City takes place in the not-too-distant future, we don't know much about the year it's happening in. Fortunately, that's not really the point: the show is more interested in poking fun at our current culture than it is in predicting the future.

Dystopian fiction has long been a popular sub-category of science-fiction, but the genre has become particularly prominent the last decade thanks to projects like The Hunger Games franchise, The Handmaid's Tale, and Black Mirror. Weird City, like Black Mirror, is an anthology series, meaning each episode follows different characters and imagines different aspects of the show's titular metropolis. It takes recognizable aspects of life at the beginning of the 21st century and stretches them to extremes that seem absurd, but don't seem entirely impossible. The fact that Weird City doesn't reveal its exact setting forces you to wrestle with the idea that while you could easily write off its stories as far-away fiction, it's not all that unreasonable that they could become reality quite soon.

The most distinctive part of Weird City is its stark class divide. A literal line runs through the city separating the extremely wealthy from the extremely impoverished. People are still able to cross that divide, but it seems the main reason that people do so is to gawk at how worse off the lower class is. It sounds ridiculous, but it is any more absurd than people going on vacations to beach resorts in the Bahamas while many of the Bahamian locals struggle to make ends meet?

Weird City also covers dating apps, the concept of genetic enhancement, and the world of constant advertising that feeds off of people's insecurities and pushes people to find new, and often costly, methods of creating idealized versions of themselves. There's a sense of irony in the fact that Weird City is being released as a Youtube Original, a platform which puts advertisements before (and during) most of their videos and is arguably contributing to the culture of endless advertising that Weird City is satirizing.

Weird City's idea of the future is rooted directly in the idea that the problems happening in our culture now could significantly worsen with time. That's not entirely realistic, as new technologies and trends that are difficult to predict have the ability to change the world, while others could become a passing fad. For every invention like the iPhone, there's at least a dozen as irrelevant as hoverboards, fidget spinners, or Google Glass. Ultimately, Weird City is a hilarious look at a future that may not come to pass, but it still has a lot in common with the present era — and it, like many great sci-fis, will entertain you as much as it makes you think.