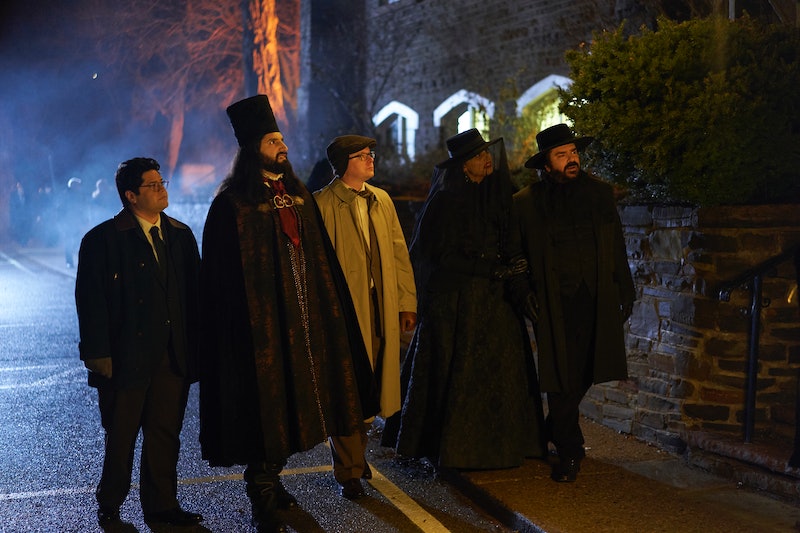 Spoilers ahead for What We Do In The Shadows' Season 1 finale. Good news for fans of Jemaine Clement and Taika Waititi's wacky vampire universe: What We Do In The Shadows will return for Season 2, and the wait isn't actually that long. As reported by Variety, the FX mockumentary — based on Clement and Waititi's cult 2014 film of the same name — is set to air its second season in 2020. An official premiere date hasn't yet been announced, but considering Season 1 debuted in late March, it should be back sometime next spring.

Season 1 expanded upon the WWDITS universe in a lot of ways. Much like the movie, it introduced us to a vampiric community going through the mundanities of everyday immortal life. Except instead of New Zealand, new characters Nandor, Lazlo, Nadja, and Colin the energy vampire are living in Staten Island. We also saw Jenna (Beanie Feldstein), a local college student, move through the journey of becoming a vampire, which added a fresh dynamic to the story since the rest of the coven have been vampires for hundreds of years at this point. Still, there's a lot left the show can and should explore in Season 2 — especially after that major Guillermo/Van Helsing reveal.

Who Else Is On That Council?

Not only did Episode 7 introduce a vampire tribunal led by the three Kiwi vampires from the original movie, it also revealed that, according to the show, every single actor who has ever played a vampire in a movie is an actual vampire in real life. Is the "Rob" they mention Robert Pattinson? Is Antonio Banderas on the council, and can Guillermo meet him? We need to see this play out.

Will We See More Gregor?

Now that Nadja's reincarnated lover is dead, how soon will he come back? If Gregor is reborn in Season 2, that could be a really fun casting opportunity.

Is Guillermo A Vampire Slayer?

In the Season 1 finale, Guillermo finds out he's related to famed (and fictional) vampire slayer Van Helsing. It's unclear what this means for him moving forward, but it's clear he's grappling with the idea that he may have the power to turn on his beloved Nandor.

Will We See More Of New York?

The WWDITS vampires have spent time in Staten Island and Manhattan, but there's definitely more New York City to explore. You know the vampire scene in Brooklyn and Queens has to be wild.

Will We See More Werewolves?

Season 1, Episode 3 gave fans a taste of the Staten Island werewolves, but that's such a beloved part of the movie. They have to come back. Waititi and company have been toying with the idea of a werewolves spinoff for a while, but maybe that can just exist on the FX series.

And Can We Get More Beanie Feldstein, Please?

Jenna, the baby vampire that Nadja sires, is one of the best characters in Season 1, but she's not in too many episodes. Sure, the most likely answer to "why" is that the actor went off to go kill it in movies like Booksmart and the upcoming How To Build A Girl, but it would be great to see more of her vampiric evolution.

Surely whatever What We Do In The Shadows cooks up for Season 2 will be perfectly hilarious and hilariously perfect. Until then, you'll just have to rewatch the movie for a 50th time.