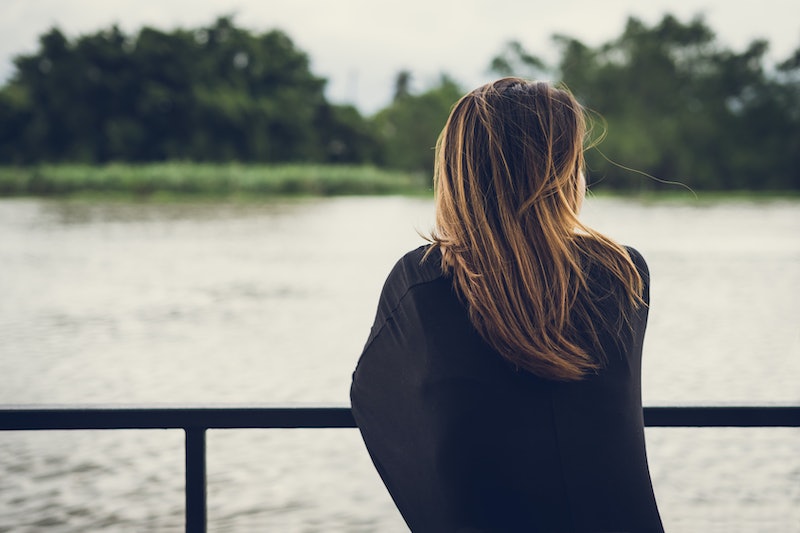 Head down, don’t make eye contact. That what I’d tell myself over and over when I went to the mini-mart a block away from my dorm, the same one I’d gone to every night that week. I’d thought about going to a different store, one where the clerk wouldn’t recognize me—maybe the 7/11 on the main street a few blocks away, or the CVS up the road. But I couldn’t bear to wait even those extra few minutes once the thing inside my brain took hold, commanding me to fill myself up.

Sweet, salty, sweet, salty, sweet. I filled my arms with snacks that would allow me variety in my binge: Swedish Fish, bag of barbecue chips, pint of ice cream, plastic tube of pistachios, Kit-Kat bar. Choosing the items felt like solving a Sudoko puzzle: I wouldn’t want two chocolate-y snacks next to each other in the line-up, nor two nutty snacks. If I bought a box of cereal, then I wouldn’t buy a box of Cheez-Its.

Every time, the binge didn’t feel long enough. Every time, I wished I could eat more.

If I couldn’t make it to the mini-mart, I ate whatever I could find around the kitchen in my dorm: tubes of honey, hot chocolate mix, toast dripping with butter. Sometimes I poured dry packets of instant oatmeal directly into my mouth. Sometimes I would try to throw up, to make more room in my stomach so I could continue chewing and swallowing, comforting but never quite satiating myself. I cried and told myself to stop, that this was the last time. Then, the next day, it happened all over again. My entire day revolved around when and what I would eat, everything a prelude to the glorious moment I could finally hide from the world again and binge. Every time, the binge didn’t feel long enough. Every time, I wished I could eat more.

These binges weren’t my first experience with disordered eating. Three years earlier, I had been severely anorexic. I had weighed about seventy pounds less; photos of me from my senior year of high school are all elbows and collarbone, a smile with teeth too big for my face so I look like a grinning, chattering skull. Then, all of my interests were replaced with food, my only hobby controlling what I ate. I only permitted myself to eat 1200 calories a day, and usually far fewer; if I didn’t plan and write down my food for the entire day in advance, I would short-circuit, snap and fritz like a wet hairdryer. I was miserable. At night, I remember praying that it would end, that my brain would let me just eat normally again.

But when, after years of therapy, introspection and self-regulation, it finally ended (or, ended as much as eating disorders can ever end), I still held on to the label “anorexia.” I wasn’t ashamed of the diagnosis and talked openly about my experiences. This was, in part, because our culture celebrates the traits and behaviors that became exaggerated in anorexia. I didn’t have to go to hidden corners of the internet to get tips for making low-cal green smoothies; I got them from women’s magazines, the same ones that advised me to replace my ice cream with frozen blended bananas. They offered advice on how to lose five pounds in a month; I thought I was simply better because I found a way to do it in a week. While I was suffering from anorexia, I was disappearing, my brain deteriorating until all I could think about were calorie counts. And yet, I still felt that I looked, and acted, like the type of woman society wanted me to be, the type of person I wanted to be: controlling, overachieving, meticulous. Once I was in recovery, having been strong enough to beat it felt to me like a double-whammy of disciplined competence.

I grew up with an awareness of what anorexia and bulimia were. We watched terribly-acted old PSA films in health class about girls with permed hair surreptitiously throwing their lunches away and then inevitably fainting. But no one ever told me about binge eating disorder. No one said that my brain could burn with the need for sugar and the mechanics of chewing, that my limbs would be obeying the command before I even realized what I was doing, as if I had been hypnotized. No one taught me what to call the impulse to feel so full it hurt, until my stomach was all I could sense and everything else in my life was dull and distant, as if I were underwater.

Many people who are otherwise aware about disordered eating look away in shame at a woman who we perceive as having “lost control” around food.

So when I began bingeing, in college, it felt like a moral failing. Though I could tell that I was dealing with a form of disordered eating, “out of control eating” felt like something you shouldn’t need professional treatment for; a competent woman would know just how to stop. I constantly felt inadequate for being unable to handle it on my own (a feeling that then, in turn, called for comforting with another binge). The years I suffered from binge eating disorder were a time of constant humiliation for me: I felt terror about whether I’d be able to eat in public without losing control and wanting — no, needing — to continue to eat, and shame about people seeing my body change.

When I was in high school, getting thinner and picking apart my food, my family noticed and forced me to get help I needed. But I was now on a college campus, isolated from people who knew me well. And though maybe one of these new people would have expressed concern for me if I had refused to eat and began to waste away, bingeing is something that the world collectively finds shameful and pretends to ignore. No one asked if I was OK. No one but the clerk at the minimart knew about the thousands of calories I took to bed each night.

I had seen therapists for my anorexia; binge eating disorder was something I dealt with alone, because I saw no other way. I kept telling myself I would change, that tomorrow, the habit would stop, that I would start eating healthy, become thin, become my best version of myself (one who jogs daily, and uses a bullet journal, probably), but every day I fell down into the same pit. It was like climbing a sand dune: I could see the sky, but the ground never held beneath my feet.

Today, people readily acknowledge the reality of anorexia, which, though recognized as an illness, also fits into the comfortable paradigm of what a woman is “supposed” to be—thin, precise, responsible. But even many people who are otherwise aware about disordered eating look away in shame at a woman who we perceive as having “lost control” around food. According to the National Eating Disorder Association, binge eating disorder is the most common eating disorder in the United States, “three times more common than anorexia and bulimia combined.” And yet, culturally, it’s the one we discuss the least. “Overeating” can so easily be painted as a charming quirk; think Miranda from Sex and the City pouring dish soap onto chocolate cake in the garbage so she wouldn’t eat it, or the way I used to tweet things like, “I need a full pizza and a pint of ice cream and also Twizzlers and Cheez-Its in my mouth right now,” masking my compulsion with the joke-y voice of the internet.

Whether because of my own embarrassment, or the social stigma around weight gain and women who binge, or my embarrassment due to of the social stigma, I never used to speak publicly about my binge eating disorder, even after I learned that it was a clinically recognized eating disorder. Back then, I wished that I could wrap those years neatly in the black plastic bag from the mini-mart and stuff it in the bottom of my trashcan, the way I did the wrappers I hoped nobody would find. But now, I want to be honest about my struggle with binge eating disorder, the same way I was honest about my struggle with anorexia. I wish I been taught that Binge Eating Disorder was legitimate mental illness when I was younger, something a person can ask for help with. I wish I had known that I didn’t have to deal with it alone.