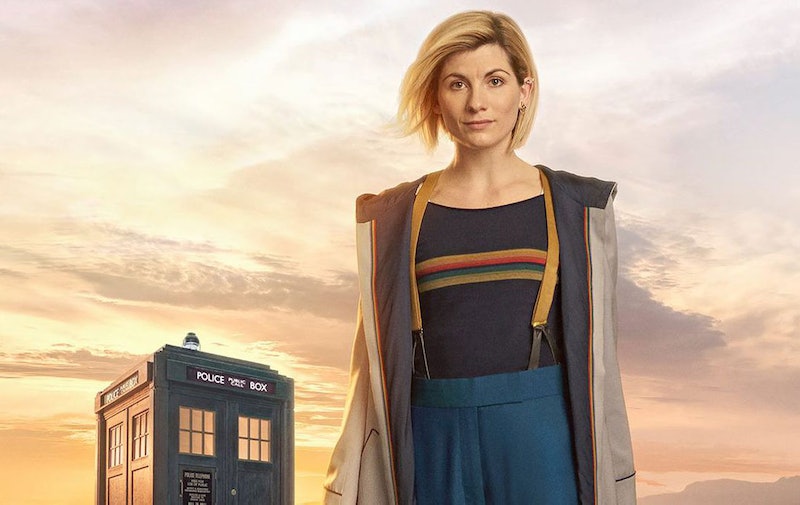 The 11th season of Doctor Who and first season with a female Doctor is just around the corner. However, while the show has been a staple for Brits for multiple decades, with family traditions organised around its Saturday evening showing, that's all changing this time around. Yep, the BBC has changed the series usual scheduled slot. So when is Doctor Who on TV I hear you ask? Well, from now on, you can get in your weekly dose of Yorkshire puds and Doctor Who on the same day, as the series is moving from Saturdays to Sundays.

Peter Capaldi, the 12th Doctor, had his final stint as the Time Lord in 2017's Christmas special, but 2018 is the year that Doctor Who will finally regenerate into a woman. The air date has now been announced, and you don't have to wait long until you get to see Broadchurch's Jodie Whittaker playing the Doctor, as the new series will debut on Oct. 7. A title for the first episode has also been confirmed, reports Digital Spy, as 'The Woman Who Fell To Earth', which isn't really giving much away. But Whittaker won't be tuning in, as she'll be "Somewhere far away, so I don’t watch it in the same time zone," she recently told Marie Claire.

New showrunner Chris Chibnall will be taking up the helm, and is set to shake up the Doctor Who universe. Not least because of his decision to move the show from Saturday evening to Sunday. "New Doctor, new home! Jodie Whittaker's Doctor is about to burst into Sunday nights — and make the end of the weekend so much more exciting," he told the BBC. "Get everybody’s homework done, sort out your Monday clothes, then grab some special Sunday night popcorn, and settle down with all of the family for Sunday night adventures across space and time."

Charlotte Moore, director of BBC content also said: "With Chris Chibnall at the helm and Jodie Whittaker’s arrival as the new Doctor we are heralding a brand new era for the show and so it feels only right to give it a new home on Sunday nights at the heart of BBC One’s Autumn schedule." This will be the first time in the show's history that it's taken up a Sunday night residency, but it feels like the perfect way to delay the back to work gloom.

As well as introducing a new Doctor, Chibnall's given her some new pals too. Whittaker will be joined alongside The Chase presenter Bradley Walsh who will be playing Graham, as well as Yasmin (Mandip Gill), and Ryan (Tosin Cole). And the writing team will be headed by people of colour for the very first time. Malorie Blackman, author of the Noughts And Crosses series, will be joining the team, as well as Skins writer Ed Hime, the Evening Standard reported. With a new Doctor and cast, and everything shaken up behind the scenes, I can't wait for the show with the time travelling scientist to come back to our screens.