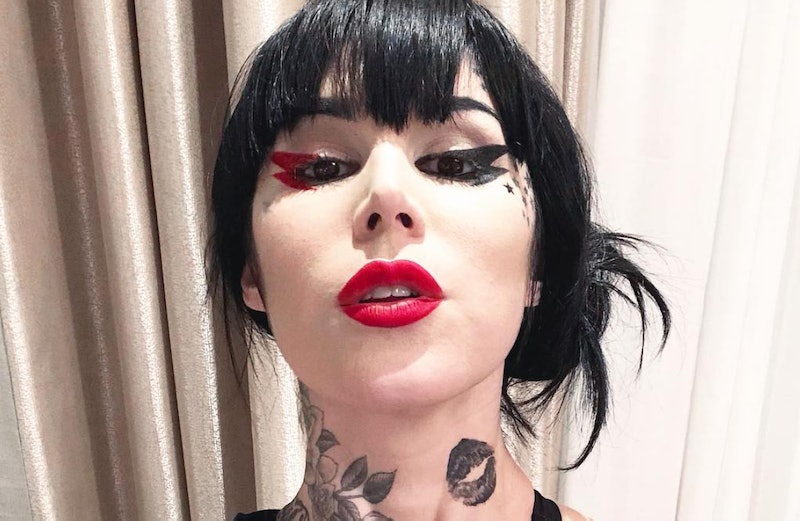 Has it really been a decade of Von D? Yes, it has. Kat Von D Beauty is celebrating its 10th anniversary this year. The beauty brand guru and celeb tattoo artist isn't going to let this makeup milestone pass her or her fans by without a proper observance. In fact, a Kat Von D tenth anniversary makeup collection is happening.

If you are hyperventilating and fanning your face with your hands to try and calm down, that's totally OK. Most Kat Von D-evotees are likely having the same reaction to this news.

Von D took to her personal Instagram to share a teaser video that she has been working on to herald the anniversary collection. The teaser features a red-lipped and gold-dipped model who glitters and gleams, as well as a dark-skinned stunner rocking an amazing neutral lip shade.

In the caption, Von D confirmed that the collection and campaign are launching in May. She also gave props to the muses who provide her with endless inspo on a daily basis.

She wrote, "I wanted to tell the story of @katvondbeauty through 10 of my modern-day muses. Some whom you may already know and others that you should! These 10 muses have blessed me with so much inspiration, not just for their surface beauty but with what they contribute to the world through their art."

Now that's 14 karats. While Von D didn't share any further details about what her anniversary collection will include, one cannot help but wonder if the clues are hiding in plain sight. While there be a glittery, gilded highlighter? A fresh take on red lipstick, which is a KVD and KVDB signature? The recurring gold motif in the clip has us thinking this collection might be unexpected and that it'll shine so intensely that it will communicate with satellites.

The brand has mastered the art of matte liquid lipsticks, black eyeliner, and foundation. It would make sense if the anniversary suite offered re-imaginations of those core products. Since Kat Von D is an artist, it wouldn't be a stretch for her to design limited edition packaging, too.

However, fans wouldn't be shocked or disappointed if the brand opted to try something totally newly with a golden collection.

Followers took to the comments section to pledge their devotion to the brand and its forthcoming anniv collection. Kat Von D customers communicate effectively with their dollars.

Same! While the video clip doesn't reveal any concrete information or details, fans are intrigued and all in. They want to know more.

This selection of comments encapsulates all of the feels. Supporters were sharing their experiences with the brand over the years and exchanging stories. Others noted references to other pop culture markers. Of course makeupistas are already obsessed with this teaser and are eagerly seeking an anniversary assortment of products. It will no doubt be epic and very Von D.

It's also worth remembering that Kat Von D Beauty is constantly adding new offerings to its repertoire and updating packaging and formulas. The beloved Studded Kiss lipsticks are creamier than ever in their new iteration.

The tattoo liner in Trooper has earned "iconic" status for its tip, its jet black pigmentation, its budge-proof formula, and its ability to craft a flawless, cat eye flick.

Will past products return? Will existing cult faves be revamped or refreshed with special edition packaging? We have wants and needs that are disguised as questions. The possibilities are endless and we can't wait for KVDB to start revealing what's in store.

Here's to another decade of decadent makeup.