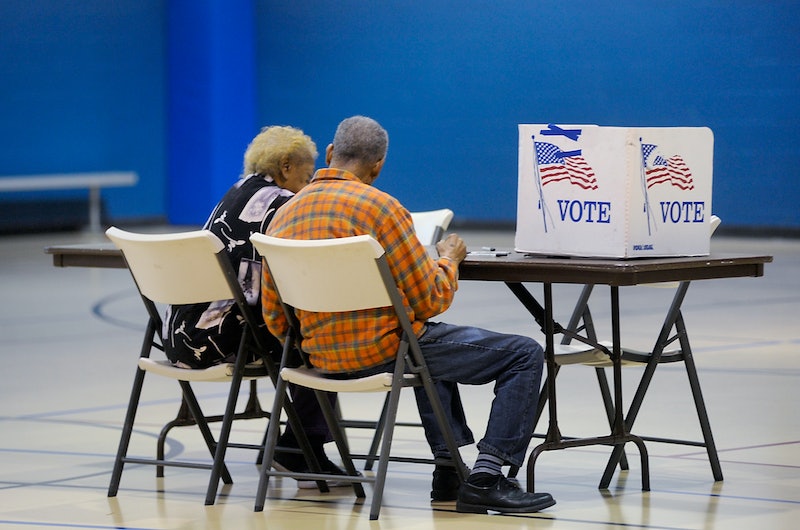 After several months of deliberation amid allegations of election fraud, North Carolina's new 9th District election will essentially serve as a do-over — but that doesn't mean the second election is taking place immediately. According to FiveThirtyEight, the new election could take as long as five months to complete, from start to finish, and will include both a primary and a general election. What's more, the North Carolina State Board of Elections hasn't established an official schedule yet.

The original election was never called, and remained undecided through to Thursday, due to an investigation into alleged absentee ballot fraud by Republican Mark Harris' campaign team, per NPR. Harris has continued to maintain his innocence against these allegations.

Via The New York Times, the board of elections voted unanimously in favor of a new election on Thursday. The board further confirmed that the investigation into the alleged fraud will continue in the coming months, per NPR.

According to The Washington Post, board chairman Bob Cordle gave the following statement on the decision to hold a new election:

It appears to me the irregularities and improprieties occurred to such an extent that they tainted the results of the entire election and cast doubt on its fairness. I believe the people of North Carolina deserve a fair election and deserve to have their votes counted properly.

As for Harris, who unofficially received the most votes in November by a margin of 905 votes, he confirmed his support of a second election on Thursday, as well.

In a statement via The New York Times, Harris said, “It’s become clear to me that the public’s confidence in the Ninth District’s general election has been undermined to an extent that a new election is warranted."

After the announcement that a new election would take place, Dan McCready, the Democratic candidate who ran against Harris last year, celebrated the decision, writing in a tweet:

McCready then followed up with a subsequent tweet asking for donations to help fund what will be his second run for Congress in the last 12 months. Harris has not officially indicated whether he plans to run or not in the new election.

It's worth nothing that it's not guaranteed that Harris will be the Republican candidate for the second election, or that McCready will be the candidate for his party, either. Since there's going to be a primary, there will be an option for both parties to elect new candidates, if desired.

According to FiveThirtyEight, this marks the first do-over of a congressional election since 1975. As The New York Times notes, the Ninth District in North Carolina will now be without representation for the indefinite future. The board of elections will likely release a proposed timeline for the new election within the coming weeks.