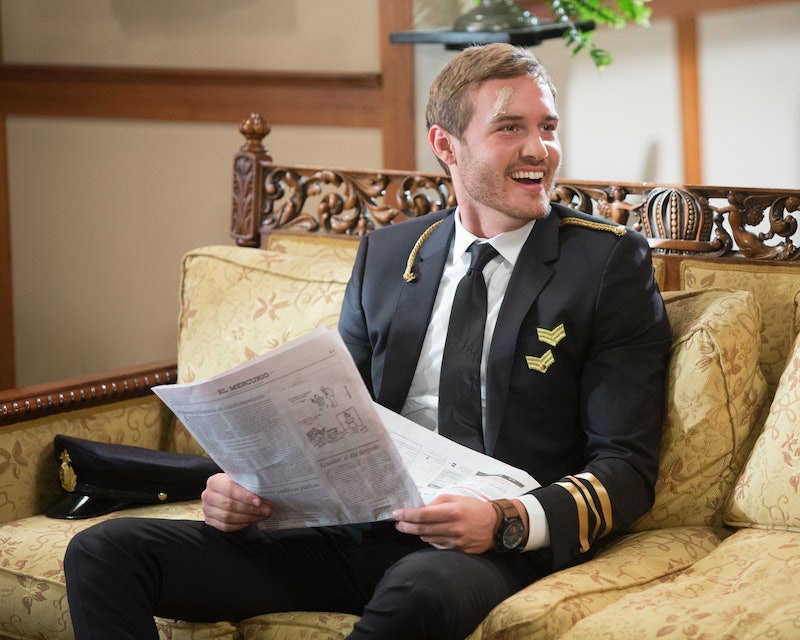 The latest season of The Bachelor has been one of the most unpredictable out of the show's entire 18-year run. With controversial airline pilot Peter Weber as the titular bachelor, the series' tumultuous 24th season has had fans asking more questions than any season in recent memory. And perhaps the most prudent question is when is Peter's finale on The Bachelor? ABC has yet to announce when the new season will come to a close, and Bustle has even reached out to the network but did not receive a reply. This state of limbo has left fans wondering just how much more of Peter's hijinks they will have to endure. So when will it end?

The bottom line is this: we don't yet know when the current season of The Bachelor will come to an end. However, there are clues that point to when it will likely hold its finale. Though unconfirmed, Bachelor blogger Reality Steve recently reported that the finale will air in two parts on back-to-back nights, with Part One airing on Monday, March 9, and Part Two concluding the season on Tuesday, March 10. The site also claims that this season's "Women Tell All" episode will likely air one week prior to the finale on March 2. Here's the full relevant quote from Reality Steve, but be warned that it potentially includes spoilers for who gets eliminated in the coming weeks:

A couple things I can confirm today in regards to scheduling. First off, the "Women Tell All" tapes next Friday the 21st. I’m assuming it’s running on March 2nd, the week before the finale as normal. My other confirmation is that there will be another 2 night finale this season on March 9th & 10th. So to me, that means we probably won’t actually see Victoria F. getting eliminated until Part 1 of the finale on Monday the 9th, which means she wouldn’t be at the WTA taping since she will have not been eliminated on screen yet, you can’t put her with the rest of the group. We’ll know next week if she is for sure, but, just know if Victoria F. is not at the taping next weekend, it’s because she isn’t eliminated on screen until the Part 1 of the finale that airs on March 9th.

Reality Steve based his findings largely on filming schedules, but the date of a March 9/10 finale also makes sense given how many episodes of the show remain. The format in past seasons calls for hometowns in episode 8, followed by another elimination in episode 9, followed by the "Women Tell All" special, followed by the two-part finale. If each of these airs in a separate week, then it puts episode 8 on Feb. 17 (which is confirmed), episode 9 on Feb. 24, "Women Tell All" on March 2, and the finale on March 9 and 10. The only wrinkle that could change this lineup is if ABC decides to air the "Women Tell All" in the same week as episode 9, like the network did in season 23. If that happens, then there's a chance the finale could take place a week earlier on March 2. But so far, the evidence suggests the later date of March 9 is the most likely.

It's unknown at this time just when Peter will give away his final rose on season 24 of The Bachelor, but you can be pretty certain that it will happen within the first two weeks of March.