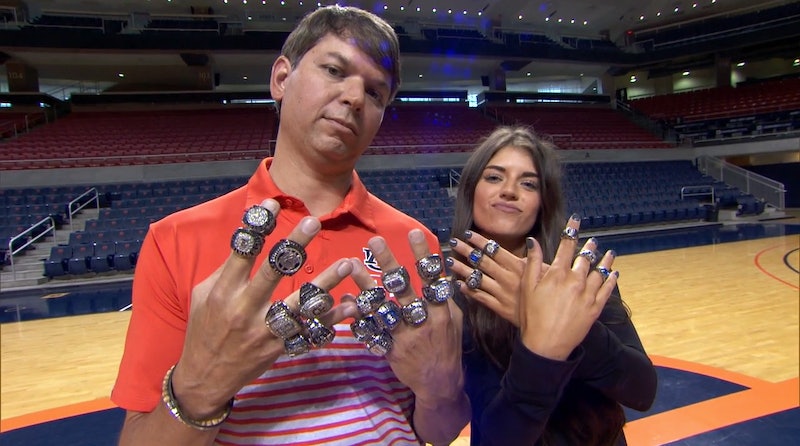 Since she first appeared on The Bachelor, Madison has been very open about her close relationship with her dad. She told Peter on their one-on-one date in Peru that she's looking for a husband who's similar to her dad, particularly regarding his Christian beliefs. Whether it's through family time, basketball, or religion, Madi's dad is a major role model for her.

Hopefully Peter was prepared for her hometown date, because it seems like there a lot of expectations he'll have to meet. "I look up to my dad so much," Madi told Peter in Peru. "The way that he has such a strong relationship with the Lord is the way that he is able to love our family so well." Given how their conversation about religion on their last one-on-one date went, it's possible that this could become a sticking point for Peter and Madison's dad.

But they may be able to pivot to other topics of conversation over dinner if things start to get weird. Madi is a four-time state championship basketball player and some credit has to go to her dad Chad Prewett, who was her coach at her high school Lee-Scott Academy. When he coached the team to its third-consecutive state championship in 2013, Madi was named the MVP by the opposing team's coaches. Proud papa Prewett told The Auburn Villager, "For the coaches, the other coaches to think that she's the MVP — it means a lot as a father ... after it was over it was like, 'Wow, that's pretty cool.' Win a state championship and your daughter is the MVP."

Since 2017, Madi's dad has been the director of operations of the Auburn Tigers, a top-ranked NCAA Division I Men's Basketball team. Before then, he served as special assistant to head coach Bruce Pearl. Last season, the Auburn Tigers made it to the final four in March Madness, so Madi's family knows a thing or two about winning if Peter chooses her at the end of The Bachelor.

Madi's dad is actually more active on social media than his daughter — well, at least on Twitter (his Instagram is rather sparse). So he shares his family's support of the team, calling himself, Madi, her mom, and her sisters the "Prew Crew."

According to her Instagram, Madi graduated from Auburn in 2018, but she has seemingly stayed involved in the school due to her dad's connections. She recently celebrated an Auburn win with none other than NBA legend and former Auburn Tiger Charles Barkley. She also teamed up with the Tigers head coach to promote the team's charitable AUTLIVE game for the fight against cancer.

The preview for Madi's hometown date shows that she is waiting until marriage to have sex — but that she hasn't told Peter yet. Hometown dates are uncomfortable as it is, and this revelation is bound to lead to some serious discussions between her and Peter. But even if the hometown date in Alabama goes south, you can probably expect to see Madi and her dad return to TV when March Madness hits.