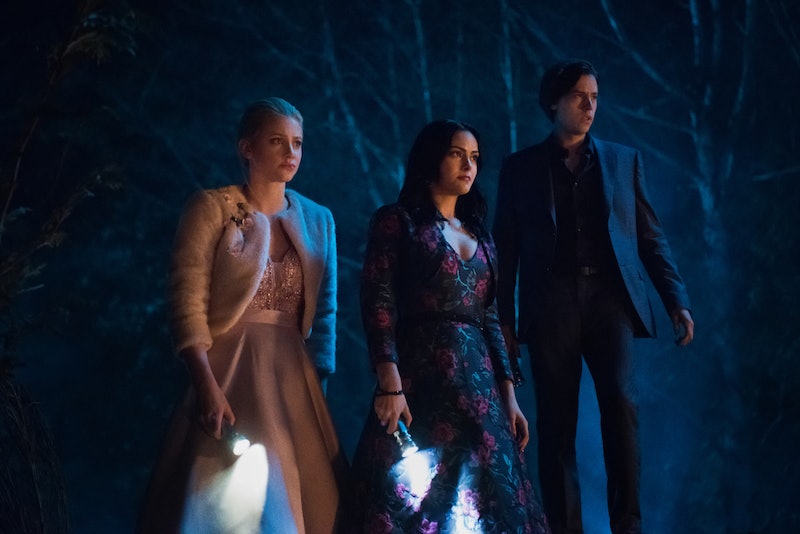 Spoilers ahead for the Riverdale Season 3 finale. Riverdale's Season 3 finale answered long-held questions about the Black Hood, the Gargoyle King, and The Farm. But the last 10 minutes teased a host of new mysteries we need addressed ASAP — starting with the exact date of Riverdale's season 4 premiere, because that cliffhanger has us reeling. Betty, Archie, and Veronica wouldn't really turn on Jughead like that, right?!

Back in January, the CW confirmed Riverdale was renewed for Season 4. If they stick to the schedule their last two seasons have followed, Season 4 should premiere in mid-October — though, of course, we won't know for sure until the network releases an official date. What we do know is that Bughead and Varchie are heading for a highly eventful senior year — and while their G&G and cult-busting days may be behind them, the aftershocks of those dark days have just begun.

Armed with missing parents, a new Bughead sibling, and the lingering effects of The Farm's brainwashing, the Riverdale creators have more than enough material for a season even crazier than this one. But in case they're still narrowing down plotlines, here are the six questions Season 4 definitively needs to answer.

1. Where Is Penelope Blossom?

After revealing herself as the supervillain of Riverdale — and a night of hunting Bughead and Varchie through the woods — Penelope Blossom escaped. Given that the last time she was left alone she spent months devising an elaborate board-game-slash-quadruple-homicide, I'd feel more comfortable knowing she's safely behind bars. (Although as Hiram Lodge and Hal Cooper can attest, it's not hard to continue wreaking havoc from a Riverdale prison.)

2. Where Did All The Farmies Go?

Poor Kevin. While everyone was distracted with that aforementioned hunt, everyone in The Farm — except Kevin, who was left behind to tell their story — "ascended." It's not clear what "ascending" means, but Alice and Polly Cooper, the Evernevers, and all the other Farmies have disappeared. Season 4 needs to show Edgar Evernever being brought to justice, preferably by handsome FBI agent Charles Smith.

3. What Is Cheryl Doing With Jason's Corpse?

In one of the sadder moments of the finale, Cheryl beams at Jason's corpse: "Welcome home, JJ!" While Cheryl seemed horrified when she realized what Edgar had done, this scene suggests she's having a harder time letting go of those "conversations" with Jason that The Farm provided. Hopefully, Toni will be able to snap her out of it — but when it comes to Jason, Cheryl has a bad habit of clinging to fantasy.

4. What Is Hiram Planning For Veronica?

Honestly, why even send Hiram to prison? He may be locked up, but he's still up to his old tricks — now, he just gets to work out in a private gym. Hopefully, Veronica will be smart enough to know her father is coming for her and prepare for the worst. But given that recent Varchie reunion (my heart!), Archie should be prepared too — I have a feeling that last boxing match didn't exactly repair his and Hiram's relationship.

5. How Long Have Charles & Alice Been Working Together?

Alice's turn as a devoted Farmie was so convincing — and honestly not that out of character for her — that the reveal that she's been working as an informant for the FBI came as a genuine shock. When did Charles first approach her, and how did this plan come together? I believe (kind of) that everything Alice did was for the good of the investigation, but it sure seems like she let a lot happen to Betty and her friends along the way. If there's an explanation to be offered, we better hear it.

6. What Happens Over Spring Break?

Finally: that crazy flash-forward to Betty, Veronica, and Archie standing half-naked and covered in blood, throwing their clothes into a bonfire. The implication seemed to be that they had killed Jughead, but I don't believe Riverdale would kill off someone that central, and especially not at the hands of his supposed BFFs, would they?! Either way, all of these characters are too mentally frail to handle committing a murder — so if that's what it is, we're in for a very dark and guilt-ridden Season 4.

On the bright side, if Riverdale's next season is anywhere near as insane and bewitching as Season 3, half these questions won't matter by the end of Episode 1. That's the Riverdale guarantee.