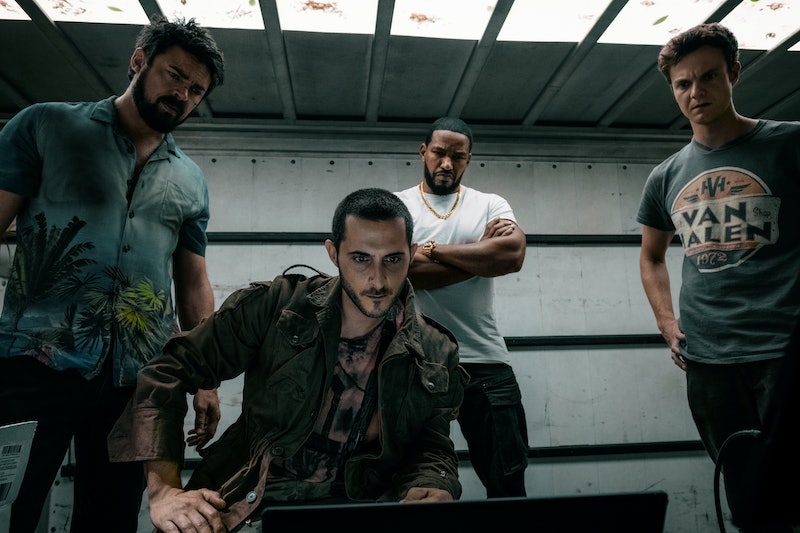 What happens when superheroes use their powers for bad, not good? Amazon's new dark comedy The Boys, debuting July 26, will dive into a world where the so-called saviors do some pretty horrific things — including literally getting away with murder — and face zero consequences. That is, until a group of vigilantes decide to do something about it. You'll have to watch to see which side comes out on top, but The Boys was renewed for Season 2 ahead of its release, so you know there's plenty more action in store. And there's already a new face to look forward to when The Boys Season 2 premieres: as reported by Variety, Aya Cash will join the cast as a character named Stormfront.

Per Deadline, The Boys is based on an adult-rated comic series by writer Garth Ennis, whose Preacher comics were adapted for the AMC show of the same name. The Boys follows a group of superheroes (aka "supes") called The Seven — a play on the Justice League — who are treated like celebrities and gods among men. They're backed by Vought, a multi-billion dollar company that manages their careers and covers up their sordid deeds. The only exception is Annie "Starlight" January, a young and idealistic hero who suffers horrible abuse and moral dilemmas when she gets her "dream job" as a member of The Seven.

Enter The Boys, a vigilante group comprised of Hughie, Billy Butcher, Mother's Milk, Frenchie, and The Female, who come together in an attempt to expose The Seven and make them pay for their crimes. Per CBR.com, The Boys comic ran from 2006 to 2012 with 72 issues before being canceled due to its mature, often controversial material. It's not clear how much of the comics will be covered in Season 1, but there's certainly a lot to pull from for Season 2 and beyond.

As far as how closely the Amazon version will stick to its source material, Boys co-creator and executive producer Eric Kripke told Business Insider they did have to make some changes. "We knew we would have to adjust the story because the formats are different," he said. "The comic structure is very procedural and episodic. Every couple issues there's a new mystery. It would almost work if CBS were Rated X. You could adapt it page for page. But with the format of streaming, they want you to be able to [marathon] the show. The medium itself demands serialized storytelling to last over eight hours. So, we remixed elements of the story that we loved."

For Kripke, it was most important to make sure the essence of the story and its characters remained the same, while also tackling issues that are more relevant today. According to Kripke, The Boys will cover topics including sexual assault, the negative effects of social media, and the intersection between celebrity and politics.

Fans of the comic won't be surprised by the show's blunt humor, gore, or graphic sex scenes, but viewers who are new to the series may be shocked to see heroes like Homelander (Antony Starr), a Superman/Captain America mashup, and A-Train (Jesse Usher), a speedster like The Flash, making some unthinkable choices. And the choices made by The Boys' unpredictable and relentless leader Billy Butcher (Karl Urban) and his new protégé Hughie (Jack Quaid) are definitely going to be shocking too.

Hopefully, though, the TV show will be able to satisfy the comic's die hard fans while also appealing to a new audience. It's unclear exactly when The Boys Season 2 will premiere — streaming returns can run anywhere from six months to several years — but at least you can rest easy knowing there will be more, whatever Season 1 has in store.

More like this
Netflix Shut Down 'Bridgerton' S3 Rumours About A “Very Dark” Storyline
By Bustle
'The Queen’s Gambit' Season 2 Tweet Wasn’t From Anya Taylor-Joy
By Mary Kate McGrath, Jack Irvin and Grace Wehniainen
The 'Gossip Girl' Reboot Creator Is “Looking For A New Home” To Air A Potential Season 3
By Brad Witter
'The Last Of Us' Has Officially Been Renewed For Season 2
By Darshita Goyal
Get Even More From Bustle — Sign Up For The Newsletter
From hair trends to relationship advice, our daily newsletter has everything you need to sound like a person who’s on TikTok, even if you aren’t.