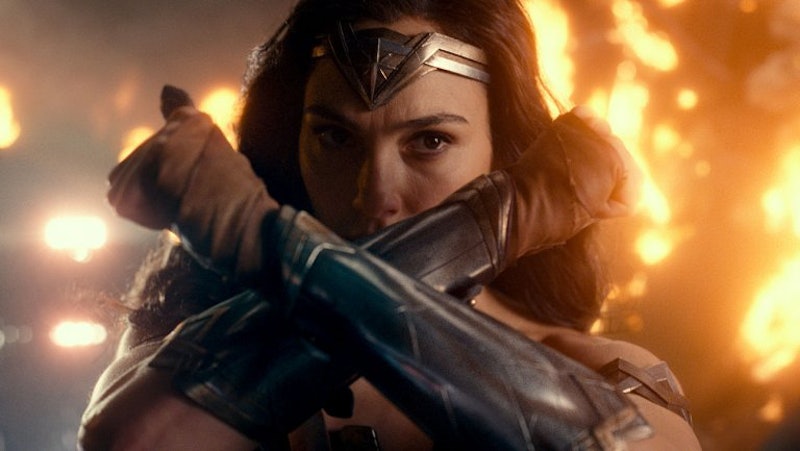 The seas of fandom are churning to a froth on the cusp of Aquaman hitting theaters on Dec. 21. But as Jason Momoa's burly reboot of the Atlantean hero finally gets his own feature expansion, will any other Justice Leaguers join the underwater fight for justice? Superman's a solidly midwestern boy with no oceanic experience, and Batman's a city guy through and through, but what about another royal friend surrounded by the sea? She spent her entire life on the island of Themyscira, but does Wonder Woman appear in Aquaman? Given DC's planned films, timelines, and overlaps, it's a long shot.

Fans have been introduced to every other member of the Justice League in a solo star vehicle, except for the Flash and Cyborg (and they're reportedly getting their own movies come 2019 and 2020, respectively). But it would be understandable if the powers at DC had worried that Aquaman might not be able to support an entire feature without tying him in with one of the Big Three: Batman, Superman, or Wonder Woman. Until his recent DC Universe reboot, Aquaman's been...sort of a joke, really, with even South Park busting on the friend to all fish with Super Best Friends' "Sea Man." But with Momoa's casting, this Arthur is a version of the character that fans all over the world have really responded to. According to ComicBook.com, the film already trounced Wonder Woman's box office in China, breaking records.

Plus DC has big plans for the warrior of Love and Justice. Director Patty Jenkins is back on board for a prequel called Wonder Woman: 1984. The film was pushed back to a 2020 release date, but USA Today reports that it features Wonder Woman (Gal Gadot) squaring off against a very land-bound foe, Cheetah, played by Kristin Wiig. Two characters seemingly return back from the dead as well. Chris Pine and Robin Wright are back and reprising their roles too, though Wright's Antiope is reportedly strictly in flashback. As for Steve Trevor, seemingly killed at the end of Wonder Woman and inspiring Diana to fight for love and humanity... he's back! That's all we know! So don't go looking for him in Atlantis either.

Spoilers for Aquaman. It was always unlikely, but Diana Prince a.k.a. Wonder Woman does not appear in Aquaman's standalone, nor is there any explicit reference to her or any of the other Justice Leaguers.

For those dreaming of what might have been, Jason Momoa talked to Screen Rant about a scene between the two superheroes standing at Superman's grave that was deleted from Justice League. "I, like, pull out my little flask and am, like, 'Here.' And it's Wonder Woman. She's like, 'No, thank you.' She's such a lady, you know! I'm such a — just a big dumb-dumb," he recapped.

But fans shouldn't lose hope of a sea-based Warrior crossover just yet - talking to The Hollywood Reporter, Amber Heard, who plays sea royalty Mera in Aquaman, said she wants to see her character and Wonder Woman team up for a spinoff. "That would be a kick-ass duo right there," she said. "Go for it, Warner Brothers."