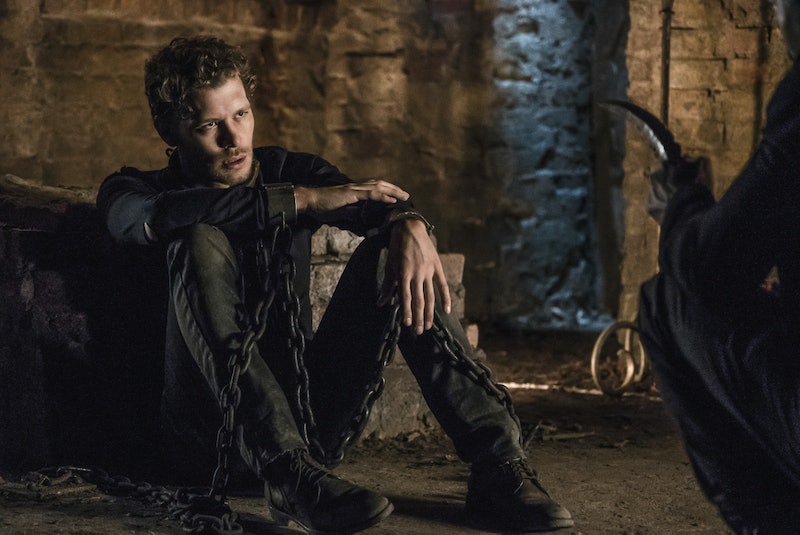 We won’t have to wait long after the series finale of Vampire Diaries for more vampires in our lives. The Originals returns March 17, just one week after we say good-bye to the Mystic Falls crew forever. I'm still crossing my fingers that some of the Vampire Diaries cast will go to The Originals, but we don’t know anything for sure yet. We left off in a very dark place for the Mikaelson siblings and the original vampire family has been in that place for a very long time. The Originals Season 4 is set to take place five years after the events that ended last season. I know, it’s been a very long time, so let me remind you.

All of Klaus’ foes descended upon New Orleans for revenge in the Season 3 finale, headed by none other than Marcel Gerard who’s basically transformed into a super hybrid. In a quick fight, he manages to bite both Elijah and Kol, while another vampire poisons Freya. Rebekah is already suffering from a curse that’s turning her into a ripper. Klaus is put on trial for his past transgressions and Marcel decides to stab him with Papa Tunde’s blade, which keeps him alive, but tortures him mentally. Freya uses Klaus’ life to spell all the siblings together, putting the rest of them in a deep sleep while Hayley leaves New Orleans to find a cure for all of them.

Now that you’ve been refreshed, we need to talk about what we need to see this season.

I’m ready to see the littlest wolf show us what she’s got. She’s talking and walking now, it’s only a matter of time before her powers start to show, if they haven’t already. I imagine that between Klaus and Hayley, little Hope is going to be pretty freaking powerful.

It’s been five years since the Mikaelson family have all been together and it’s time for them all to wake up and have a nice family reunion. One that doesn’t involve death would be preferable, but when has that ever happened?

A New Love Interest For Klaus

Cami was killed off last season and yeah, I liked whatever Klaus and Cami had going on, but I am a bigger fan of finding him someone new. Maybe Caroline Forbes, perhaps?

Marcel Put In His Place

Marcel is constantly trying to take down the Mikaelsons and pretty much always fails. He had to become a new kind of beast just to get on an even playing field as them. He needs to be taken down a notch in this season and put back in his place.

Speaking of Marcel, it’s time for a new villain. A great new villain would be preferable because I can’t watch an entire season about Marcel and the Mikaelsons again. We need things to be switched up.

They were finally hooking up in the Season 3 finale before all this stuff happened and now it’s been five years. I just want Elijah to find love and be happy. He deserves it considering Klaus pretty much killed all the women he’s loved in the past. We need Hayley and Elijah to reunite and stay together.

Davina Claire can’t really be dead forever, can she? I would like to think that Kol, maybe with the help of Marcel or Vincent, will find a way to bring her back from the dead. I don’t think we we’re done with her.

Hayley has always been a badass, but the Mikaelsons were always protecting her and she never really had her moment in the spotlight. Now that the Mikaelsons are out of the picture for the moment, it would be great to watch her shine and fight off the bad guys herself.

We're rooting for you, Mikaelson fam.