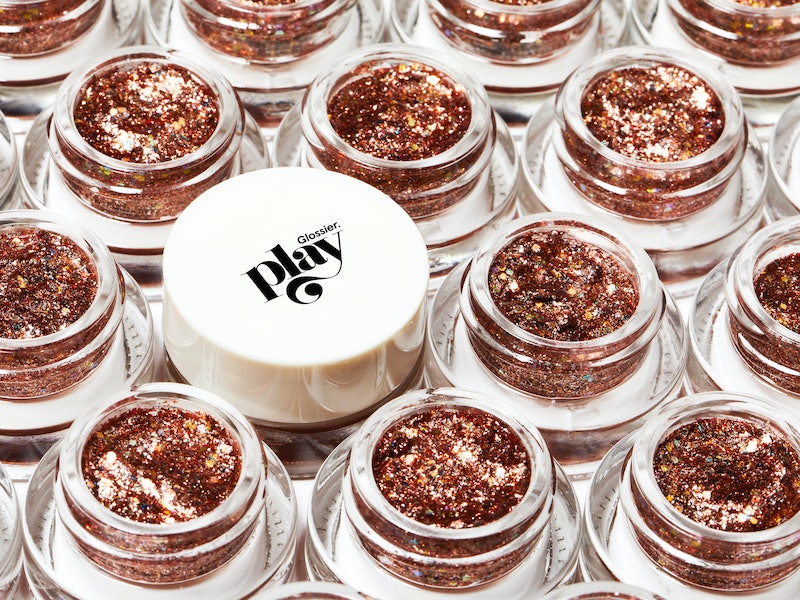 Since its inception in 2014, Glossier has steadily built its reputation as a beauty brand that offers a minimalist repertoire of simple, classic products — from the fan favorite Milky Jelly Cleanser to Cloud Paint Cream Blush. However, Glossier just launched Glossier Play, a fun spinoff brand whose selection of offerings focuses on bold, bright pops of color and new formulas, including glitter. This is surprising, new aesthetic territory for the normally minimalist Glossier, but it's beautifully executed.

The major difference with this offshoot brand is that everything, like the adventurous colors to the ultra shimmery textures, is so unexpected. Glossier offering a glitter gel might have seemed out of the realm of possibility before. But fans now have more options to express themselves through color cosmetics with Glossier Play.

Glossier Play arrived on March 4 with four high-impact products. There is a total of 28 shades across the core beauty products, along with two tools. More specifically, Glossier Play debuts with 14 eyeliners, six lip lacquers, four highlighters, four glitter gels, a sharpener, and an applicator.

Glossier loyalists will recall that the brand originally kicked off with only four products. The cycle is repeating itself in an entirely new but just as stunning way.

More colors, more textures, and more products are planned for the future, according to the press release received by Bustle. This initial assortment is merely a selection of what's to come — and it's incredible.

Glossier Play items are available for individual purchase via the brand's website. However, you are invited to mix and match and create your own Glossier "Playground." It's bundle and for just $60, you get one of each product, plus both tools, all the while saving $15.

Here's a rundown of the Glossier Play products.

The highly pigmented Colorslide pencil can be used on the lash line or along the waterline. The smooth formula doesn't skip, smudge, tug, or crease. Colorslide comes in 14 matte and metallic shades.

The mega shiny Vinylic lacquer is efficiently packaged in an easy-to-apply click pen. It glides on like a dream and there's no goopy and sticky mess to deal with. Vinylic is available in six hues.

Glitter can be tricky to apply. But with Glossier's Glitter Gelée, it's so simple. The one-step product comes in four color options, wears comfortably, will stay put for 12 hours, and adds a jeweled finish to skin. Glossier does not recommend using this product on or around lips.

Nightshine is a buildable, liquid highlighter designed for use on the cheekbones, brow bones, Cupid’s bow, and eyelids for a radiant glow. There are four shade choices.

What a multitasker. Blade sharpens your Colorslide pencil liners and keeps them in shape, catches the shavings, and minimizes the mess.

This tool was specifically engineered to be used with the Glitter Gelée. It's the secret weapon that helps apply the product evenly.

All of the Glossier Play products are, well, playful. It's time to get creative and craft some glittery, shimmery looks. Play, slay, repeat.