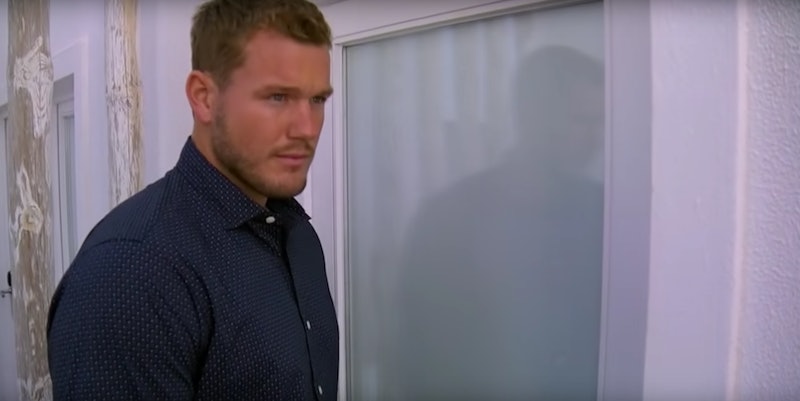 Ever since before Colton's season of The Bachelor aired, Chris Harrison and other Bachelor Nation faves swore up and down that it really would be one of the most dramatic and surprising seasons to date. But, fans just shrugged and waited for the premiere, because that's what they always say. But after the airing of the two-part fantasy suite episode, it's clear that they weren't kidding. Cassie left, Colton's crushed, and Hannah G. still hasn't gotten her fantasy suite date. The traditional Bachelor schedule has been officially thrown off, but figuring out when Colton's Bachelor finale was filmed might help fit the pieces together.

According to Colton's Twitter feed, he and The Bachelor crew are going to be offering live commentary during the two-part season finale on March 11 and 12. However, the footage they'll be narrating was filmed months ago. According to Us Weekly, filming for Colton's season began on September 21, and like most seasons, it was expected to run eight weeks. Even though Colton jumped the gun (and the fence) by confessing his exclusive love for Cassie during their fantasy suite date, it seems that his season lasted the full run, with maybe just a few days to spare.

In past seasons of The Bachelor and The Bachelorette, the final rose ceremony has taken place sometimes in the same place as the fantasy suite dates or in other areas close by. This time, though, it's not clear what exactly went down or when, given everything that went down. There won't be a traditional rose ceremony or normal finale, so going off of past filming schedules isn't much of a help.

The fantasy suite dates were in Portugal, but now that Colton has jumped the fence and declared his love for Cassie, it's possible that he'll send the women home and head back to the U.S., too. It's possible that he'll spend some part of the finale making amends with Cassie or at least seeing her again in California...but after that, it's unclear what happens and what the filming schedule was like.

However, on November 17, Colton posted a photo on Instagram with the caption, "Spoiler alert: I’m back." That likely meant that he was done with filming for the entire season, so its safe to say that the finale was filmed someone time in early November. No matter when they filmed footage for the the final two episodes, he probably also had to spend a couple days shooting b-roll footage (like all of those shower scenes?) Regardless, filming seems to have ended mid-November.

Chris Harrison and The Bachelor crew are sticking to their guns about more impending surprises, so there could be something fans are missing as they're planning their watch parties for these finale episodes. They still managed to schedule a two night event, which means there is story left untold. Or there will be more live proposals, like the multiple that took place on Season 23 premiere night. As adorable as those were, the former would be much more impactful.