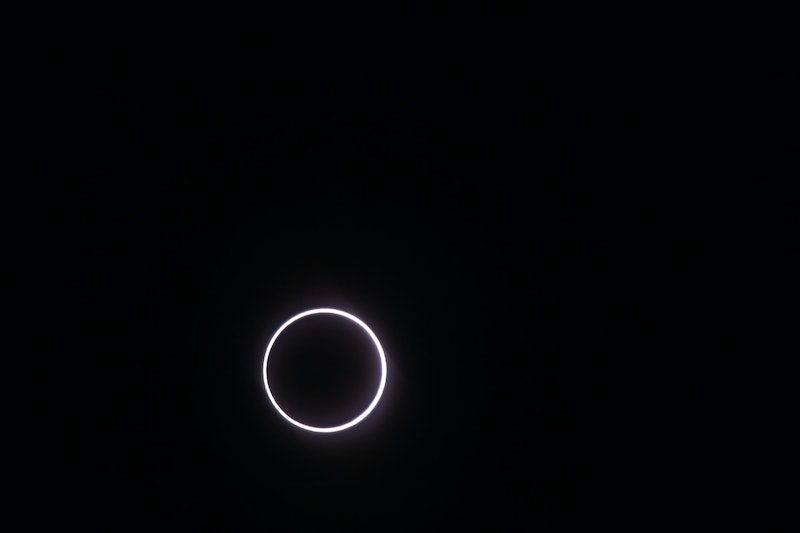 In case you haven't heard it from your parents, your mailman, and the ghost that may or may not be casually haunting your apartment, there is a total solar eclipse happening in the U.S. on Monday, Aug. 21, and people are pretty darn excited about it. People are so excited that even Neil deGrasse Tyson, the person who gives The Most when it comes to getting excited about science, just basically tweeted to tell us all to calm the heck down. In the midst of all this sun stanning, you're probably wondering — when was the last total solar eclipse in the U.S., and exactly how rare are they?

Quoth our dear science bro Neil, "Total Solar Eclipses occur somewhere on Earth every two years, or so. So just calm yourself when people tell you they're rare". And while that is absolutely true, the reason people are getting excited about this particular total solar eclipse is that on Monday, for the first time in 38 years, portions of the U.S. will be directly in the path of totality for the eclipse — meaning that the entire U.S. will be able to observe at least a partial version of the eclipse, and the select few regions on that path will be able to experience a total eclipse's darkness.

The map above shows an overview of which regions of the U.S. will be able to experience a total eclipse; the states on them map include Oregon, Idaho, Montana, Wyoming, Nebraska, Kansas, Missouri, Iowa, Illinois, Kentucky, Tennessee, Georgia, North Carolina, and South Carolina.

It's important to note, though, that you have to be within the boundaries of the path of totality to see the full eclipse, not just within the state. This video gives a more detailed look at the areas that will experience totality this Monday, with the sun completely blocked for periods ranging from two minutes to two minutes and 40 seconds.

If you aren't on the path of totality for this eclipse, you still have time to get there — just be warned that a lot of the major cities on that path are expecting influxes of millions of visitors, so the traffic and hotel rates might be a little rough. If you want to start planning ahead in the meantime, the good news is that we're going to have to wait a significantly shorter amount of time to see the next one — the next total solar eclipse visible from the U.S. will occur on April 8, 2024, with a path of totality coming up from Mexico through Texas and extending Northeast toward Maine and Upstate New York.

For more information on when the eclipse will be visible on Monday depending on your location, visit NASA's webpage here; and don't forget no matter where you're viewing it from to wear solar eclipse glasses! Safety first, y'all.