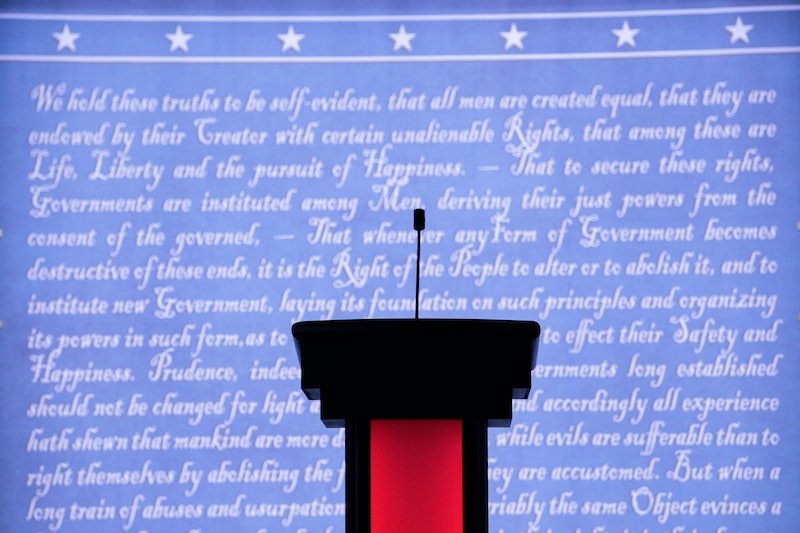 The 2018 midterms wrapped up with close gubernatorial and senator races officially called and certified. But it's not time for a breather just yet. Instead, it's clear some politicians already have their eyes on challenging Trump. But when 2020 presidential candidates will announce their run remains up in the air. There isn't a specific date that candidates must announce by, but they do need to have a campaign on its legs in time for the caucuses and primaries.

The first Democratic caucus of 2020 will be in Iowa on Feb. 3, 2020, according to the Des Moines Register. After that, New Hampshire, Nevada Democrats, and South Carolina Democrats will hold a caucus or primary, before we reach the behemoth that is Super Tuesday on March 3. California will be included in Super Tuesday for the first time in the 2020 election cycle, according to The Hill.

On the Republican side, Texas Sen. Ted Cruz announced his presidential campaign in March 2015 at Liberty University, in Virginia, and Cruz spent a lot of time in Iowa courting voters. Donald Trump announced his candidacy in June 2015 with that infamous ride down the Trump Tower escalator. The Iowa Republican caucus was also on Feb. 1, 2016.

In the 2008 election, Clinton announced her candidacy in January 2007 via her website, according to The Washington Post. "As a senator, I will spend two years doing everything in my power to limit the damage George W. Bush can do. But only a new president will be able to undo Bush's mistakes and restore our hope and optimism," Clinton wrote in her announcement letter, according to the Post. Then-Illinois Sen. Barack Obama announced his presidential campaign in February 2007, according to ABC. Obama was only 45 at the time.

But regardless of age, the Democratic 2020 field in particular is likely to be incredibly crowded. Statistical analysis news site FiveThirtyEight compiled a list of a couple dozen people who are "behaving like" presidential candidates right now. This could mean they're showing up at political events in early primary or caucus states, are the subject of major magazine and newspaper profiles, or were involved in campaigning for 2018 midterm candidates. According to FiveThirtyEight's criteria, Sanders and Biden are acting like they might launch a presidential campaign, as are Montana Gov. Steve Bullock, New Jersey Gov. Cory Booker, former Secretary of Housing and Urban Development Julian Castro, New York Sen. Kirsten Gillibrand, and California Sen. Kamala Harris. Of course, that's just speculation. Additionally, that list only represents a handful of possibilities.

So, it you're wondering who will attempt to challenge Trump in 2020, you'll probably have to wait a few more months to find out. But once those politicians announce they're running, things are going to get pretty busy.