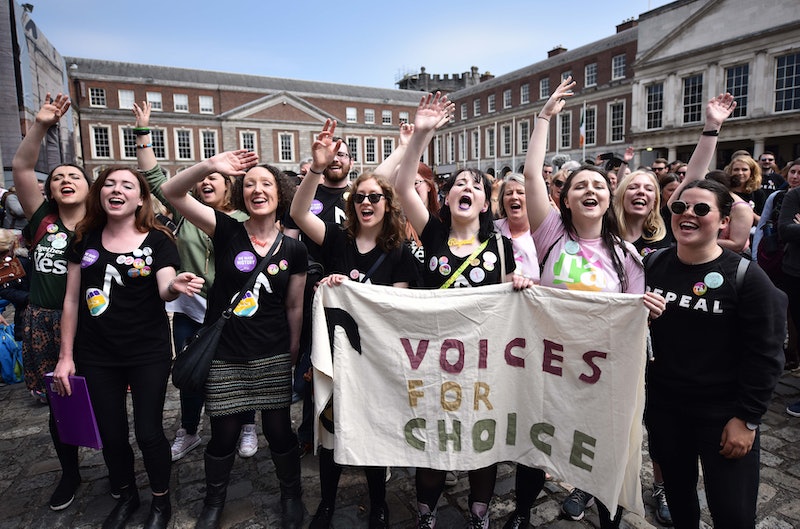 It's been seven months since the vote to #RepealThe8th Amendment, so you may be wondering when abortion will officially become legal in Ireland. There's some good news for reproductive rights activists: The date is less than two weeks away.

Abortion will become legal in Ireland on Jan. 1, according to Rewire.News. It will also be free at that time because abortion is eligible for coverage under a long-running program called the Maternity and Infant Care Scheme. Importantly, though, you will only be able to terminate your pregnancy up to 12 weeks. But in the United States, for example, 91.1 percent of abortions occur at or before 13 weeks, according to the Centers for Disease Control and Prevention.

On May 25, Ireland voted to overturn its 8th Amendment, which declared that a woman and her unborn fetus have an equal right to life. Because the amendment was part of the country's constitution, lawmakers were prohibited from changing an abortion ban that had been around since 1861, per the BBC.

The Irish Parliament finally passed a bill that legalized abortion earlier this month after voters repealed the ban. Reproductive rights activists say that the measure has many flaws, per Rewire.News, but believe it's an important step in the movement. Advocates vow to continue pushing for further reforms.

The #RepealThe8th campaign passed with two-thirds of the vote back in May, indicating sweeping support for abortion reform in the country. But it's still taken months for legislators to accomplish legalization. According to a Dec. 6 statement from the Abortion Rights Campaign, over 1,650 pregnant people have been forced to travel out of the country to terminate their pregnancies since the repeal vote, while hundreds have illegally imported safe abortion pills. "The cruel reality of the 8th Amendment continues," said Linda Kavanagh, the campaign's spokesperson.

But not for long. Pregnant people in Ireland will finally be able to legally terminate their pregnancies starting in January. Most people getting an abortion will be given a pill, according to Rewire.News, while some will have a surgical procedure. Abortions will generally only be allowed up to 12 weeks, but doctors may make exceptions if the continuation of the pregnancy could cause "serious harm to the health of" the mother. There's also three-day waiting period for everyone.

Abortions won't necessarily be available everywhere. Physicians still have a right to conscientious objection if they don't feel comfortable doing the procedure, per Rewire.News. But Ireland is creating a 24-hour hotline to provide information about doctors who will perform it — and conscientious objectors are required to send people to that hotline or to a willing physician.

"We know there are many pro-choice, patient-centred doctors who are ready and willing to give pregnant people the healthcare they need," Kavanagh said in the release. While activists have raised concerns about the wait times that could arise for this more limited group of physicians, there's also a lot of optimism around the imminent reform.

"While the debates continue, there are pregnant women and people all around this country quietly awaiting basic healthcare come January," Kavanagh said. The Abortion Rights Campaign added that "this is a momentous step towards achieving abortion rights in Ireland."

More like this
Eurovision Has Been Given A Whole New Look Ahead Of Its Liverpool Debut
By Bustle UK
This Is When Netflix Is Going To Start Charging You For Sharing Passwords
By Darshita Goyal
6 Organizations Fighting Police Brutality That You Can Support Right Now
By Syeda Khaula Saad and JR Thorpe
Here’s Where The NHS Nurses’ Strike Currently Stands
By Sophie McEvoy
Get Even More From Bustle — Sign Up For The Newsletter
From hair trends to relationship advice, our daily newsletter has everything you need to sound like a person who’s on TikTok, even if you aren’t.