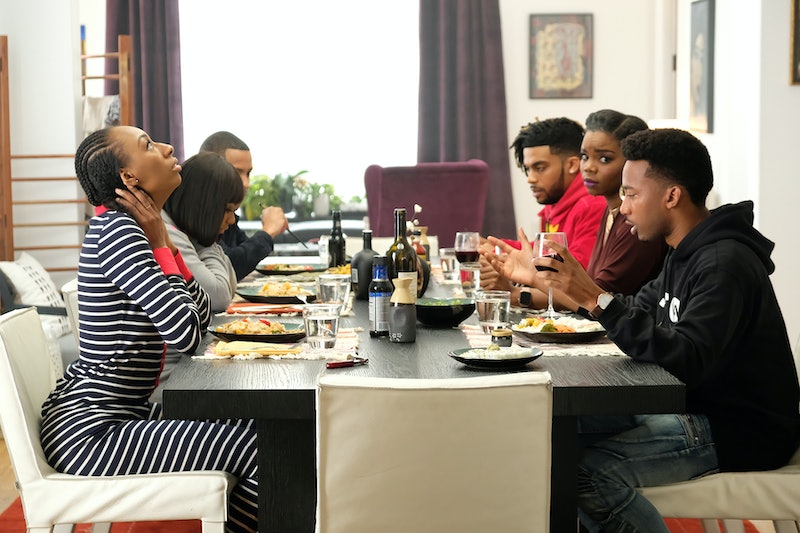 Well, that was fast. Boomerang’s 10-episode first season is wrapping up on April 9 and it covered so much ground in a short amount of time with a fresh story about Simone, Bryson, and their friend group. The show tackled tough topics like sexual assault, religion, the aftermath of divorce, millennial woes, and estranged parental relationships yet it still had a fun vibe that infused 90’s culture into a modern dramedy series. Fans will certainly miss this Tuesday night fix and have one big question on their minds — when will Boomerang Season 2 premiere? There’s no firm date for next season yet, but hopefully the answers will come soon.

BET dropped the renewal announcement right before the show’s penultimate #MeToo focused episode, per TV Line. It was thrilling news for fans of the new series as well as Boomerang Executive Producer Lena Waithe, who took creative control of the series, and Halle Berry, who starred in the original Boomerang film as Angela. Waithe released the following short statement about the news:

“Making Boomerang has been one of the highlights of my career and the positive feedback we’ve gotten from fans and critics has been so validating. I’m beyond excited to dive even deeper into these characters’ lives in Season 2.”

It’s possible that Boomerang Season 2 could start filming sometime this summer preparation for the fall TV rush. This would make sense because the network is trying to build up their original programming offerings, so they don’t want to keep viewers waiting for too long. However, Lena Waithe is all about delivering quality material to fans, so she might decide to take her time with developing the character’s next story arc. This might mean no more Boomerang until 2020, which seems like forever but good TV is totally worth the wait, right?

In the meantime, the Season 1 finale will probably have fans reeling based on a sneak peek that shows trouble in Simone and Bryson’s fledgling relationship. In the clip, Crystal asks Simone and Tia to look at something that was presumably posted on social media. It’s not revealed what’s on the phone, but for some reason Simone seemingly links up with her ex-fling.

Meanwhile, the guys are having a drink at the bar while Ari says that they are all “animals” and “temptation is real.” Yep, it definitely sounds like Simone may have cheated on Bryson already.

Of course, Bryson is crushed and the pair share a tear-filled moment as he accuses her of being “just like her dad,” which is a pretty low blow considering his past. A Simone and Bryson break up would be a major cliffhanger that effects the friend group in Season 2. Everyone will have their staunch opinions about who is right (or wrong) and it might sadly lead to no more dinners or game night’s at Bryson’s house. Their relationship aside, there is so much more to explore, including Ari and Tia's career moves, David's continued journey as a Christian millennial, and Crystal finding her new path post-Graham Agency shutdown.

Hopefully, fans won’t have to wait too long to see if Simone and Bryson can repair their relationship and keep their friends together in Season 2.