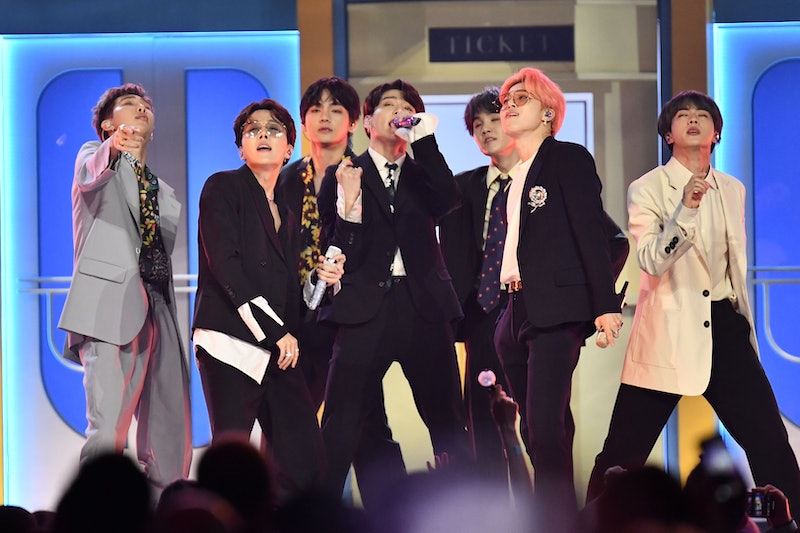 K-Pop superstars BTS have enjoyed world domination following the release of their 2018 album Love Yourself: Tear, which reached the top of the U.S. album charts — and the South Korean boyband experienced similar success on this side of the pond back in April, when BTS's latest EP, Map of the Soul: Persona, hit the UK album chart top spot. In addition to music, it appears BTS are set to conquer the world of film yet again — because the band are set to release their third cinematic masterpiece. But when will Bring The Soul: The Movie be out in the UK?

According to the Metro, the seven-piece band are set to release their latest flick on Wednesday, August 7, which means Bring The Soul: The Movie is right around the corner. The CEO of Trafalgar Releasing, Marc Allenby, first announced the film's release date back in June. In a statement, he said, "Trafalgar Releasing is thrilled to collaborate with Big Hit Entertainment again for Bring The Soul: The Movie. (Their fans) the ARMYs are truly a community, and we are excited to bring them together for an all-new BTS experience in cinemas worldwide."

As reported by the BBC, Bring The Soul will be the band's third movie release, and is expected to include a mix of performances, interviews, and other never-before-seen footage. The film will also show BTS during the end of their Love Yourself tour, and when teasing details of the upcoming release Trafalgar Releasing's Marc Allenby revealed that the movie will be "an intimate opportunity to see the band following their landmark Love Yourself tour."

Bring The Soul: The Movie will arrive in cinemas just six months after the band's second movie release, Love Yourself in Seoul — and in addition to storming the box office, it was recently announced that BTS had broken a very impressive world record. According to Billboard, the K-Pop band's album Map of the Soul: Persona was confirmed by Guinness World Records as being the best-selling South Korean album of all time.

As of May 2019, BTS had sold 3,399,302 copies in their home country, and speaking to Billboard about this major achievement, a Guinness World Records spokesperson said, "The boy band’s seven-track EP, featuring the single "Boy with Luv," was released on 12 April 2019 and sold 3,229,032 copies in its first month. Persona topped charts around the world, including the U.S. Billboard 200 and the UK’s Official Albums Chart. The set debuted at No.1 on the Gaon Album Chart dated 13 April 2019, where it remained for three consecutive weeks."

As the Radio Times reports, the K-Pop superstars have been making serious waves in the UK over the past year, and even nabbed their first ever UK number one following the release of their EP, Map of the Soul: Persona. Earlier this year, the band also stopped by to perform at the live semi-finals of ITV's Britain's Got Talent, before headlining two sold-out shows at London's Wembley Stadium in early June. So, it seems BTS are showing no signs of slowing down, and I can't wait to see what their latest flick has to offer.

Bring The Soul: The Movie will be released in selected UK cinemas on Wednesday, August 7.

More like this
Snoop Dogg & Michelle Pfeiffer Lead Moving Tributes To Coolio
By El Hunt
A Familiar 'Sex Education' Star Just Got A Major Role In Fantasy Teen Drama 'Silver'
By El Hunt
At 28, Melanie C Was Falling In Love & Reclaiming Her Confidence
By Olivia-Anne Cleary
Girls Aloud Announce Primark Collab In Honour Of Sarah Harding
By Sophie McEvoy
Get The Very Best Of Bustle/UK