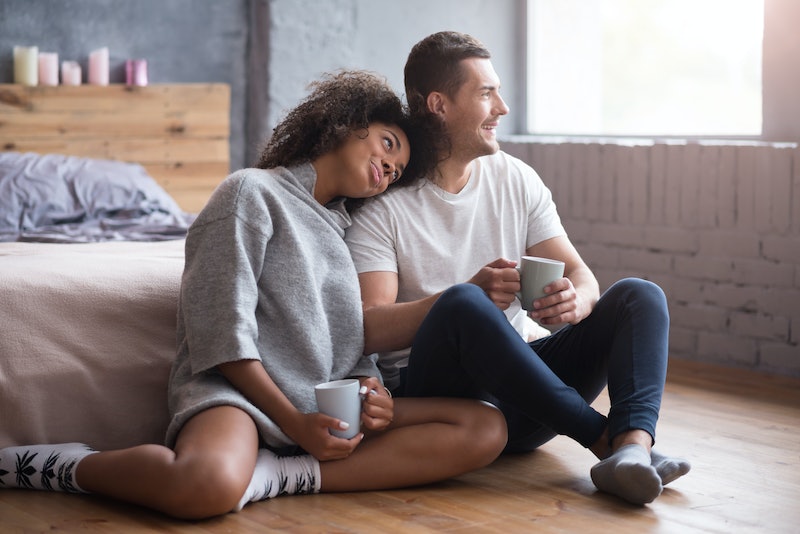 People seek guidance from the stars for pretty much every aspect of their life. But one of the most common questions astrologers get asked is, "When will I get married?" Whether you're single and looking or already in a serious relationship, there's a level of comfort in knowing that something is meant to happen in a given timeframe. While astrology is great for giving you insight about your personality and the types of people you'd be compatible with, can it really tell you when you're going to get married? According to astrologers, yes. But it's not as straightforward as you might think.

"As an astrologer people will ask me questions such as, when will I find love? when will I get married? and will I be happy?" Terry O'Connor, spiritual astrologer and advisor of The Astro Coach, tells Bustle. "These are all legitimate questions. Even though astrology can't guarantee these things, it can show us an increased likelihood of when things could happen."

Astrology works a little differently than your average psychic reading. In fact, astrologer Jennifer Lakshmi Dove, tells Bustle, "It's a science in itself."

First, an astrologer will ask for your birth date, time, and location, to create your natal chart. Then, they'll look at the current transiting planets to give you a picture of what's happening in the sky right now and how it may be affecting your life. For example, if Mercury is in retrograde and you suddenly start thinking about your ex, an astrologer may advise you to avoid going down that path until Mercury goes direct.

So astrology is useful if you're looking for explanations about why certain things are happening in the present and why they happened in the past. Many times, it can be really accurate.

When it comes to the future, "an astrologer would reluctantly make a prediction," Francesca Oddie, astrologer and author, tells Bustle. But they can use different methods of "progressing" someone's birth chart in order to see what's unraveling in the future. When it comes to finding love or getting married, these are just some of the things astrologers look at.

Transits And The Seventh House

Your birth chart contains information on where the Sun, Moon, Venus, and other planets were in the sky when you were born. In astrology, there are also 12 houses in your chart that rule certain areas of your life. As the planets move though each house, it can make certain things more challenging or luckier for you.

According to O'Connor, long-term partnerships, relationships, and marriage all fall under a person's seventh house. When Venus is moving or transiting through your seventh house, you may feel a little more affectionate and giving in your relationship.

But if you're looking for love, you should try to figure out when Jupiter transits your seventh house as it's the planet of luck and opportunity. "As Jupiter transits the seventh house, it brings blessings to any relationship or partnership that you are involved in," O'Connor says. "It would be a perfect time to renew your vows or commitment to someone special in your life. If you're not married, it will often indicate a marriage or commitment to someone."

An easier way to figure out a good time to find love and get married is to look for your Saturn Return. According to Dove, a Saturn Return occurs when the Saturn returns to the same place in the sky as it was on the day you were born. People generally have at least two of these in their lifetime.

"The first Saturn Return occurs between the ages of 27-29, and it's a great predictor for the timing of life commitments like marriage, having a child, and a home or apartment purchase," Dove says.

Your second Saturn Return usually happens between the ages of 58 and 59. It's a time when you'll look at your life and see if there are any major changes that need to be done. According to Dove, many see this time as a rebirth.

According to Dove, both your Saturn Return dates and Progressed Moon placements can be found by looking at your astrology chart on your own or with the support of a qualified astrologer.

It's important to note that not everyone has marriage foretold in their charts. As O'Connor says, "For some people, getting married might be a long and arduous process." But that doesn't mean it can't happen for you at all or that you won't have a lasting marriage. Chances are, people who really do want marriage want it because it's already part of their chart. The same goes for people who prefer to be single.

While astrology can tell you when certain things are more likely to happen, it really isn't made to predict the future. It's meant to be used as a tool to guide and empower you. So when the right time comes, you'll to take action and do what you need to do to make things happen in your life.