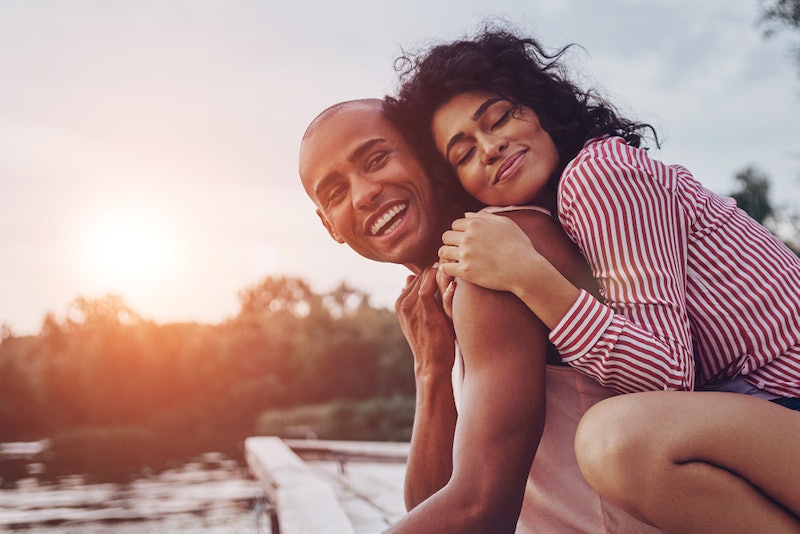 Ah... summertime, and the livin' is easy. Love and sunshine are in the air, and it makes all of us want to get out, be more social, and — if you're single — maybe put yourself out there in a dating scene a lil' harder to find yourself some summer love. But alas: Everyone's favorite (aka least favorite) astrological plot twist is coming up quick. That's right: Mercury retrograde kicks off Jul. 7, 2019 in the attention-loving sign of Leo, and will be dosing us up with its usual hijinks through Jul. 31, 2019, when it'll end up in sensitive Cancer territory. This means major scheduling issues, running late everywhere, tech meltdowns, typos galore, and more. Thanks a lot, universe!

When a planet retrogrades (which, in Mercury's case, happens three to four times a year), it appears to move backward in the sky for a period of time — during which it also pumps the breaks on the areas of our lives that the backspinning planet rules. In astrology, Mercury rules technology, communication, and travel, meaning that during one of it's retrograde periods, we'll all need to move a little slower and expect delays, errors, and snags in all of these realms.

So how does Mercury retrograde affect dating? Well, it definitely calls for some extra effort and awareness, that's for sure. Firstly, communication is a huge part of dating — so when we're constantly feeling unclear in our words and thinking, sending texts off too soon, or misinterpreting things, it can cause some serious friction dating-wise. Transportation and scheduling is another area that's important. Mercury makes it difficult to get anywhere on time, and tends to throw a wrench in things when it comes to scheduling — which can make nailing down dates (and getting yourself there on time) super difficult.

That said, no one expects you to delete your dating apps just because a big ol' retrograde planet is turning your life upside down. "Don't avoid dating because Mercury is retrograde," explains astrologer Lisa Stardust, who spoke with Bustle about this transit. "You still can meet someone and have a meaningful relationship with them." And if you're already in a committed situation, you're not screwed there, either: "Use this time to revise and reconcile issues with your partner," advises Stardust. "It’s a great time to change the dynamic between you both."

Here are some Mercury retrograde dating dos and don'ts to stick to that'll help ensure you indulge your need for summer love, sans the summertime sadness.

DO: Keep A Lid On The Dating Drama

Don’t get me wrong, I love drama, and am decidedly unchill when it comes to dating (or anything, really). But given this particular retrograde’s placement in drama-lovin' Leo, we want to be wary about potential blowups. Leo is a flashy, theatrical, and notably dramatic fire sign, so Mercury's backward journey through its territory is likely to make us all feel a little feistier and more over-the-top in our expressions. Consequently, it's not unlikely that you'll also feel a little more irritable and aggressive — and a little more inclined to throw a li'l fit over said irritations. But when it comes to your dating life, try to reel it in — cause while you may feel justified in the moment, you could end up feeling regret over stirring the pot so much.

"Don't create drama to get your crush’s attention; it will backfire," warns Stardust.

Conversely, be wary of other people's penchant for drama during this period, too — and don't be afraid to steer clear of any prospects who seem like they can't get a handle on their emotions during the retrograde.

Here’s the deal: When Mercury is backspinning, everything in our communication sector gets turned upside down. This means that the cuties you match with on your dating apps or the summer fling you’re spending your nights with is a lot less likely to be around for the long haul, even if things feel good right now. Any time we start something during a retrograde — including a romantic relationship — we're going to have a much harder time making the endeavor last. Because retrogrades are a time for reviewing and not beginning, we simply aren't seeing things with the clear-mindedness we'd usually view life through, and that can lead to some serious false hopes. So have your fun, but keep the reins on your heart a bit until the retrograde passes.

And, folks, this goes for breakups, too. If you've only just made the decision to end something during the retrograde, you might want to be aware that — once again — things you start during a retrograde don't have the lasting power that we might hope.

"Don't breakup with someone now," advises Stardust. "You may change your mind [once Mercury goes direct] and it may be too late."

DO: Use More Than Words To Express Yourself

Dating, in my case anyway, usually involves a lot of words: Lots of texting, long in-person conversations, you get the gist. After all, getting to know someone means communication and sharing. But during Mercury retrograde, there's going to be veil of confusion over our ability to communicate — meaning things could easily be misinterpreted, left out, or just come out totally wrong. That said, work on your non-verbal (or textual) communication when it comes to dating this summer. Physical touch can be a good way to bond, as can focusing on showing your appreciation for someone through actions rather than words.

DON'T: Get Too Uptight About Timing

As the ruler of transportation, Mercury can wreak havoc on our schedules and ability to get anywhere on time when it's in retrograde. That said, expect to have to do a little extra finagling in order to line up your schedule with that of your romantic prospect — and don't be shocked if you (or your date!) end up having to show up late or rain check altogether. Try to leave a little leeway in your tolerance level when it comes to timing and scheduling dates, and hope that your love interest will grant you the same consideration. If you do show up late and blow a reservation, you can always blame astrology.

DO: Be Wary Of Exes

Mercury retrograde periods are absolutely notorious for bringing our exes out of the woodwork, so look out for that “I miss you” text or a conveniently-timed (and overly flirty) Insta story reply. Now, this isn't to say that you need to steer clear of any past lovers at all costs — whether or not you want to dip back into a few pools of the past is up to you! But it'll behoove you to prepare yourself for a long lost love to come a-knockin' so they don't catch you off guard.

"Say hi to your exes if the urge strikes you, don’t avoid your past," advises Stardust. "[But] don't convince yourself that an ex who zombies you is the one. They may disappear when Mercury goes direct."

You might think that agreeing to go on an autumn trip with someone you met two weeks ago is a good idea during Mercury retrograde, but hold off on settling any major plans with a new fling. It's hard enough to think clearly or nail down solid plans with people you know well during Mercury Rx — so attempting to do so with someone you've just recently starting seeing? It's going to prove near impossible when it comes to actually panning out.

Save any major plans or promises until then — if you're even still interested in making them, at that point!

DO: Triple (Or Maybe Quadruple!) Check Before You Text

OK, dating in the modern age involves our tech devices. Like, heavily so. Whether it's swiping 'til your fingers fall off or texting all day long, our phones are basically as involved in our dating lives as we are — and this is no bueno when it comes to dating during a Mercury Rx. We are way more likely to accidentally swipe in the wrong direction — or worse, send off a text to the wrong person. Imagine gushing about your date to your best friend via text, only to find out moments later you actually sent the message to your date by mistake. That's some classic Mercury retrograde hijinks, so do your diligence to avoid embarrassment and make sure it doesn't happen to you.

DON'T: Get Oversensitive About The Small Stuff

Mercury is retrograding alllll the way back into the deeply emotional, sensitive, moody sign of Cancer. This means that on top of the communication issues we're likely to face, we're all going to be feeling pretty touchy and easily hurt about things, too. When it comes to dating, try to keep things in perspective if you find yourself feeling unusually sensitive about little things that might not normally set you off. And this has to work both ways: Make an effort to be extra thoughtful with your own words and actions when it comes to dating, as other people are likely to be feeling just as sensitive, and could easily get their feelings hurt or take something the wrong way.

If you do find yourself arguing over small things, take a step back and try to get some perspective. "Keep in mind that arguments had now can work themselves out, if both parties are willing to cooperate," explains Stardust. Be willing to check yourself — and date people who are self-aware enough to do the same.

DO: Take A Dating Break If You Need One — 'Cause A Mercury Rx Romance Isn't Easy

I'd never tell you not to date during a whole three and a half week chunk of summertime — there are some added challenges given the astrological situation, sure, but a little extra awareness can be a helpful thing, and there is still plenty of good that can come from dating during this transit. But that said, if you're feeling more inclined to go inward, reflect, and spend some time solo, don't be afraid to take a brief chill pill from the dating scene. Taking time for self-work is good, too — and Mercury retrograde is a wonderful time for it.