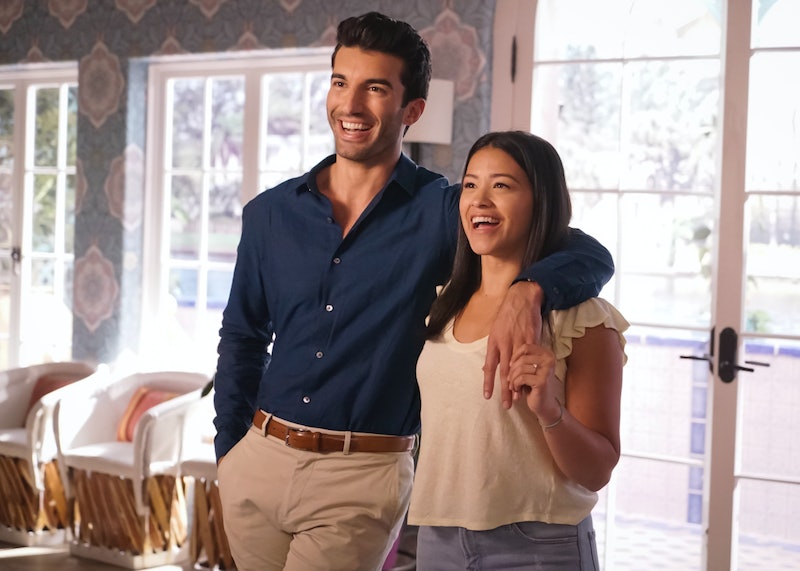 After five seasons of shocking twists and emotional turns, The CW's hit telenovela series Jane the Virgin is coming to an end this week. Audiences without a cable subscription — which, let's be real, is most of us now — are probably wondering when they'll get to see the final season on a streaming platform. Fans will be able to watch Jane the Virgin Season 5 on Netflix, and those eager to see how Jane's final chapter closes out will not have to wait long.

The final episode of Jane the Virgin is set to air on Wednesday, Jul. 31. The CW has typically always put their shows up on Netflix eight days after the last episode airs. That means, as long as the CW follows their usual pattern, that Jane the Virgin Season 5 will hit Netflix on Thursday, Aug. 8 in the United States. According to RadioTimes, UK fans will get it even faster, with Jane the Virgin arriving on UK Netflix just 24 hours after it airs on The CW in America. Now's the time to mute all spoilers!

When it comes to what to expect in the final season, creator and showrunner Jennie Snyder Urman told Variety‘s “TV Take” podcast that the focus is on giving all the Villaneuva women their happily ever afters.

“These three women lived within a few blocks of each other and are always there, sitting on the porch swing, and they’re moving into the next phase of their lives,” Urman said on the podcast, referencing Jane, her mother Xo, and her grandma Alba. “It’s about this family that was created, which is kind of like the family that’s created between the people that are making the show and the people that are watching the show and that shared experience, too. It’s all about honoring this big, unruly family that we all created and then saying goodbye to them.”

It will be tough to say goodbye to the world of Jane the Virgin, but both Urman and Jane's actor Gina Rodriguez are excited about their next projects. Urman is already working on a show starring Rogelio's actor Jaime Camil, and Rodriguez has been cast in Diary of a Female President and Carmen Sandiego.

And of course fans won't have to totally let go of Jane: there's still the upcoming anthology series, Jane the Novela, which will be a series of tales that Jane herself is writing. Rodriguez is returning to executive produce, as well as lend her voice as the narrator.

"It’s pretty much like the story Jane has been writing all along. We’ve seen her writing, but we’ve never really seen the kind of writing she does," Rodriguez told Vanity Fair about the spin-off series. "It’s her imagination, her beautiful story that she comes up with. I’m really excited that we found [lead actress] Jacqueline [Grace Lopez] and we get to make another Latina’s career and dreams come true, and just to continue to put out really cool, positive role models."

Jane the Virgin made waves as one of the longest running American romcom shows to focus entirely on three generations of Latina women. The way it normalized diversity and talked about important issues all while making our hearts flutter has left an indelible mark on the genre. Now that it's ending, it sounds like we can only expect more diverse and exciting projects out of Urman and Rodriguez.

More like this
The First Clip From Netflix’s Queen Charlotte ‘Bridgerton’ Prequel
By Bustle Editors
What’s New On Netflix: Ana De Armas’ 'Blonde' & A Nick Kroll Special
By Arya Roshanian
What’s New On Netflix: Meet 'The Real Bling Ring'
By Arya Roshanian
Mike Flanagan Teases 'The Midnight Club' In This Exclusive, Creepy Clip
By Grace Wehniainen
Get Even More From Bustle — Sign Up For The Newsletter