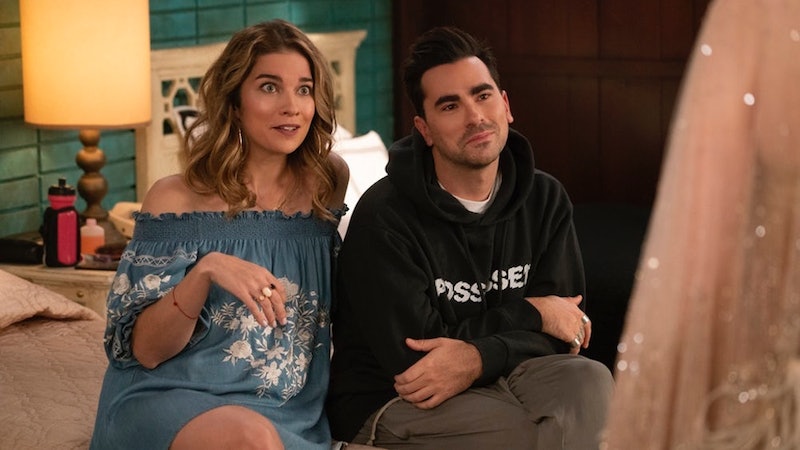 There are a lot of amazing shows that will be honored during the 2019 MTV Movie & TV Awards, but it's impossible to deny how much Pop TV sitcom Schitt's Creek in particular deserves a win. The series has been nominted in two categories for Best Show and Best Comedic Performance by Dan Levy as series creator and titular character David Rose. But for those who aren't currently up to date on the show, you may be wondering whether or not Schitt's Creek Season 5 will be on Netflix, so that you can catch up with the Rose family until your heart's content.

Update: According to a tweet from See What's Next which was retweeted by the official Netflix Twitter account, Schitt's Creek Season 5 will hit the streaming service on Oct. 10.

Earlier: As of now, it's unclear when exactly the series, which centers around the Rose family as they attempt to figure their riches to rag life out in the small town of Schitt's Creek, will debut their fifth season on Netflix. But given that the first four seasons are currently available for your streaming pleasure, it's only a matter of time before the latest season makes its way to the streaming platform.

Season 4 debuted roughly six months after it aired on Pop TV, so odds are you can expect Season 5 to make its debut sometime in October of this year. But again, that's mere speculation and has yet to be confirmed by the series or Netflix at this time. The season consisted of 14 episodes instead of its typical 13 episode lineup and was even picked up for a sixth season this past March. Unfortunately, however, the good news came with a price. The series' creators also revealed that Season 6 of Schitt's Creek would be its last.

Levy announced the news on both Instagram and Twitter with a sweet message to fans from both himself and his fellow co-creator and real life father Eugene Levy. “We are very excited to announce that ‘Schitt’s Creek’ is coming back for a sixth season on CBC and Pop in 2020," the message stated. “We also wanted to take this opportunity to let you know that we have decided Season 6 will be our last." They added:

"We are so grateful to have been given the time and creative freedom to tell this story in its totality, concluding with a final chapter that we had envisioned from the very beginning. It’s not lost on us what a rare privilege it is in this industry to get to decide when your show should take its final bow. We could never have dreamed that our fans would grow to love and care about these characters in the ways that you have.”

Obviously, this came as bittersweet news to fans. On the one side, they were thrilled to learn that the series had been picked up for another season. But by the same token, they're also completely devastated by the fact that the series is coming to an end. Ever since its availability on Netflix, the show has become more popular than ever, allowing those without cable the chance to see the raw talent and stomach-churning wit this series has produced throughout the last several seasons.

No one wants to see something as wonderful as this come to a close, but if it has to happen, let's hope that the MTV Movie & TV Awards give it the send-off it deserves. And the sooner Season 5 shows up on Netflix, the better.

This article was originally published on June 17, 2019