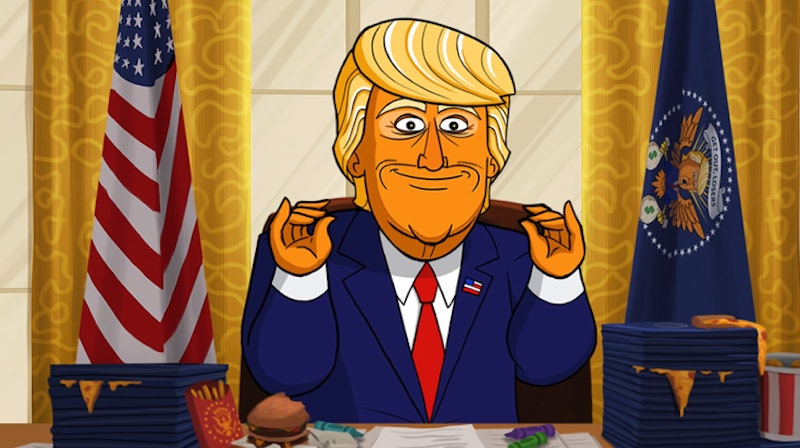 On several occasions, Stephen Colbert has "interviewed" an animated version of Donald Trump on his late-night show. Now, according to Variety, Colbert is creating an entire Trump cartoon show for Showtime. The new series will be based on the animated version of the president that appears on The Late Show with Stephen Colbert, and it's scheduled to run for 10 episodes this fall.

When cartoon Trump appears on Colbert's show, it's usually for an interview. But according to Showtime, this new series will be a documentary-style comedy that follows Trump and his family's day-to-day lives in the White House.

In a press release, Showtime promised that the show would "present the truish adventures of Trump’s confidants and bon vivants — family, top associates, heads of government, golf pros and anyone else straying into his orbit — intrepidly exploring their histories and their psyches, revealing insights into what makes them so definitively Trumpian."

"It’s a workplace comedy where the office happens to be oval," Showtime said. "It’s a character study in search of character, as seen through the eyes of an imaginary documentary crew."

The show will be produced by Colbert, Late Show showrunner Chris Licht and Tim Luecke, who co-created the animated version of Trump that's being used for the show. It will air this fall.

"I know a lot of people wanted to do this, and I'm honored that the Cartoon President invited our documentary crew into his private world," Colbert himself said facetiously in a statement. "I've seen some of the footage, and I look forward to sharing the man behind the MAGA."

Although the concept may seem novel, this won't be the first time a sitting American president will be the subject of a satirical television cartoon series. In 2007, Comedy Central aired Lil' Bush, an animated show that depicted the (fictional) adventures of President George W. Bush, his cabinet members, and his family members as children. It ran for 17 episodes but wasn't renewed for a third season in 2008, presumably because Bush's presidency was nearing its end.

The Showtime series, which is currently untitled, will be the second of two Trump-themed television shows. Comedy Central is currently airing The President Show, a live-action series that features Anthony Atamanuik as the president.

According to Variety, Colbert and his team are attempting to producer and complete the show quickly, so that its writing remains up-to-date with current events.