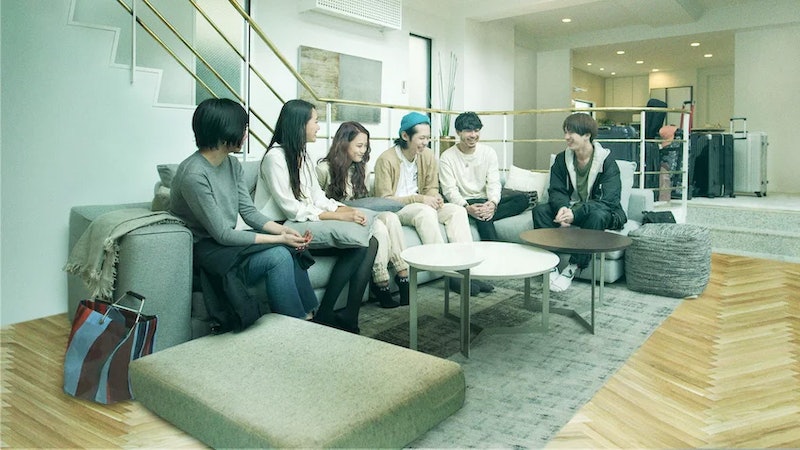 Sometimes you have to branch out of your regular routines and this is especially true with reality TV. Which is probably why so many international reality shows have captivated American viewers. One of the most compelling ones out there is Terrace House, a very popular Japanese reality show, in which a group of people share a house and ...mostly get along with each other. The latest series, Terrace House: Tokyo is out now, but, unfortunately for those of you who just can’t wait for more, there’s no word on when Terrace House: Tokyo Part 2 will land on Netflix.

If you can't wait that long, the Japan Times also has reacts of each episode on its website, in case you want to be spoiled by the goings-on in that big, beautiful Tokyo house. But if not, unfortunately, you’ll just have to wait a little longer.

Terrace House is notable namely for what it isn’t — salacious, loud, or cruel. It’s just a bunch of young Japanese people living together. They’re pretty polite, and though feelings can catch and disagreements can happen, it’s always fairly calm. It’s pretty relaxing. It’s the Great British Baking Show of situational reality shows. They keep their jobs, they keep their lives… and that’s it. No challenges, no forced interactions, just life. And at this point, life is pretty interesting. According to the show’s official description from Netflix, “Six strangers share a fabulous house in Tokyo, looking for love while living under the same roof. With no script, what happens next is all up to them.”

So why is Terrace House so popular? The format is recognizable, but there's something about it that really resonates with viewers. It's not everyone's cup of tea to watch a subtitled reality show, but the houseguests's ability to live their own lives coupled with their ability to come and go as they please — and leave, making room for new houseguests — means that the show is both calming and never boring. (It also makes it easy to catch up with, because there's never much to miss.)

And who doesn't love the commentators, chatting about everything the houseguests are doing? Why don't American reality shows have more in-the-minute commentators? They're there for color commentary, but they're also there to keep viewers up to speed, again, making it easy to miss a few episodes of Terrace House and still feel like you're part of the action. For now, Terrace House: Tokyo fans should soak up every bit of Part 1, because it won't be long until the rest of the series is on Netflix.

More like this
What's New On Netflix: A Third '365 Days' Movie & Lili Reinhart’s New Film
By Arya Roshanian
What’s New On Netflix: 'Never Have I Ever' & 'Indian Matchmaking' Return
By Arya Roshanian
Everything To Know About The HBO Max & Discovery+ Streaming Service Merger
By Brad Witter
Everything Jarrette & Iyanna Have Been Up To Since 'Love Is Blind'
By Brad Witter
Get Even More From Bustle — Sign Up For The Newsletter