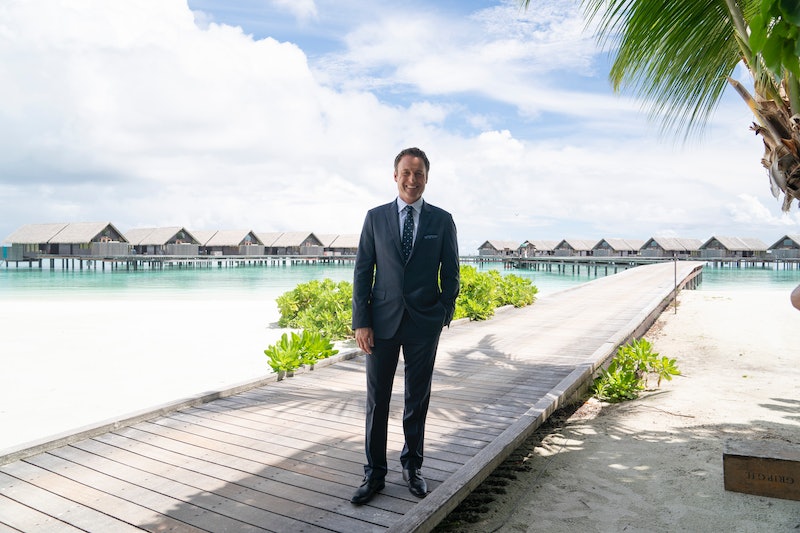 Decisions, decisions — once Becca's final The Bachelorette episode airs and her choice is revealed to Bachelor Nation, another big decision awaits fans. Who will succeed Becca and become the franchise's next leading man? Almost more important, when will the 2019 Bachelor be announced? Hopefully sooner rather than later, white smoke will rise from Chris Harrison's lair.

Fortunately for fans of the ABC franchise, this show doesn't tend to fix what ain't broke when it comes to scheduling. Based on the previous five seasons, new Bachelor "journeys" typically begin filming in late September. As August has now arrived, the clock is ticking and the announcement is imminent. New Bachelor announcements are usually made at the beginning of September or the end of August, giving prospective contestants plenty of time to apply and take that leap of romantic faith.

Where will Harrison announce his latest victim, err, contender? That's more of a mystery. The venue that ABC chooses to deliver this information changes every year. For all we know, the announcement could come on a surprise Facebook or Instagram post this time around. Here's where (and when, for good measure) the last couple of announcements were made:

Prior to those five, Sean Lowe was announced via official ABC press release on September 25, 2012, just as the season was set to begin filming. So really, anything could happen — though it kind of seems time to do a good ol' fashioned Bachelorette finale reveal, don't you think? Don't make us wait for a random episode of After Paradise or get up early for Good Morning America. To borrow some infamous words from Becca herself, why not just do the damn thing?!

Who will the Bachelor be, once the announcement is made? Jason, Wills, and even Grocery Joe from Becca's season all have strong fan contingents online. Jason is publicly "open" to being the next Bachelor as well, so we'll see about that. Colton and Joe are headed to Bachelor In Paradise, and while Colton is presumably going to try and make things work with Tia, neither are out of the running. While Blake (though not... Garrett... even if Becca ends up... with Blake) would be excellent, do we really need two runners-up in a row? Technically, Becca should still count as a winner, not a runner-up, but whatever — it's fine. It's fine!

Maybe The Bachelor will dig deeper into the archives for the next love seeker. Then again, as we know, Arie didn't exactly turn out as expected, so maybe it's best to stick to the most recent past. What we do know is that the announcement should come any week now. Hopefully.