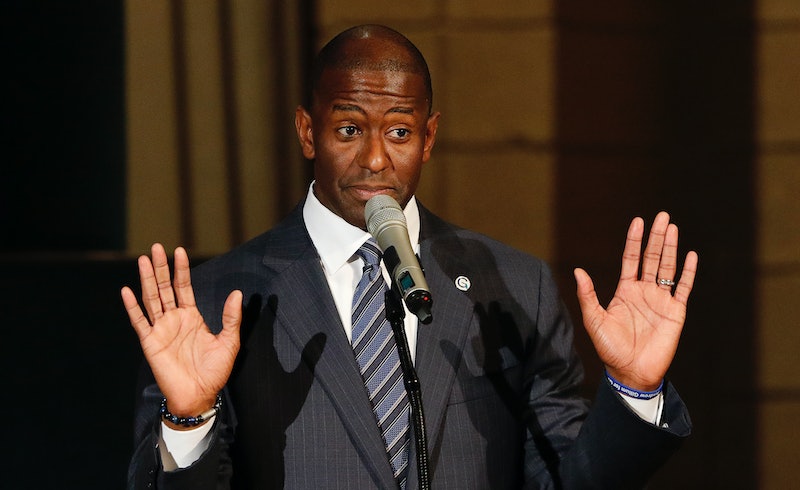 More than a week after Election Day, three races in Florida are without a winner. Democrats like Tallahassee Mayor Andrew Gillum (running for governor) and Sen. Bill Nelson (running for reelection) have been pushing for patience and counting every vote. Republicans, in turn, have tried to use the courts to hurry things up — even making accusations of fraud, albeit without evidence. There's no telling exactly when Florida's final recount results will come in, but there are some deadlines coming up quickly for the machine recount.

The recount in Florida was triggered because three of the races in the state had results within a margin 0.5 percent. In addition to the U.S. Senate and governor races — currently both led by Republicans Rick Scott and Ron DeSantis respectively — is the race for state agriculture commissioner, which sees Republican Matt Caldwell and Democrat Nikki Fried facing off.

These machine recounts began on Saturday, and by Florida law, they must be completed by Thursday at 3 p.m. But, some counties are running behind and might need an extension. Lawyers for Nelson have gone to U.S. District Court in Tallahassee to request just that for the Senate race, and it's something the judge hinted he didn't have a problem with (a decision would likely come on Thursday).

That, believe it or not, is the short answer. Because if after the machine recount a race is within a 0.25 percent margin, it goes to a hand recount. And that can take much, much longer. To get an idea, you can reminisce of the year 2000 when the recount between Al Gore and George W. Bush in the race for president took until December and was only stopped by the U.S. Supreme Court.

Some of the most controversial aspects of the hand recount could be dimpled ballots and hanging chads. Dimpled ballots, a big source of debate in 2000, were where voting machines didn't punch through the paper to mark the vote and thus couldn't be counted by a machine. Another variation that wasn't machine readable was a hanging chad. That was when only part of the paper was punched out by the voting machine.

This time, Republicans haven't even waited until the hand recount to start their legal and P.R. arguments — and not just in Florida; D.C. Republicans and the president have weighed in too.

"When will Bill Nelson concede in Florida?" Trump tweeted on Tuesday. "The characters running Broward and Palm Beach voting will not be able to ‘find’ enough votes, too much spotlight on them now!"

That led Sen. Chuck Schumer to respond on Nelson's behalf. "It’s just plain wrong," Schumer told reporters in D.C. Tuesday. "It’s un-American. Attempts to bully, threaten and cajole officials into not counting every vote is a large and dangerous step away from the democracy we all cherish. Trump and Scott must stop now."

There's a fair chance the governor's race could be decided with the machine recount (on Saturday the margin was .41 percent), but for the state agriculture commissioner and — most importantly for the rest of the country — the U.S. Senate seat, the preliminary numbers already put them within the margin for a hand recount.