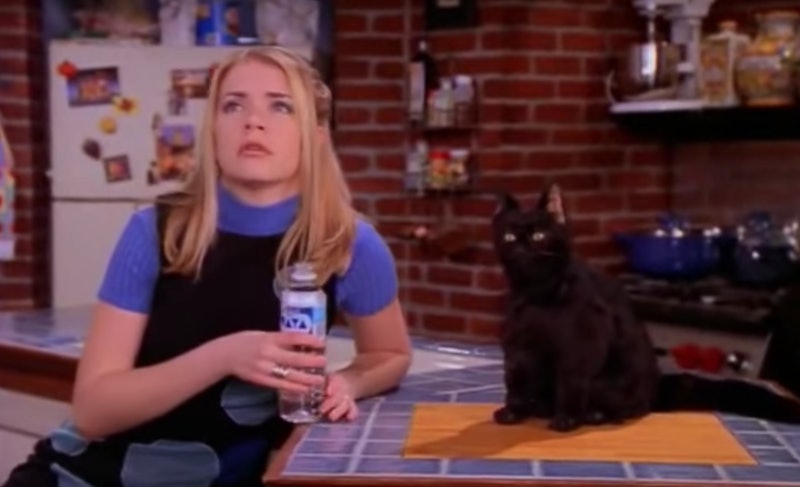 Things are about to get a little witchier on a certain streaming service. Netflix has scooped up the Sabrina reboot based on Archie Comics graphic novel The Chilling Adventures of Sabrina, The Hollywood Reporter reported on Friday. And it’s a big order, too: The streaming service has nabbed a two-season, 20-episode serving of the series. Originally developed at the CW, the new Sabrina show has moved to Netflix where viewers can marathon all of the episodes at once. So, when will the Sabrina reboot be on Netflix? The release date has yet to be announced, but according to THR's sources, the two seasons of the Riverdale spinoff will reportedly "shoot back-to-back with the first batch filming from February to June, and second from June to October."

News of a Sabrina reboot first surfaced back in September, and the details were spellbinding, to say the least. As Vulture reported, the CW said the new Sabrina program "reimagines the origin and adventures of Sabrina the Teenage Witch as a dark coming-of-age story that traffics in horror, the occult and, of course, witchcraft."

"Tonally in the vein of Rosemary’s Baby and The Exorcist, this adaptation finds Sabrina wrestling to reconcile her dual nature — half-witch, half-mortal — while standing against the evil forces that threaten her, her family and the daylight world humans inhabit."

So uh, maybe don't expect a laugh track à la beloved sitcom Sabrina the Teenage Witch. Written by Riverdale showrunner and Archie Comics CCO Roberto Aguirre-Sacasa, the to-be-released Sabrina show isn't going to be a lighthearted romp about a high school student who happens to have magical powers. Like Riverdale, this show's going to err on the side of spooky.

Aguirre-Sacasa will executive produce the Sabrina offshoot with Riverdale's Greg Berlanti, Sarah Schechter, Lee Toland Krieger, and Archie Comics CEO Jon Goldwater. According to THR, the list the CW compiled a list of possible actors for the lead back in September, but that's "being revisited" after the switch to Netflix.

Aguirre-Sacasa's The Chilling Adventures of Sabrina series is part of Archie Horror, Archie Comics' horror imprint that also includes the series Afterlife with Archie. And like the Netflix show, this graphic novel promises an eerie supernatural adventure. The Archie Comics site provides the following summary:

"On the eve of her sixteenth birthday, the young sorceress Sabrina Spellman finds herself at a crossroads, having to choose between an unearthly destiny and her mortal boyfriend, Harvey. But a foe from her family’s past has arrived in Greendale, Madame Satan, and she has her own deadly agenda."

There's an unearthly destiny? And a deadly agenda? And someone named Madame Satan? All of this sounds incredible.

Now an important question: What about Sabrina the Teenage Witch favorite Salem Saberhagen? Netflix hasn't offered up a straightforward answer about whether or not the feline with the gift of gab will be on the reboot, the streaming service did tweet, "Don't @ me about talking cats (yet)."

Again, nothing's confirmed, but it is worth noting that there is a cat named Salem in The Chilling Adventures of Sabrina. And yes, he can speak. He may not be as delightfully snarky as the Salem from Sabrina the Teenage Witch, but a talking cat is a talking cat. And a talking cat is not something to take for granted.

The premiere date is still up in the air, but here's one thing that's beyond certain: This show sounds about as divine as stack of pancakes. Cannot wait to see this Riverdale spinoff on the ol' tube.