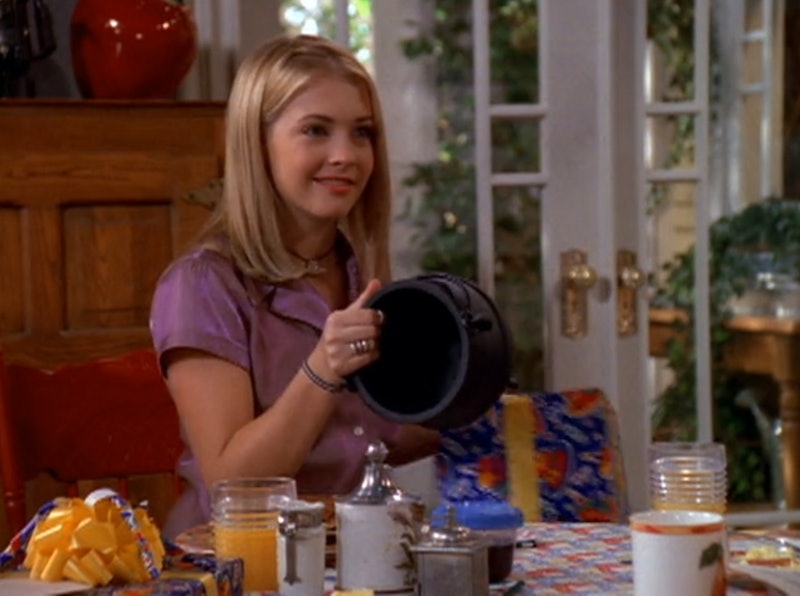 Big news, Riverdale fans, your favorite teenage witch has found a new home. According to The Hollywood Reporter, the Riverdale spin-off Sabrina is heading to Netflix and reportedly received a two-season order for a total of 20 episodes. The Sabrina series will be based on The Chilling Adventures of Sabrina comics, which means the show will be darker than the beloved '90s Sabrina the Teenage Witch sitcom that starred Melissa Joan Hart.

The two-season pickup could be a big deal for Netflix, given how many viewers caught up on Riverdale when its first season arrived on the streaming service over the summer. It's believed that Riverdale Season 2's 60 percent growth in viewership is thanks in part to Season 1's availability on the streaming service. Now Netflix has its own branch of the Riverdale universe that it can deliver directly to viewers eager to reconnect with the iconic Sabrina Spellman.

Now that Sabrina has found a home, the big question is who will take on the role? The CW reportedly had a list of actors in mind, but now that the show is in Netflix's hands, the streaming giant could go in an entirely different direction. According to THR, filming for Season 1 could be underway as soon as February, so news about who will be playing this generation's Sabrina should be coming soon.

One thing viewers can count on is the new Sabrina being much darker in tone than its predecessor. If Riverdale is a teenage noir, then Sabrina will be a horror-flavored coming-of age-tale. In The CW's initial press release, both Rosemary's Baby and The Exorcist were cited as inspirations for the storytelling. Without the restraints of broadcast TV, Netflix can run wild with the scares, so you might as well prepare yourself for a series that could lead to a few sleepless nights.

Despite the change in location, it sounds like Riverdale showrunner Roberto Aguirre-Sacasa will still be in charge. The series' executive producer penned the pilot, and he hinted earlier this year that Sabrina's comic book boyfriend Harvey would be a part of the show. That should come as a relief for anyone who came of age in the '90s shipping Harvey and Sabrina. At this point, it's unclear how much of a connection Sabrina and Riverdale will share, though.

Greendale, where Sabrina lives, is supposed to be on the other side of Sweetwater River. Riverdale fans will recall that Greendale is where Jason Blossom was heading in Season 1. Since it's been established that the two towns are side by side, a crossover still seems inevitable, despite Sabrina being a Netflix show.

Riverdale devotees should brace themselves, because more shows set within the Archie universe could be coming — especially if Sabrina does well for Netflix. In a January interview with THR, Aguirre-Sacasa explained how the Archie comics could become a new franchise for The CW in the vein of the network's ever-growing catalog of superhero shows. Aguirre-Sacasa said:

One of the nice things about me being a part of Archie Comics is having access to a library of 4,000-5,000 characters. Sabrina the Teenage Witch, Josie and the Pussycats… those are characters who can very easily support their own show.

Sabrina could be the first step in making the Archie universe a reality, but there's also no doubt that this is a series that can stand on its own. While Riverdale initially seemed like a hard sell given how long it's been since Archie was in the spotlight, Sabrina was a TV staple throughout the '90s. Seeing her return in a new show with a darker edge could appeal to both Riverdale fans and anyone who loves the '90s show (or the comics).

All that's left now is to wait for the Sabrina casting news to come rolling in, and hope that Aguirre-Sacasa includes Salem in the show. Get ready world, because Sabrina Spellman is officially on her way back to the mortal realm.

More like this
The 'Kenan & Kel' Reunion On 'SNL' Took A Dramatic Turn, Thanks To Keke Palmer
By Brad Witter
The First Trailer For 'That '90s Show' Includes So Many Nods To The Original Series
By Jack Irvin, Alyssa Lapid and Grace Wehniainen
The 'Ugly Betty' Cast Just Reunited In The Best Way
By Sam Ramsden
How The Thanksgiving Episode Of 'Gossip Girl' Changed Pop Culture History
By Gabrielle Bondi
Get Even More From Bustle — Sign Up For The Newsletter