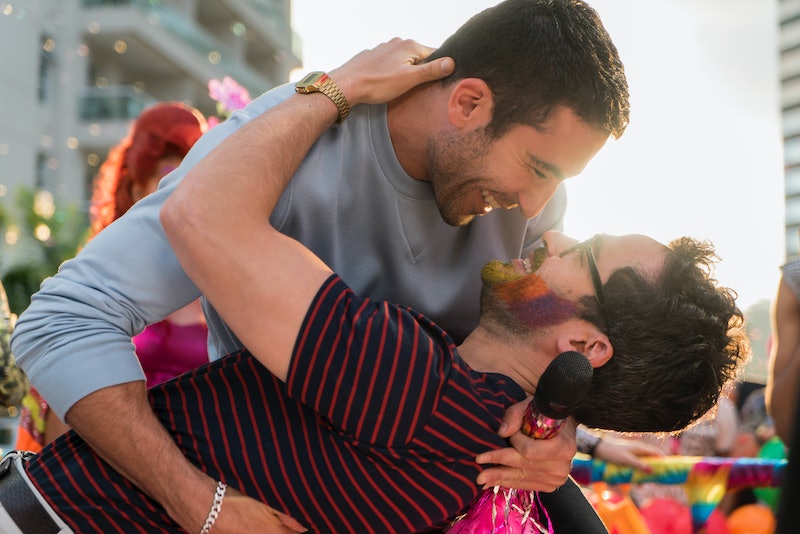 In early June, Netflix execs made the disappointing decision to cancel the Wachowskis' Sense8, the sci-fi show from the Matrix creators that was the most thrillingly queer, diverse, and life-affirming series on television. And while those execs weren't exactly quick in rectifying what felt like a big mistake… well, at least they rectified it, finally announcing on Thursday that Sense8 will return with a two-hour special to wrap up all the dangling plot threads left behind by the very cliffhanger-y Season 2 finale. But how long will fans have to wait for that resolution? Specifically, when will the Sense8 special air?

UPDATE: In April, Netflix announced that the Sense8 special will drop on June 8.

EARLIER: It would be understandable if Netflix wasn't ready to give fans closure anytime soon. After all, reviving Sense8 appears to be somewhat of a last-minute decision. The instant the show was canceled, fans started protesting and launching campaigns to get the streaming service to reverse its decision; but over the past four weeks, every indication has been that Netflix would stick to its guns.

One week after the cancellation, the company put out a statement on Facebook saying, "We've seen the petitions, we've read the messages" and "we've thought long and hard here at Netflix to try to make it work, but unfortunately we can't." That same day, cast member Brian J. Smith published a letter thanking fans for their support, but also reaffirming Netflix's decision and urging fans to consider the show an "unfinished symphony."

Furthermore, Sense8 fans aren't exactly strangers to having to wait a long time for more of their favorite show. Although Season 1 debuted way back in June 2015, Season 2 wouldn't find its way onto Netflix until May 2017 — almost two full years later. The only thing fans had to tide themselves over was a two-hour Christmas special, which premiered in December 2016 as a prologue of sorts for the sophomore season.

But neither the seemingly abrupt nature of Netflix's decision, nor the past history of the show, will prevent the Wachowskis from getting the revival special to their fans as soon as possible. According to the letter that Lana Wachowski posted on Facebook announcing the show's return, viewers can expect to receive the special sometime "next year," which means that they longest they'll have to wait is a relatively brief 18 months — and at the shortest, a mere six months. (The truth is likely somewhere in between.)

Naturally, it won't take as long to film a two-hour movie as it does to film an entire 12-episode season, so perhaps news that the revival will be arriving in 2018 shouldn't be a surprise. But to go so abruptly from "never getting more Sense8 ever again" to "getting more Sense8 next year" is bound to give fans a bit of whiplash.

Speaking of the fans, Lana wants them to know that the show's revival is entirely due to their support. "Improbably, unforeseeably, your love has brought Sense8 back to life," she writes. "(I could kiss every single one of you!)"

And while the special will wrap up the unresolved mysteries of Season 2's finale (like "what happened to Wolfgang"), the show's creator won't even go so far as to call it the "end" of the series, forever and ever. "After that…" she teases, "if this experience has taught me anything, you never know."

Regardless of whether the upcoming special is the show's grand finale — or a bridge to another full-fledged season — Sense8 fans have already received more than they could've hoped for just a few weeks ago. And for a show that's all about love, it's appropriate that it's the fans' passionate love for the series and its characters that saved the day.