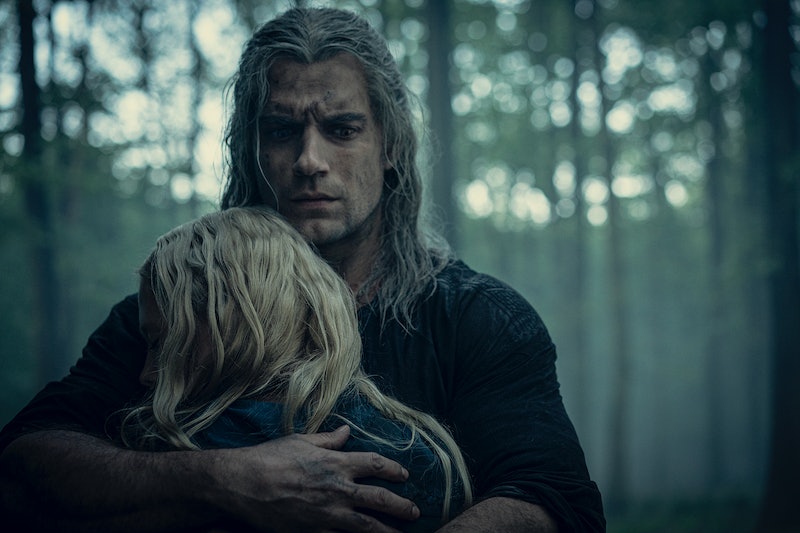 So you've finished every episode of The Witcher on Netflix and now you're thirsty for more grimdark fantasy action? Not to worry, because I've got 15 fantasy books to read once you've finished marathoning The Witcher, so you can keep the monster-slaying, potion-drinking fun going.

For those of you who haven't finished enjoying The Witcher on Netflix yet, here's a quick primer to the series. The new TV show is based on Polish author Andrzej Sapkowski's series of books and short stories, which were published between 1993 and 2013. The books have become hot commodities in the wake of Netflix's adaptation, with Witcher titles shipping out on weeks-long delays, even on Amazon, at the time of this writing. Although Sapkowski's The Last Wish is my first reading recommendation for fans of the new show, you should definitely seize the opportunity to explore the other fantasy books on this list if you're confronting long shipping times.

The Witcher novels and story collections served as inspiration for a series of three video games published between 2007 and 2015, in addition to tabletop role-playing games and board games. All of this media centers on Geralt of Rivia, the titular Witcher. In Sapkowski's created world, Witchers are mercenary monster-slayers who have undergone extensive mutations and training in order to do their jobs. They are resistant to a number of poisons, which they use to create potions that enhance their performance in battle.

Fans of The Witcher, in all media types, come to the series for its grimdark themes and aesthetics, Geralt's monster-hunting adventures, and the lore of The Continent. For your reading pleasure, I've picked out 15 fantasy books to read once you've finished marathoning The Witcher. Check out my recommendations below and share your favorites with me on Twitter!

The Last Wish by Andrzej Sapkowski

If you haven't read Andrzej Sapkowski's Witcher book series yet, that collection of novels and short stories should be your first stop after marathoning Netflix's The Witcher. Set before the events of the first novel in the series, The Last Wish contains a number of short stories that introduce readers to Geralt of Rivia and set up the world of The Continent. Those stories are also, conveniently, the narrative fodder for the first season of The Witcher on Netflix, so you won't find yourself in completely unfamiliar territory here.

The Fifth Season by N.K. Jemisin

For viewers who found themselves wondering why the humans in Geralt's world would treat him so poorly when he, y'know, slays monsters for them, there's N.K. Jemisin's The Fifth Season. The beginning of a Hugo Award-winning trilogy, The Fifth Season centers on three women — Damaya, Syenite, and Essun — who have the innate ability to control seismic activity. Living on a continent that is frequently plagued by massive earthquakes, their abilities should make them revered, right? Wrong. In their homeland of The Stillness, people like them, known as orogenes, are fated to be enslaved by the ruling government, if they aren't murdered first.

The hero of several of author Robin Hobb's fantasy series, the master assassin FitzChivalry Farseer has settled down into a calm, if monotonous, life in the 10 years preceding Fool's Assassin. As a reward for his service to the kingdom, Fitz has been allowed to retire in comfort as "Tom Badgerlock," but the arrival of a messenger soon changes everything. With his daughter's life at stake, Fitz finds himself dragged back into his old life, which he thought he'd left far behind.

The Broken Crown by Michelle West

The first book in Michelle West's Sun Sword series, The Broken Crown centers on Diora and Serra Teresa — a young girl and her aunt — living in the hyper-masculine, warlord-controlled nation known as the Dominion. Clan Leonne was given the divine right to rule over the Dominion when it obtained the Sun Sword, but now two usurpers have claimed the seat of power for themselves. As Diora struggles to adjust to her position in her new husband's harem, the upset in the Dominion may be the least of her worries, because a new war, greater than any her world has seen, is brewing on the horizon.

The Mirror Empire by Kameron Hurley

Two parallel worlds have drifted closer together and further apart for millennia, but the rise of a long-awaited star in one world may have disastrous consequences for the other. Raisa's three nations — Siduad, Dhai, and Dorinah — find themselves invaded by conquerors from a dying world in this portal-fantasy novel from The Light Brigade author Kameron Hurley. The key to saving Raisa may lie with Lilia, a girl from the other side of the mirror, who has the rare ability to draw power from that new star in the sky.

The Poppy War by R.F. Kuang

Rin is the last person anyone expected to gain entrance to one of the Empire's most elite military academies. She's just a poor orphan from a southern province, after all. At Sinegard, those things set her apart and make her the object of ridicule among her classmates. Ostracized from the rest of her cohort, Rin discovers a knack for shamanism — an ancient craft that may prove all too necessary in a world that, unbeknownst to most, is on the brink of a massive war.

When his brother unleashes literal hell on their hometown, the mage Darien feels duty-bound to undo what has been done. But fixing the problem may mean breaking every oath Darien has ever made as a mage, and may even require him to sacrifice his own humanity in the process.

With a setting totally unlike The Continent, David Mogo, Godhunter may seem out of place on this list, but trust me when I say that this Nigerian urban fantasy novel is just what fans of The Witcher will crave. Set in contemporary Lagos, Suyi Davies Okungbowa's novel centers on the eponymous demigod as he makes ends meet by doing what he does best — hunting down the various deities that have rained down on the city. But when one of David's hunts accidentally aids a major villain, he must move out of the shadows and work with a team to save Lagos from the forces of evil.

Long ago, humans colonized the distant planet of Erna — a land full of magical fae that bring a person's worst nightmares to life in front of them. In the last 1,200 years, sorcerers have learned how to harness the fae's power for themselves, but have accidentally fueled a much greater force of evil in the process. A horde of memory-devouring dark fae descend upon the humans of Erna, feasting on individuals' knowledge of magic, and leaving four people to save the world, or die trying.

If the idea of how Witchers are made fascinates you, you need to read Fledgling by Octavia E. Butler. In this novel, an amnesiac named Shori, who appears to be a young girl, wakes up injured in a cave. She finds help from a passerby, Wright, on whose blood she begins to feed. As Shori grows stronger, she begins to learn more about herself and her past, including the history of experimentation among her people, which led to her much-different appearance.

The Court of Broken Knives by Anna Smith Spark

As the Empire crumbles around them, one nobleman hatches a plan to assassinate the Emperor and his closest allies in order to seize power for himself. To carry out his fiendish plot, Lord Orhan Emmereth hires a group of assassins, which includes the small and skittish Marith — a boy whose destiny lies somewhere within the walls of the Emperor's stronghold. Joined by a priestess fleeing her own grisly fate, the mercenary killers march into the depths of uncertainty as they attempt to bring about a new world order.

The Trail of Lightning by Rebecca Roanhorse

Another urban fantasy novel, Rebecca Roanhorse's Trail of Lightning takes place on a former Navajo reservation following a climate crisis. In a brave new world where the monsters and heroes of Dinétah lore walk the earth, Maggie has the innate abilities needed to bring monsters to heel. Working as a monster hunter alongside a medicine man named Kai, Maggie takes on the task of finding a missing girl. What she discovers along the way uncovers a deep and deadly truth about the girl's fate and those of others who have gone missing, as well as the identity of a monster more powerful than any she has faced before.

The first book in Rebecca Levene's Hollow Gods series, Smiler's Fair takes place in a world where even the sun and moon are embroiled in a deadly battle. Following five main characters — an alcoholic fighter seeking vengeance, an orphaned noblewoman caught in a loveless marriage, a goatherd fated to start a war, a swordsman who loves bloodshed, and a hopeless romantic sex worker — as they move through the Smiler's Fair, Levene's novel tells a story in which a few chance encounters can change everything.

Set in an Asian-inspired, decopunk world, Monstress follows Maika, a human-passing Arcanic bearing a physical link to a demon, which manifests as a replacement for her missing arm. Life as an Arcanic is dangerous in Maika's world — where human magicians enslave and experiment on Arcanics to increase their own abilities — and it's only made worse by the fact that Maika has a hard time controlling herself when she gets angry...

The Curse of Chalion by Lois McMaster Bujold

Once a page at Valenda, Lupe de Cazaril was separated from his homeland when he was kidnapped and sold into slavery. Returning home, he receives a warm welcome, and an appointment to the position of secretary-tutor to one of the young royals. Cazaril has no choice but to accept, even though doing so will mean moving in close proximity to the enemies who arranged for his abduction years ago. Tasked with not only teaching, but also protecting, the young sister to the heir apparent, Cazaril will need to lean into dark and deadly magics if he wants to keep her alive in the face of treachery.

More like this
'The Sandman’s Ending Is A Departure From Neil Gaiman’s Comic Book Series
By Kadin Burnett
I've Read The Harry Potter Books 30+ Times & This Plot Hole Haunts Me
By Kelsey Stiegman
The 'PLL: Original Sin' Creators Say A’s Identity Will Be “Very Clear” By The Season Finale
By Alyssa Lapid
Who Plays Trent In 'Never Have I Ever'? Benjamin Norris Calls His Character A “Himbo Stoner”
By Grace Wehniainen and Radhika Menon
Get Even More From Bustle — Sign Up For The Newsletter