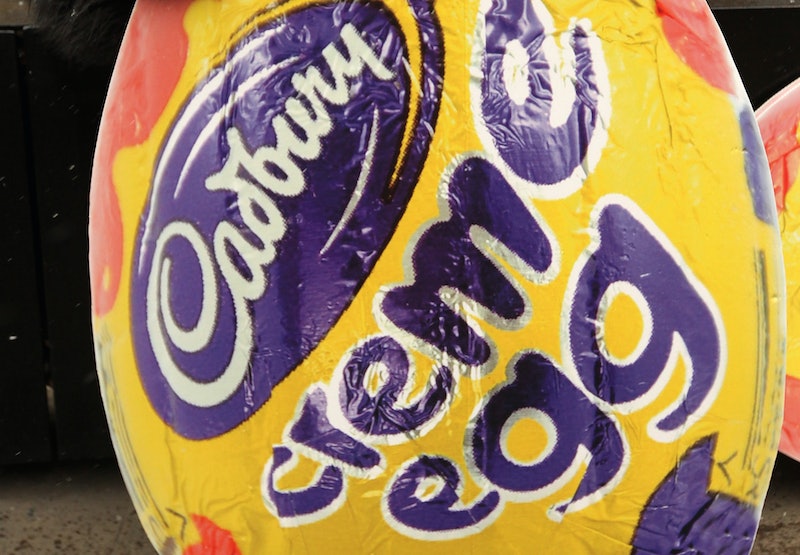 In a real life, Willy Wonka-esque move, the famous British chocolatier Cadbury has released a small number of white Crème Eggs to stores set to be available until Apr. 1, and finding one could give you a shot at winning a cash prize. Yes, I am saying you can literally make money by buying candy. What better reality is there?! That said, there's a catch. C'mon, there's always a catch when money and candy is involved! According to The Sun, this candy hunt is only happening across the pond in the UK. Womp, womp.

That said, if you're looking for an excuse to pack your bags and hop across the pond, surely this is a good enough reason. This year, Cadbury has transformed a small portion of the milk chocolate creamy, caramel Crème Eggs that we all know and love a bit of a makeover for the sake of their epic sweepstakes, as well as to introduce a potential new Crème Egg flavor to the masses. Rumor has it that there are about 371 of the special white chocolate eggs in stores across the UK, all offering different prizes — and some have already been spotted in in convenience stores, grocery stores, news stands, Sainsbury’s Local, Tesco Express and Co-op.

The contest, which will go on until the first of April, includes a variety of small prizes — so if you're on the fence about going to the UK because of the odds, rest assured that there will be a variety of opportunities. Besides, if you don't find a winning egg, you can still check out the Warner Bros. Harry Potter Studio Tour, and try to sneak a peek at the newly engaged royal couple Prince Harry and Meghan Markle. Win-win! While there's only one chance to win the top £2,000 prize (roughly $2702.48), there are 34 chances to win a £1,000 prize, and there are a sprinkling of chances to win £100 scattered throughout stores as well.

As for what these heavenly white eggs taste like? They're only slightly different than the regular Crème Eggs the company puts out. You'll recognize the same ooey-gooey creamy fondant yolk centre — the only difference is that the shell is made out of white chocolate instead of regular milk chocolate. So, like most white chocolate, it will taste a bit richer, a bit more like fudge, and of course, look a bit more like a real egg.

Both the white Crème Eggs and classic Crème Eggs will be in the same packaging, meaning you'll have to purchase the candy before opening it. This definitely makes the contest more difficult, but also keeps the stores from getting totally ransacked. Can you imagine all the poor discarded milk chocolate eggs left behind by white chocolate hungry savages?! But honestly, are you really going to be that disappointed if you open up the packaging and it's a milk chocolate egg? You might be bummed for a few seconds, but let's be real, you're going to eat it, and enjoy it, thoroughly.

If you've made it to the UK and have found a white Crème Egg, call the number printed on the inside of the foil, or mail the wrapper to the address listed for Cadbury, and they'll let you know if your white chocolate egg is a prize winner! You can have your candy egg and make your money, too! Yes, this is literally some Charlie and the Chocolate Factory level stuff.

Why they don't have similar contests like this in the states is beyond me. American foodies and candy lovers are some of the most driven people in the world. They'll go across the city, or across the globe just to try a new dish. So imagine if they had this contest here — we'd probably unearth all the winning eggs in a week! No need for a four month long treasure hunt for us. Hint, hint, Cadbury, send us some winning white chocolate eggs too, please!