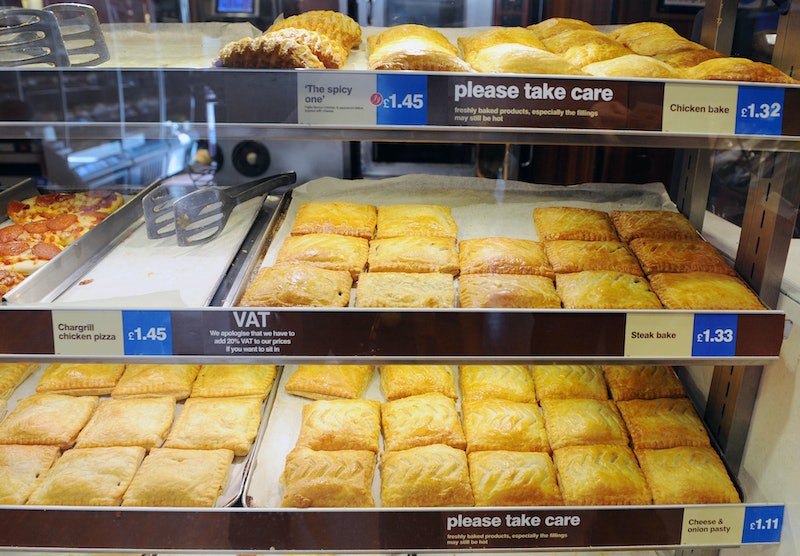 Whether you’ve had a heavy drinking session the night before or are in the mood for treating yourself, sometimes a takeaway is the only thing that will do. It’s easier than ever to get your favourite food delivered right to your doorstep, fuss free and ready to eat. And, if you’re a fan of a steak bake or a vegan sausage roll from time to time (and who isn’t?), it’s your lucky day because, by the end of 2020, the nation's favourite bakery Greggs will available for delivery across the UK.

The bakery empire trialled delivery services throughout 2019 with Uber Eats and Deliveroo in Newcastle, London, and Glasgow. However, the BBC has reported that it was Just Eat that bought into the £5.9 billion deal last week.

If you’re in Birmingham and Bristol, you’ll be able to order a Greggs delivery as early as this week, and the Guardian have said those in Manchester, Leeds, Sheffield, and Nottingham will also have the option for a baked treat right to their door come spring 2020. Greggs aim to roll out delivery nation wide by the end of the year. Eek.

Speaking on the Guardian Andrew Kenny, the managing director of Just Eat UK said, “Greggs has proved extremely popular with our customers, especially during breakfast, demonstrating that as a nation we love the convenience of getting our favourite food delivered.”

As one of the nations favourites, it seems totally natural that Greggs would make the move to add delivery. McDonalds have done it, as have KFC and some of the other most popular fast food companies. One of the pulls of Greggs is it’s so reasonably priced and delicious. There’ll be no minimum spend on your orders but you will have to pay a small delivery charge of £.1.50.

After the introduction of their vegan sausage roll it feels like there hasn't been a day when Greggs is out of the headlines. To say it created a bit of a reaction is an understatement. And it was vegan sausage rolls, along with their meat equivalent and the brand's famous steak bakes that proved most popular with people when the trial delivery service was rolled out in 2019.

This is a long awaited decision for some pasty enthusiasts and there’s one thing for sure: Greggs looks a lot more appealing when you don’t even have to leave the house to get it.