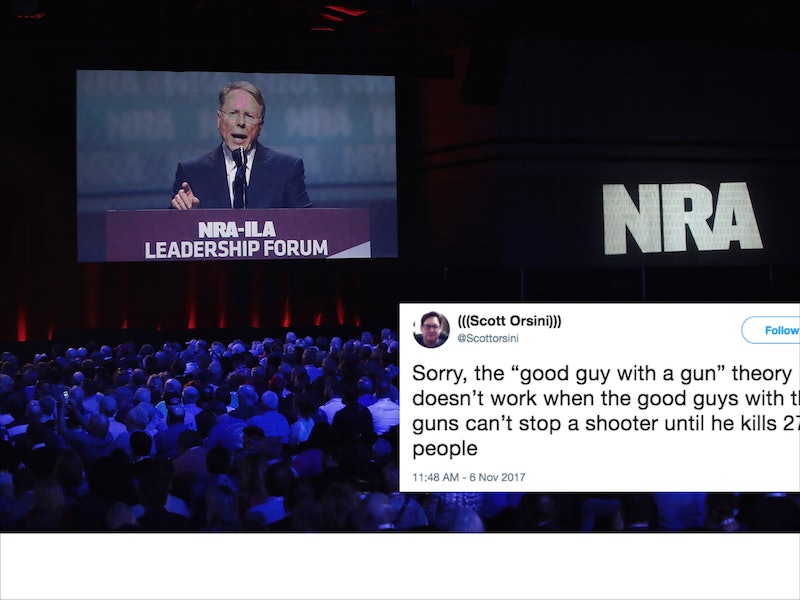 Two of the deadliest mass shootings in U.S. history have taken place in the last 35 days. The gun control debate is constantly roiling, even if it hasn't reached the hallowed halls of the United States Capitol building yet. By now, you've probably heard all of the pro-gun talking points, which get trotted out with such regularity and predictability that gun control activists might as well have canned arguments against each one. One of the most pernicious of those talking points is particularly lasting and dangerous — and you should know how to argue against the "good guy with a gun" theory.

The "good guy with a gun" narrative originated from NRA director Wayne LaPierre after Sandy Hook in 2012, and came up once again in early October, when some people claimed that the Las Vegas mass shooting disproved it. LaPierre had initially made the claim that “The only thing that stops a bad guy with a gun is a good guy with a gun” — an idea which gun advocates have since used to defend their gun ownership after mass shootings, and to argue that getting a concealed carry permit is the best way to protect yourself.

With Las Vegas, the argument flatly doesn't work: Festival-goers simply couldn't have known where to shoot, much less been able to take down the shooter, even if all of them had had assault weapons. With this latest shooting in Texas, however, the "good guy with a gun" theory is sure to get a boost — because it was, in fact, a good guy with a gun who helped to stop the shooting.

Which brings us to the first element of this particular argument: Yes, there are documented cases of good guys with guns ending mass shootings. This is indisputable. There are two ways that you can address this argument, however.

First of all, proponents of the theory simply take mass shootings for granted, as though there's nothing to be done to stop them — despite how regularly they happen in the U.S., and how extremely infrequently they happen in countries with stricter gun control laws. Yes, the good guy in Texas prevented more lives from being lost, but only after a bad guy used an assault rifle that's often been used in mass shootings to kill 26 people. To the loved ones of those 26 people, the good guy with a gun was a mere afterthought.

Secondly, there's plenty of science debunking the idea that more guns make people safer. According to research looking at four decades of data in all fifty states, right to carry laws have no public safety benefit. None. Zero. When right to carry laws were introduced, violent crime rates went up. If the NRA's theory held any water, you'd expect those rates to plummet as the law-abiding public armed itself to the teeth.

Not so, however. Over the period that this particular research covered, crime rates declined much more significantly in the states that had stricter concealed carry laws – which directly contradicts that "good guy with a gun" theory.

Another hole of the "good guy with a gun" theory is that it neglects to take the times when the theory fails into account. After Las Vegas, a writer at ConcealedNation.org claimed that, having talking up the instances of good guys coming to the rescue, "it’s unfair to say that we’d be expected to be prepared for every situation in the world." Effectively, his argument rests entirely on the times when the theory "worked" to at least some extent, and then he excuses himself from accounting for the rest of the cases because, apparently, "it's unfair."

When you're talking about life and death, about parents losing their children, sisters losing their brothers, husbands having to adjust to a new life without their wives, it's not unfair at all. When you're advocating for there to be more weapons on the street in the face of scientific evidence saying that your theory is nonsense and it is a literal matter of life and death, then your theory either needs to be all or nothing. This strategy in an argument is a trademark of someone who can't effectively defend their point.

The same writer also makes the claim that law enforcement officials with guns are effectively the same as armed citizens, which is almost too easy to bat away. Law enforcement officials go through training with their guns, training which of course isn't required of average citizens who set out to buy a firearm in the quasi-military state that the NRA has set out to turn the U.S. into. If the NRA set in motion plans to require that gun owners go through training, this plank in the "good guy with a gun" platform would be a bit more difficult to crack — but that's not the case.

Another idea that often comes up is that mass shooters don't represent the law-abiding, gun owning community. This is also entirely true. Most people who buy guns don't do so with plans to carry out a mass shooting.

However. If you, guns rights advocates, see yourselves as the guardians of freedom, then why not advocate for gun control laws that would require actual work and training to acquire firearms? These exist in many countries, countries that suffer through far, far less gun violence. As staunch liberal and frequent target of conservative bile Dan Savage has repeatedly argued in his podcast, why not make owning a gun similar to having a pilot's license? Or even driving a car? If it took work and training to be able to carry a gun, then maybe even we liberal anti-gun nuts would be able to offer some respect for those who insist on making the streets less safer with their firearms.

Do these arguments have any chance of working? Unlikely, given the fierceness with which both sides of this debate cling to their beliefs. One side, however, has actual evidence to back it up. The other clings to a sheath of blind faith, unable to see through the blood soaking it.

More like this
The Families Of Grenfell Tower Are Still Waiting For Justice, Five Years On
By Bustle UK
How Getting An Abortion Has Changed From The ’60s Through Today
By Amanda Chatel
34 Quotes That'll Inspire You On Juneteenth & Beyond
By Syeda Khaula Saad and Siena Gagliano
Why You're Seeing Green Bandanas At Abortion Rights Protests
By Lexi Inks
Get Even More From Bustle — Sign Up For The Newsletter