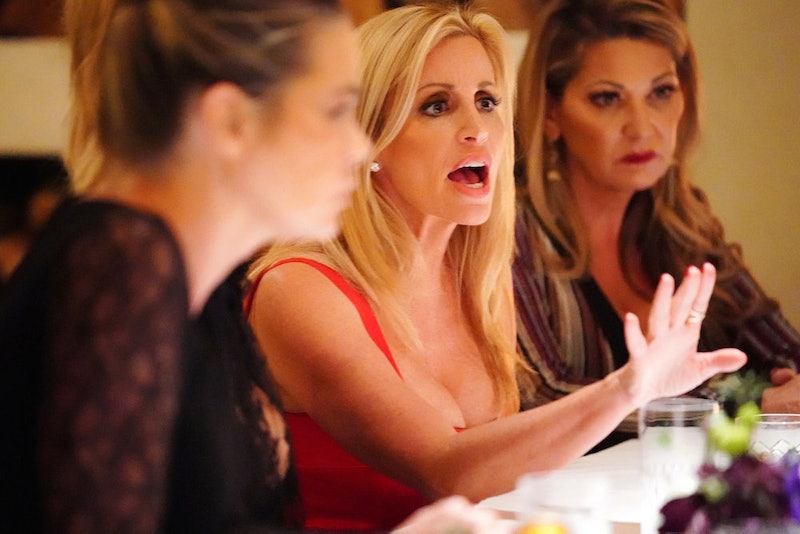 There's always drama on the Real Housewives franchises, but occasionally, that drama becomes traumatic, such as Taylor Armstrong's husband's suicide, NeNe Leake's husband's cancer, or Luann De Lesseps's arrest and rehab stints. These are serious issues — not just TV drama. Another such moment was when Camille Grammer of Real Housewives Of Beverly Hills lost her home in the Woosley fires of Malibu in late 2018. During the women's Provence trip, Camille called to tell her friends that her house was destroyed, but where does Camille live now? The RHOBH star was luckily able to move on with her entire family intact.

In November 2018, per People, the Southern California fires left several dead and dozens without homes, including Camille. As she told People, Grammer was prepping for a Real Housewives trip when she got the call that she needed to evacuate her Malibu home. "I went to my safe and I grabbed jewelry, documents, birth certificates and passports. The bigger pieces of art we couldn’t take, but we grabbed an Andrew Wyeth painting," she said. "I also took some photographs that meant something to me — my great-aunt who passed away a couple years ago. I took pictures of my family. We packed as much as we could into three cars.” Grammer described the scene as "like the apocalypse," and though her family escaped unscathed, the house didn't fair so well. It burned nearly to the ground and was demolished, per People, in December 2018.

Camille and her family lived in a trailer for a bit following the fire, telling Page Six that rebuilding was "a nightmare." She said, “They need to demo the toxic debris because the house burnt from the top down. And they have to remove anything that’s toxic from the house and then they have to demo the rest of it and start from scratch. So it’s going to be a long process.”

As of Memorial Day 2019, though things have finally settled down — according to Bravo, Camille's new Malibu beach house is finally finished. It's a truly lovely house, and the view is amazing, too. "You can’t beat the beach. And this spring, when the sea life comes out, we’ll see the sea lions on the beach, the seals, the dolphins, the whales, it’s spectacular,” Camille told Bravo. “This is why I chose to purchase a house on the beach.”

It's great that Camille, her kids, and her new husband, David C. Meyer, are settled into their new home. It had to have been extremely traumatizing to have to pack up as many memories as possible in a matter of minutes, only to have most of them burned to the ground. This new house gives them a fresh start (and let's not forget the amazing estate that Camille and family owns in Hawaii, too).

Camille and her family were lucky to escape with their health, and now that their living situation is settled, Camille can move onto other things — like sniping with Lisa Vanderpump and planning parties with the rest of the Housewives. It's back to business as usual.