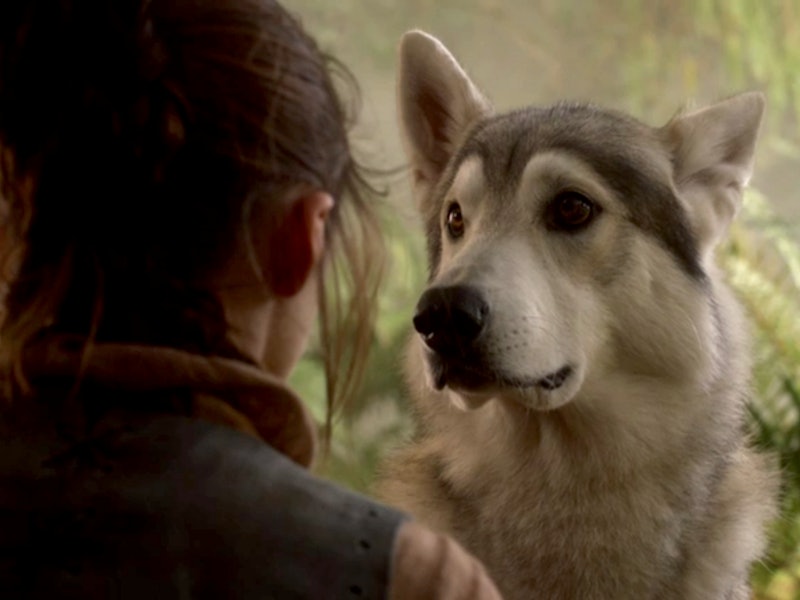 As the world of Game Of Thrones continues to get smaller and characters continue collide, only one meet-up is perhaps more anticipated than the inevitable reunion of the Stark siblings: the reunion between Arya and her direwolf Nymeria. But where has Nymeria been on Game Of Thrones since the last time we saw her? And what has she been up to?

The impending collision between the Stark assassin and her former canine companion was teased in a particularly spoiler-y moment in the preview for Season 7's second episode, "Stormborn." Even as the footage flashed by at a fast pace, the image of a snarling wolf was impossible to miss… which is impressive, given that Nymeria has been MIA on the series since the second episode of Season 1, "The Kingsroad" — an absence of a whopping 60 episodes.

The last time viewers saw the loyal direwolf, she was being chased off into the woods by Arya after protecting her human by attacking Joffrey. Arya knew Nymeria would be executed for biting the crown prince, so she threw a rock at the confused pet to scare her away. It was a heartbreaking moment — especially because Sansa's direwolf, Lady, was just executed instead — but as the cast of direwolves has dwindled (RIP Shaggydog and Summer), fans have been crossing their fingers for an epic return.

…into this ferocious doggo?

On the show, there has been virtually no reference to Nymeria since she and Arya parted ways in Season 1, part of Thrones' consistent de-emphasis of the expensive CGI direwolves in general compared to the books. But readers of George R.R. Martin's novels will know that there have been plenty of clues about where Nymeria is and what she's been doing since she ran off into the wilderness all those years ago.

In A Song Of Ice And Fire's second entry, A Clash Of Kings, Arya starts hearing rumors of a giant wolf pack terrorizing the lands around the Gods Eye (the largest lake in Westeros) while traveling through the Riverlands with Yoren. According to those rumors, these wolves are unusually bold, showing no fear of men. In the next book, A Storm Of Swords, Arya actually sees this pack for herself — and when she howls at them, the largest wolf howls back at her. Also during the third book, Arya starts having wolf dreams similar to Bran's warging vision, in which she sees through Nymeria's eyes while she's sleeping.

By the fourth and fifth book, while Arya's wolf dreams continue across the Narrow Sea in Braavos, reports tell that the pack has grown tremendously, boasting at least a hundred wolves at this point. The pack, led by a "she-wolf of monstrous size," is attacking anything that crosses its path, feasting on the flesh of sheep and men alike.

The confrontation between Nymeria and Joffrey, after which Arya chased the direwolf away, occurred at the Inn at the Crossroads, situated near the Gods Eye. The Season 7 premiere opened with Arya at the Twins, which straddles the Green Fork of the Trident just north of the Gods Eye; and later, when she ran into the troop of Lannister soldiers, she told them she was moving south towards King's Landing on a mission to kill Queen Cersei. Given that geography, that would currently place Arya right around the same territory that Nymeria and her wolf pack have been roaming.

So what will happen once Arya and Nymeria reunite? Well, the show is very far off the beaten track of the books at this point, so it's difficult to predict. But there are indications that the show may be borrowing a discarded storyline from the books and giving it to Arya instead. While readers have waited futilely for Lady Stoneheart to make an appearance on Thrones, the Stark girl's current mission of revenge bears many echoes of that book plot. Could Arya be the show's version of Lady Stoneheart?

Like Lady Stoneheart, Arya is targeting the Freys and anyone else who harmed her family. But also like Lady Stoneheart, Arya may need some sidekicks to complete her mission of vengeance. The resurrected Catelyn allied herself with the Brotherhood Without Banners, enlisting them to hunt down and hang the Freys. On the show, the Brotherhood has already headed north to help fight the White Walkers… so if Arya's going to recruit an army to help her take out her enemies, it may need to be of the canine variety.

(Ironically enough, Nymeria is already closely tied to Lady Stoneheart in the books: she's the one who dragged Catelyn's corpse from the river so Beric Dondarrion could revive her.)

Arya is already deadly enough on her own; once she recruits an army of ravenous wolves and their feral direwolf leader, no one left on her kill list will stand a chance.

More like this
You’ll Definitely Recognise Both Of Ty Tennant’s Parents
By Maxine Harrison
'House Of The Dragon’s Theo Nate Is A “Massive” 'GoT' Fan
By Maxine Harrison
Nicola Coughlan Shared A Lady Whistledown Excerpt From ‘Bridgerton’ Season 3
By Grace Wehniainen, Alyssa Lapid and Sam Ramsden
This Episode 6 Moment Foreshadows Viserys' Fate On 'House Of The Dragon'
By Grace Wehniainen
Get Even More From Bustle — Sign Up For The Newsletter