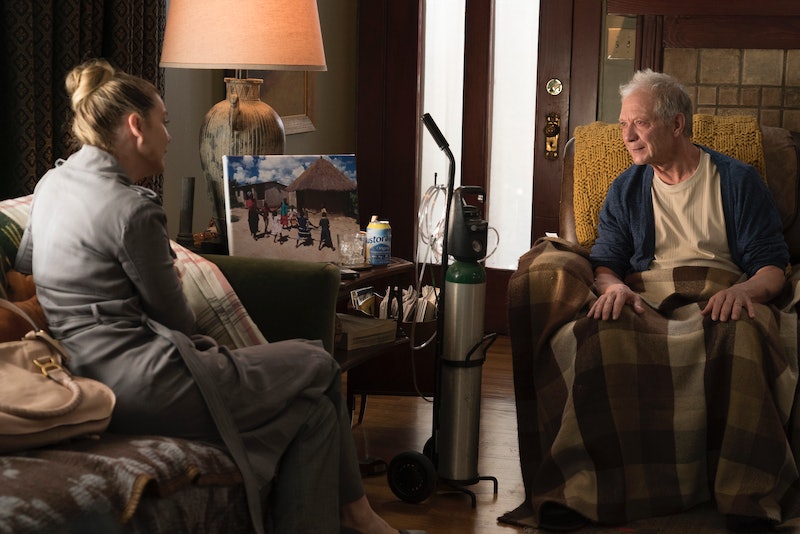 As complicated as Meredith's professional life has been, with lows (interfering with clinical trials) and highs (winning the Harper Avery), her personal life has been even more so. And I'm not just talking about Derek dying, either; her family has been a constant source of tension. Take, for example, Thatcher from Grey's Anatomy. As difficult as her mother could be, and as distant as she often felt from her half-sister, her father has perhaps been the most consistently difficult presence in Meredith's life for many years. Or rather, he was, until he disappeared from her life — and the show — completely. What's he been up to all this time? When was the last time Meredith (and viewers) even saw him?

It was announced before Season 15 even began airing that actor Jeff Perry would be returning to Grey's in the near future to reprise his role as Thatcher. In the sixth episode of the season, "Flowers Grow Out Of My Grave," audiences got the answer to why he would be returning: Richard Webber had learned through a mutual AA acquaintance that Thatcher was in hospice care, suffering from late-stage leukemia, with only weeks left to live. The former chief broke the news to Meredith, who received it ambivalently. But with her colleague Jackson grappling with the possible loss of his own parent, it appears that Meredith will finally be driven to reach out to her estranged father.

Thatcher made his debut on Grey's Anatomy back in Season 2, when Meredith went to his house to confront him and ask why he didn't fight harder to keep his marriage together, choosing instead to flee his own home and leave his young daughter behind. Their relationship, always awkward, completely fell apart in Season 3 when Thatcher's second wife, Susan, died unexpectedly in Meredith's hospital after checking herself in for a persistent case of hiccups. A grief-stricken Thatcher slapped his daughter, and the two never recovered from that charged moment.

In the wake of Susan's death, Thatcher became an alcoholic, leading to his need for a liver transplant in Season 6. Although his daughter Lexie was more than happy to donate, she wasn't a match; but Lexie's half-sister Meredith was. Ultimately, Meredith gave her estranged father the much-needed organ for Lexie's sake, but it didn't lead to any great reconciliation between her and Thatcher.

The last time Thatcher appeared on the show was in Season 7, when he checked into the hospital complaining of persistent stomach pain… and bringing along his much (much) younger, tattooed girlfriend, Dani. Meredith worries the pain is coming from Thatcher's liver, and that her father has been drinking again; Dani worries that it's cancer. In the end, it's merely a kidney stone that's easily removed, and Thatcher leaves the hospital healthy — but not before some family drama, of course.

Interestingly, in her last onscreen interaction with her father, it was Meredith who defended him from Lexie and not the other way around. Dismayed by the presence of Dani, Lexie was afraid that Thatcher was repeating his history of leaving his current family for a new one, and that he'd disappear from her life just like he did to Meredith. However, Meredith encouraged Lexie to be happy for Thatcher, who was clearly doing much better than he had in years. Eventually, Lexie reconciled with both her father and his new partner before they left.

And therein lies the reason why viewers haven't seen Thatcher in eight seasons: Lexie. He was always much closer with his daughter from his second marriage than he was with Meredith. Once Lexie died in the plane crash in the Season 8 finale, there was nothing left for him and Meredith to find common ground over. While their interactions were perhaps less fraught and more icily cordial last time they saw each other, there was still no great love lost between them once they drifted apart after Lexie's tragic death.

So where's Thatcher been this whole time? With both his first wife, Ellis, and his second wife, Susan, dead; still estranged from his eldest daughter Meredith; likely still mourning the loss of his beloved Lexie; with his girlfriend Dani's worst fears of cancer having come true… It may seem like Thatcher has nothing much left to live for, but remember that he does have one other living family member, besides Meredith: Molly, his other daughter with Susan, and Lexie's younger sister.

Molly was a patient at the hospital in Seasons 2 and 3 as she struggled with a complicated pregnancy, but ultimately baby Laura was delivered safely. Presumably Molly and Laura are both still healthy and happy and in touch with Thatcher. While it seems unlikely that Dani is still part of Thatcher's life, it's not impossible.

When Thatcher returns in the Jan. 31 episode, it will be a blast from the past: over half of the show's lifespan will have passed since the last time he appeared onscreen. He and Meredith will undoubtedly have much to catch up on… but will Thatcher have the time to apologize? Or perhaps the better question is: will Meredith have the patience to hear him out?