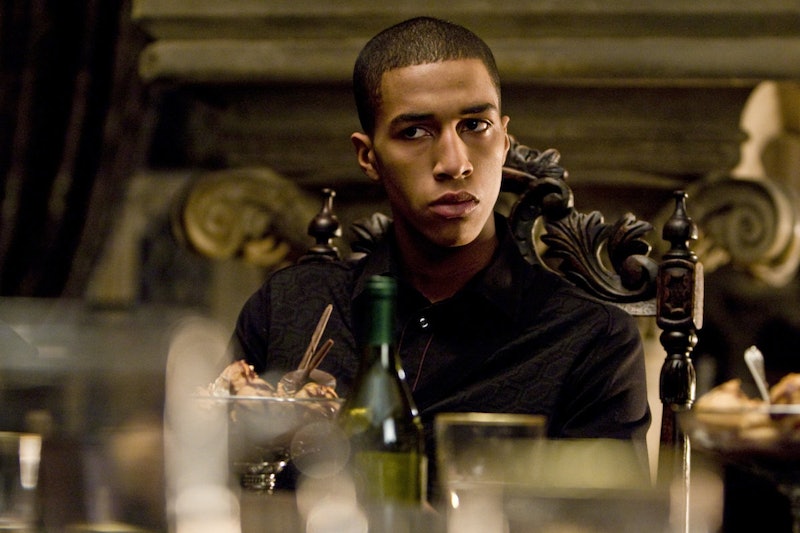 There were a lot of students at Hogwarts School of Witchcraft and Wizardry who we came to know and love or hate over the years, and who, on movie screens, we got to watch grow up. In Slytherin House, there was a certain handsome nefarious fellow who palled around with scowl-y Draco Malfoy: Blaise Zabini, who was not, as his name suggests, a pasta dish and/or a member of One Direction. He was very cute and very evil, though. In the Harry Potter films, he was played by actor Louise Cordice, so what's the man behind Blaise Zabini up to now?

Per the internet, he's not acting anymore, but that's cool. If your only acting gig is playing a Slytherin in the Harry Potter series, you're doing quite all right for yourself. In fact, his Instagram bio (sadly his account is private, like he wants "privacy" or something, smh) says "Just that guy from Harry Potter." Just casual.

He's not super active on Twitter either, although Cordice does use it to show his intense British-ness, because most of his tweets are about football (like, soccer football), none of which I even remotely understand. Cheers! It also looks like he recently had a baby girl. And when Alan Rickman passed away in January, Cordice paid his respects to his Professor Snape. :(

If you want to revisit Blaise in the HP films, he doesn't do a whole lot of talking, sadly, but he is in some crucial scenes. He's a member of Professor Horace Slughorn's Slug Club in Harry Potter and the Half-Blood Prince, and you can catch him at the Slug Club Christmas party where Hermione tries desperately to get rid of Cormac McLaggen. He's a player on the Slytherin Quidditch team, and he's, of course, in Potions class with the rest of the Slytherins and Gryffindors. You can also catch him ready to sell Harry out to Voldemort in the Great Hall in The Deathly Hallows — Part 2, with Pansy Parkinson and the rest of those Slytherin swine ready to give Harry up (not that all Slytherins of all time are evil, but these rats in particular were).

His big scene, though, is one he wasn't supposed to be in at all: during the fight in the Room of Requirement during the Battle of Hogwarts. Originally, it was Malfoy and his lackeys Crabbe and Goyle who cornered Harry, Ron, and Hermione as they sought the Ravenclaw diadem, and Crabbe who set the Fiendfyre spell upon them. Cordice as Zabini ended up in the scene because, IRL, the actor who played Crabbe, Jamie Waylett, was doing community service for growing marijuana. Guess he should have been a Hufflepuff.

No signs that Cordice will return to acting any time soon, but I'm sure fans will keep refreshing that IMDb page just in case.