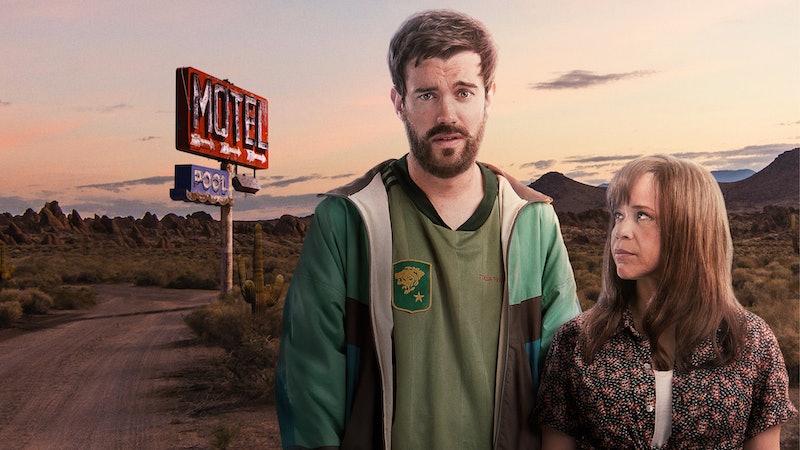 The Sky One comedy series Bounty Hunters is back, and very soon. The second season of the show, which stars comedian and actor Jack Whitehall, is set to debut this week — and fans are in for a real treat, because the entirety of series two will then be uploaded to the broadcaster's on-demand service soon afterwards. The first series of the comedy followed a British antiques dealer who somehow becomes embroiled in international organised crime. But where is Bounty Hunters filmed?

Bounty Hunters follows the story of Barnaby Walker (Jack Whitehall), an antiques dealer's son who becomes wrapped up in international organised crime by accident. Then, as Whitehall's website explains, "[h]elp arrives in the form of tough Brooklyn bounty hunter Nina Morales [Rosie Perez], who happens to be on the run from a Mexican cartel."

Season one of Bounty Hunters appears to have been filmed mainly in London. As the Daily Mail reports, the show saw Whitehall and Perez "[c]hasing around the capital’s attractions, like Tate Modern and the London Eye," and other famous landmarks such as St Pauls can be spotted too.

The South London borough of Lambeth featured heavily in season one of Bounty Hunters. According to FilmFixer, the film office service for Lambeth Council, the scenes in the Walker family home — which appears a lot in season one — were filmed "in a property on Knatchbull Road in SE5." In addition, FilmFixer says "a big scene was filmed in Park Plaza on Westminster Bridge Road in Lambeth."

FilmFixer also revealed something pretty cute about comedy car that Whitehall and Perez travel around London in:

"One of the comedy devices in the show is the G-Wiz electric car, described once as 'having the performance of a sleepy vole and the structural integrity of your slippers.' Lambeth welcomed a scene with the car driving along Tyers Street. The production very generously made a donation to Vauxhall Gardens Estate Residents & Tenants Association by way of thanks."

Season two of the Bounty Hunters, on the other hand, was shot in both the UK and Spain, comedy.co.uk reports. According to the Daily Mail, Whitehall found in tough filming in the "40°C heat" in Spain, which was a stand-in for Mexico.

"It was far too hot," Whitehall told the newspaper, "and we were filming where they shoot Game Of Thrones so the locals were very disappointed when they saw it wasn’t them.

Bounty Hunters series two was originally set to return on Thursday March 14 on Sky One, however, as reported by TV Wise, the second season will now make its debut one day earlier, on Wednesday March 13 at 10 p.m.

The comedy will return for a total of five episodes, each of which are produced by Ben Cavey and Pippa Brown. According to the British Comedy Guide, an official teaser for the Sky series reads: "Series two will see Barnaby and Nina back with a bang — quite literally — ready for more adventures and scrapes in the second instalment of this hit show." The series was created by Whitehall and Freddy Syborn — a longtime friend and collaborator of the comedian, who also worked on the BBC series Bad Education.

Joining the cast of Bounty Hunters in series two is Steve Pemberton, who will portray the character of Colin McQueen, a history teacher at Eton College. McQueen's interests lie in the 'specialist' end of the antiques market, which previously led him into contact with Barnaby's dad, Nigel Walker (Robert Lindsay). After Nigel's death, Colin is keen to get his hands on a final, rare piece of art — and his might just be the person to help him.

As reported by Bustle, Pemberton, who is known for his roles in The League of Gentleman and ITV's Benidorm, has previously expressed his delight at being asked to join the Sky comedy. In a statement, the actor said: "It was a thrill to be asked by Jack and Freddy to play a sinister private school teacher with an unhealthy interest in Nazi memorabilia — frankly they had me at 'sinister' — and it proved a peach of a role which I devoured (apart from the stone, that would be unhealthy)."

The second season of Bounty Hunters starts on Sky One and Now TV on Wednesday March 13.