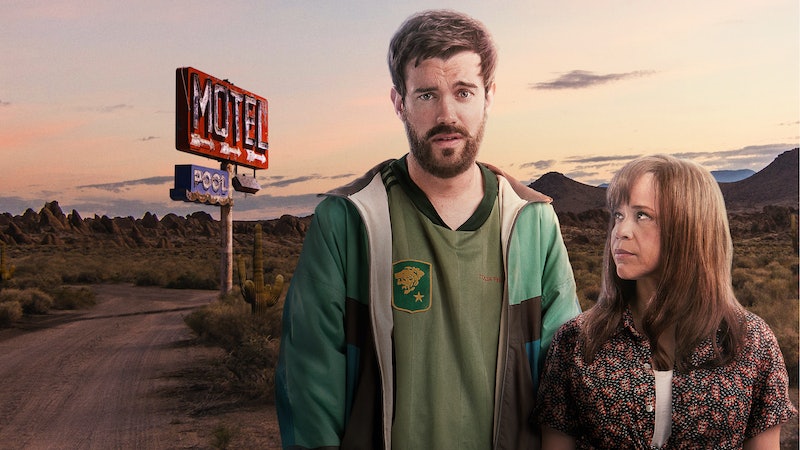 It's safe to say that Jack Whitehall has become somewhat typecast. Usually found starring as a privately educated man with little real-world experience, the comedian-slash-actor managed to change the game in TV series Bounty Hunters. It was so popular that Sky decided to renew it for a second season. So when does Bounty Hunters start?

The comedy thriller is back for another five episodes. Airing on March 14, the series will once again follow Barnaby Walker (played by Whitehall) and bounty hunter Nina Morales (played by Rosie Perez). The first season — which was written by Whitehall and Freddy Syborn — introduced viewers to the Walker family.

Barnaby's father, Nigel, was pegged as a dodgy antiques dealer. After he was hospitalised, Barnaby was left to help the failing family business. But instead of helping, he proceeded to lose £50,000 and end up with a looted antiquity from Syria. To regain his money, he teamed up with bounty hunter Nina. Throughout the series, the pair ended up in some ridiculous — yet still entertaining — scenarios.

If you've still got to catch up on the first season, quit reading now. When viewers last saw Barnaby, he and Nina were preparing to abduct a gangster while Barnaby's sister Leah (played by Charity Wakefield) was enjoying a stay in a Mexican prison.

It has now been revealed that actor Steve Pemberton will be joining the cast for the second season. The 51-year-old — who you'll probably recognise from Benidorm and Whitechapel — is set to play Colin McQueen, a villainous history teacher who has some rather niche tastes in art.

"It was a thrill to be asked by Jack and Freddy to play a sinister private school teacher with an unhealthy interest in Nazi memorabilia — frankly they had me at 'sinister' — and it proved a peach of a role which I devoured (apart from the stone, that would be unhealthy)," Pemberton said in a statement.

Although the series does see Whitehall falling into familiar territory, it pushes him way out of his comfort zone. Plus it's nice to see a strong female character for once. In fact, it seems as if Whitehall had Perez in mind for the series the entire time.

As The Sun reports, the pair met during the filming of a pilot years ago. “It wasn’t very good. But she was great, and the scenes with me and her were the most fun," he told the paper. "So we said: 'Let's write a show for us both.'"

Perez — whose most notable role was in the 1992 film White Men Can't Jump — admitted to iNews that she thought the script was "completely ridiculous" but was still up for taking on the job.

Series two seems like it will expand the Bounty Hunters universe. In a statement, Syborn and Whitehall said: "We are thrilled to be given an opportunity to delve deeper into the characters we had such fun with in series one. The second series of Bounty Hunters allows us to build on the characters and also gives the audience a glimpse into other storylines."

Best set a reminder for this one.

The second season of Bounty Hunters starts on Sky One and Now TV on March 14.