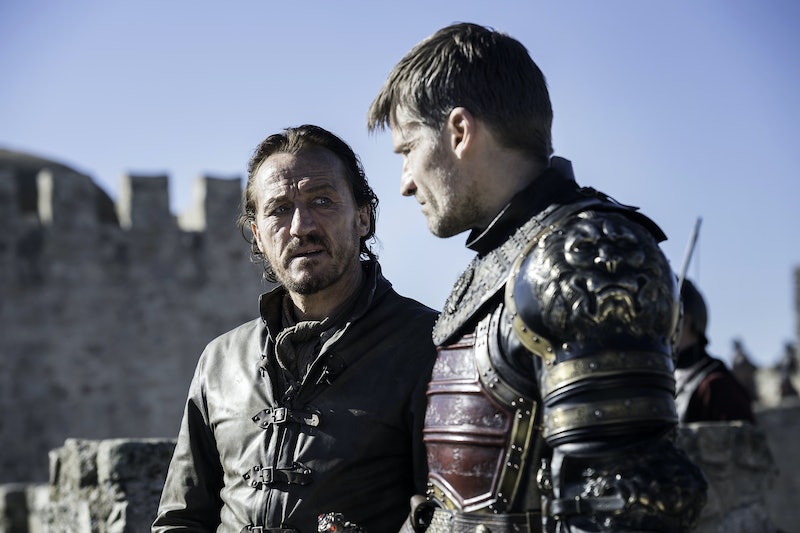 Bronn has long been a close ally of various members of the Lannister family, first Tyrion prior to the youngest Lannister sibling's escape from King's Landing, and later Jaime during their buddy-cop road trip to Dorne. It's his connection to the two brothers that allow the planning of the meeting between Cersei Lannister and the dynamic duo of Daenerys Targaryen and Jon Snow, but when it comes to the meeting itself he decides to opt out, telling Podrick that the two don't need to be involved in the discussion between the powers-that-be about the fate of the world.

That's the last that audiences see of him in Season 7, so it's possible that Bronn is right where the show left him — standing just outside of the Dragonpit having a conversation with Podrick as they exchange barbs. More realistically, Bronn is either somewhere in King's Landing, tracking down his old friend Jaime after the Kingslayer's departure from King's Landing, or he finally got that castle that Jaime has been promising him.

Beyond that, it's hard to say just what Bronn is up to now. His storylines in the past have always involved him being indebted to a Lannister, and there's not much of a reason for him to get involved in the larger events of Westeros, let alone King's Landing, without a hefty payment. The honors and oaths of a Knighthood never seemed to appeal to Bronn as much as the promise of a castle and a high-born wife, but if there's one thing that Ser Bronn of the Blackwater can get on board with it's a good battle.

The opportunity to fight alongside others against the White Walkers and their wights may be exactly the kind of epic fight that Bronn finds joy in winning. Granted, the last time he came face-to-face with a Dragon didn't go all that well for him, but it certainly turned out better for him then it did for the Tarlys or most of the Lannister forces.

Bronn has made a point out of resisting an allegiance despite being attached to the Lannisters, but it'd be pointless for him to not align with the living in the war against the wights. For a person who has spent the entire series trying with all his might not to care about anything outside of himself, the final season of Game Of Thrones might finally find Bronn fighting for something without the promise of payment.