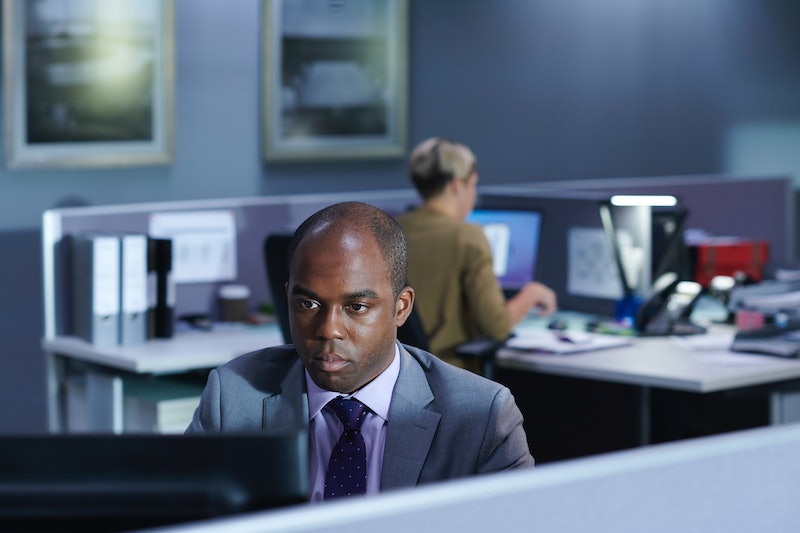 Created by Mark Bartlett, ITV's Sticks & Stones explores the underexplored issue of bullying in the workplace, and how drastically it can affect those at the centre of it. Over three episodes, the series follows Thomas Benson (played by Ken Nwosu) who messes up a crucial pitch which sends him into a downward spiral. Set in Reading, the story mostly takes place in a very realistic looking office building. So where is Sticks & Stones filmed, and were real-life locations used?

Like The Office UK, which was filmed in a vacant office next to Teddington Studios in Richmond, Sticks & Stones was shot in a disused office block in the Hampshire town of Hook, according to HITC.com. This space was transformed into the fictional Clayton Office Solutions company, but it was initially quite hard to find for the production team. "Finding our office building was really hard because usually you have people working in them and we needed to find one that wasn't occupied but was furnished," Catherine Oldfield, executive producer of Tall Story Pictures, told ITV.

"We wanted a really big space to get a sense that this was a successful company that's going places. We wanted a location that gave us a range of exteriors, in particular the car park, so that we could see characters within looking down on our main character Thomas," she continued. "That would give us a sense of having nowhere to escape to. You can be watched from wherever you are."

Filming began in September 2018, and as the series is set in Reading, there were many exterior shots used to make the Hook office space feel like the Berkshire town. Sticks & Stones utilised other Hampshire locations like Aldershot, where a real residential home was used for Thomas Benson's house, and also the Surrey town of Ripley.

When it came to setting the show in a particular place, Reading was chosen due to creator Mike Bartlett and Oldfield's connections to the town. "We are a country full of towns and cities with small business parks on the edges where lots of people work," Oldfield said. "In that sense it's a very familiar, easily accessible world that we felt audiences would recognise; from how the meeting rooms worked and which water cooler works to how the car park operates."

"With only three hours of television, and with this subject matter, we were keen [for] the world to be instantly accessible to the audience."

Sticks & Stones begins tonight (Dec. 16) on ITV at 9 p.m., and will continue over three nights.

More like this
ITV’s New Take On 'Love Island' Is Only For MILFs & DILFs
By Sam Ramsden
Twitter Is Burning As Phoebe Dynevor Reveals Daphne’s 'Bridgerton' Exit
By Sophie McEvoy
Helena Bonham Carter Doesn't Think 'The Crown' “Should Carry On"
By Sam Ramsden
'Happy Valley' Recreated This Moment From S1 In Its Penultimate Episode
By Sophie McEvoy
Get The Very Best Of Bustle/UK
Sign up for Bustle UK's twice-weekly newsletter, featuring the latest must-watch TV, moving personal stories, and expert advice on the hottest viral buys.