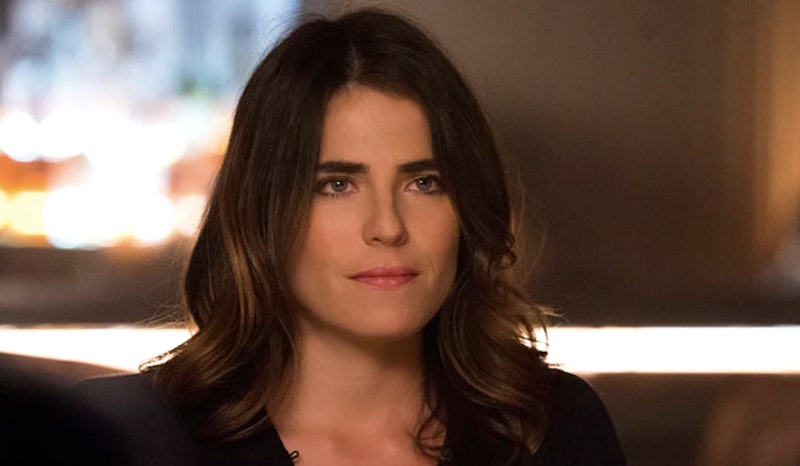 Lauren found out she was pregnant in Season 3, and, soon after, Wes — her baby’s daddy — died, because Laurel’s father had him killed. It's still not really clear why, but it’s safe to say we’ll probably find something out soon, or at least a clue to something. Laurel knows that her very powerful Mexican father killed her boyfriend, and she was so close to asking him why in the Season 4 premiere. But don’t do that yet, Laurel. You have to play some of your cards close to the vest for now, which it seems like she's doing. She told her father in the Season 4 premiere that she had an abortion and not to tell her mother, but in reality, she confessed to the Keating 5 and Bonnie that she’s four months pregnant and she wants to have Wes’ baby.

If this were any other show that would be the end of the story, but How To Get Away With Murder is unlike most shows. At the end of the Season 4 premiere, in grand How To Get Away With Murder fashion, there is a three-month flash-forward, and Laurel is barely conscious in a hospital bed. Frank comes in, and Laurel is frantic, asking where her baby is and what happened to her. It looks like some kind of psychiatric facility, and Annalise’s therapist aka Jimmy Smits is there. What the what? Three months from prior events would put Laurel at about seven months pregnant, and a baby born at 28 weeks has about a 92 percent chance of survival outside the womb. Those are good odds, which means her baby may have at least survived. Where is Laurel’s baby, then?

Not only is it enormously messed up to do something medically to a woman without consent, it’s terrible that Laurel’s baby could have been taken away from her without her permission, too. It doesn’t seem like she gave the baby up for adoption — Laurel wanted that baby, and now that baby is missing. Laurel’s autonomy has been taken away from her, and it’s horrifying to watch her anguish.

In a conversation with TV Line, Karla Souza, who plays Laurel, was up to the task of Laurel's terrible circumstances. "I couldn’t even imagine what the acting challenge would be like," she said. "If you had a baby, and you’ve been waiting for it for however many months, and preparing for it, and then suddenly you wake up and it’s not there? Of course all the questions were, where is it? Is it alive? Who has it? She’s doing all this stuff to avenge Wes, and at the end, it’s going to be gone. It’s going to be a huge turn for her. I don’t know what’s going to happen afterward."

If the actor has no idea what's going to happen, what chance do the rest of us have? Laurel's baby could have been born prematurely and taken away from her, or Laurel could have lost the baby earlier than seven months and been so obsessed with the thought of having Wes' baby and avenging his death that someone (probably Annalise) felt the need to lock her up. Maybe her father killed the baby because it was Wes'. Either way, this is some heavy stuff, even for How To Get Away With Murder.