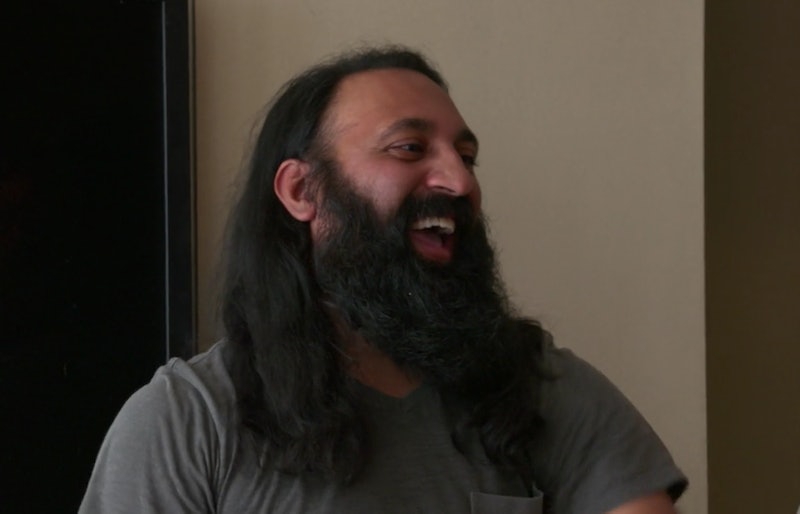 When it came to the second episode of the show, the mission with Neal Reddy on Queer Eye was clear from the start: "We need to give that man some 'sass' in that Sasquatch," said Jonathan Van Ness, Queer Eye's grooming guru and all-around delightful human. The transformation that followed in Netflix's new reboot was nothing short of a miracle, so of course you'll want to know what's up with Neal from Queer Eye now. Judging by a few choice Instagram comments, it looks like Neal is still in touch with the Fab Five — and they're still doling out some very sassy advice.

Thanks to the efforts of the Queer Eye guys, Neal's newfound confidence has really started to shine. In his most recent selfie from Feb. 27, he wrote, "Nothing to see here. Just a dude who buttons his top button, bites his bottom lip and takes bathroom selfies. Move along now." Bobby Berk, the show's resident interior decorator, clearly approved. "Handsome fella!" he commented. Hate to break it to you, Neal, but the Fab Five and your flock of fans won't be going anywhere if you keep on looking so damn dapper.

In another post from Feb. 14, Neal combed his hair down at an angle, snapped a selfie, and shared the shot on Instagram. "Emo bangs today because I'm feeling very emotioNEAL for Valentine's Day. Get it?" he captioned the pic. He also include a few self-depreciating hashtags, including: #foreveralone, #solo, #tablefor1, and #novalentine. Look out ladies, this dude is most definitely single!

It's worth noting that Neal didn't really do selfies when he was covered in crazy amounts of hair (both his own and his dog's). Or, rather, Neal didn't really do selfies any sense of confidence — until now. Pre-Queer Eye, the selfies Neal took — like this one from November 2016 — were captioned with words like "lonely" and "bearded castaway." In another post from January 2018 (which was actually a throwback to his old look), Neal used the hashtags "#urbansasquatch" and "#bombayteenwolf" to describe his aesthetic.

Post-Queer Eye, though, Neal has stepped up his selfie game in a major way — and the Fab Five has definitely noticed. Almost all of the guys regularly "like" the photos that Neal posts of himself. It appears as if one member of the Fab Five in particular, however, is still doling out the occasional bit of advice.

After Neal posted his #emo Valentine's Day selfie earlier this year, Jonathan Van Ness (via Tan France's Instagram account) commented, "Neal this is Jonathan ima need you dm me about this." As the show's resident groomer, Van Ness arguably put in the most work with Neal, and clearly wasn't pleased with what Neal had done with his hair.

In fact, Van Ness told BuzzFeed that, for him, Neal's transformation was the most difficult one of the entire season. "I had the most to work with," he said of Neal's pre-transformation look. "I had the most area to play with him, I had some hair and I had a beard to work with. But he was also really reticent to cut it off." Van Ness continued, "I've never washed someone’s hair and given that gorgeous of a head massage and had their legs be, like, bolt outright. He was literally so nervous."

His comment on Neal's Feb. 14 selfie was clearly just in good fun, but it's cool to see that the Fab Five are still keeping tabs on the show's subjects. You can tell that they're really connecting with each guy in every episode, and the way Neal opened up after his transformation was especially touching.