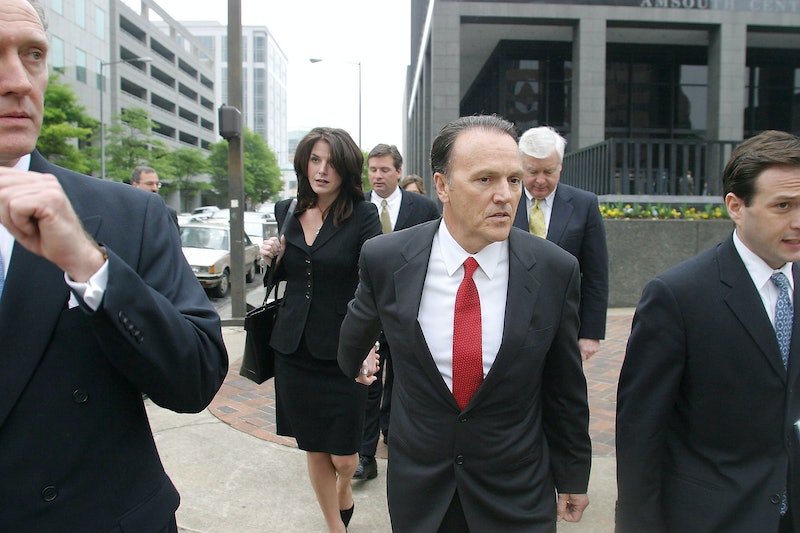 Episode 4 of Netflix's Trial by Media follows the case of Richard Scrushy, the former CEO of HealthSouth Corporation who was accused of financial fraud. Today, Scrushy still advertises himself as a businessman and entrepreneur, but he did serve time in prison — just for different charges. He was acquitted of fraud in 2005 only to be convicted in 2006 for bribing a governor in exchange for a seat on Alabama's hospital regulatory board.

But it's Scrushy's first case that looms largest in public memory. After helping to build HealthSouth into the nation's largest for-profit chain of rehabilitation hospitals, he was fired in 2003 amid accusations that he inflated patients' Medicare bills for company profit — making him the first CEO of a major company to be charged under the Sarbanes-Oxley law. Despite dozens of former HealthSouth employees testifying against Scrushy, he was cleared of all charges on June 28, 2005. Several jurors told the New York Times that they found the accusations against him convoluted "hearsay," while a Birmingham Times writer claimed Scrushy had paid her to run favorable articles, which may have turned local opinion in his favor. According to legal analysts, Scrushy's verdict exposed just how difficult it is to prove something as complicated as corporate fraud, even potentially emboldening more corporate executives to stand trial.

Thanks to overwhelming media coverage of his trial, Scrushy also became a corporate celebrity; Hollywood even considered making a movie about his case. But his success was short-lived: just four months later, he was indicted on separate federal charges of bribery and mail fraud. Scrushy was found guilty in 2006 and sentenced to six years and 10 months in federal prison, as well as fined $150,000 and ordered to pay $267,000 in restitution to the United Way of Alabama.

With Scrushy's prison sentence came several other legal woes related to his earlier HealthSouth trial. In 2006, Scrushy was ordered to pay HealthSouth $31 million as part of a settlement over his inflated bonuses and legal fees. In 2007, he was also ordered to pay more than $81 million to the Securities and Exchange Commission. Scrushy was estimated to have $275 million in assets in 2005; it's not clear how much of these settlements he's paid since then.

Scrushy maintains his innocence to this day, and he's currently working as a "speaker, businessman, [and] entrepreneur," according to his personal website. Per his LinkedIn, he's the CEO of 7venth Power, Inc., though it looks like he's the company's only employee. He also has a Twitter account that he doesn't seem to be active on, but his history suggests he's a Trump supporter.