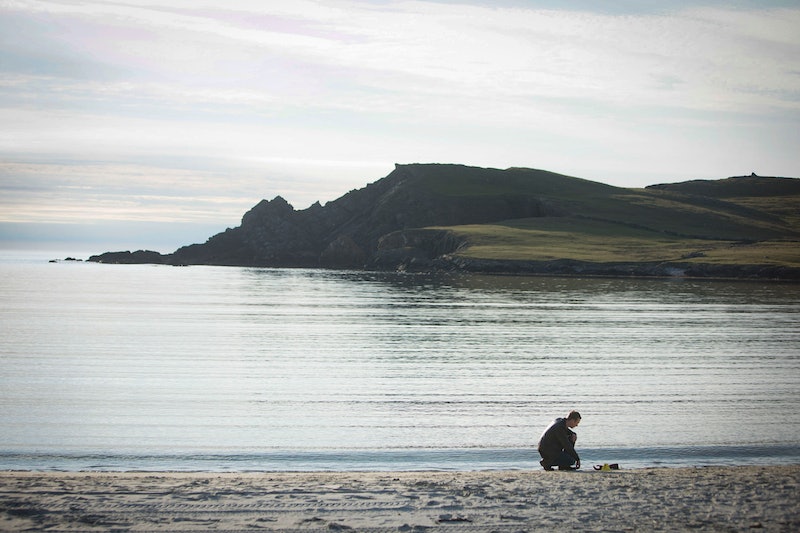 On Tuesday evening the long awaited Shetland will be returning to BBC One for its fifth season. The crime-drama, which was originally based on novels by Ann Cleeves, follows Inspector Jimmy Perez, Constable Sandy Wilson, and Sergeant Alison "Tosh" Macintosh as they solve murders on the scenic cluster of islands in Scotland. Other than it's superb storylines and chilling murders, Shetland is undoubtedly known for its spectacular Scottish landscapes and rippling coastal views. But where is Shetland actually filmed and is the quintessential scenery really shot in the Scottish archipelago like the name suggests?

Audiences first saw the breath-taking backdrop of the Shetland islands back in 2013, and the location is undoubtedly a big part of the appeal of Shetland. Douglas Hensell, who plays Inspector Detective Jimmy Perez, explained to the BBC that the landscape was "another character in the show," and it really is one of the highlights of the murder-mystery drama for audiences.

The Shetland isles are a cluster of islands located to the northeast of mainland Scotland. They are made up of over 100 individual islands but only 15 are actually inhabited, with the largest population being in the capital of Lewric. According to Shetland's official travel site, the coast has barely changed over many millions of years.

Over the five seasons, some of Shetland has been filmed on location, but the show has also been known to film on mainland Scotland, most notably Glasgow, and even in Norway giving the appearance of the Shetland islands, BT reports. Because Shetland is midway between the mainland of Scotland and the Nordic region of Europe, it clear why filming in Norway was an ideal choice given the coastal geography is so similar that audiences probably won't be able to tell it was shot on the continent rather than on the Scottish isles.

Shetland is often filmed in the capital Lewrick; known as "mainland," it the biggest of the islands that make up Shetland. As shown on Shetland's office website which gives a guide of featured locations fans can visit, in Season 2 they shot at Shetland Museum and Hay’s Dock Café where Perez meets an archaeologist. And Da Lodberrie, Commercial Street in Lerwick is also frequently featured as the location for Jimmy's home.

Filming did however take place on some of the smaller islands in Shetland in the earlier seasons. Speaking to the BBC, Bill Patterson, who plays James Perez, talked about his experience on one of the more remote locations, Fair Isle. "The flight to Fair Isle was incredible. The plane was tiny – it was really a transit van with wings on it - in fact it was flimsier than a van."

According to The Express, in Season 5, the police station is actually situated in Barrhead, southwest of Glasgow which is also where actor Douglas Hensell grew up. And Ayr and Irvine in North Ayrshire are other key locations for filming.

Whilst not every scene is actually filmed on site, Shetland is nonetheless still beautifully shot with a mesmerising backdrop that keeps audiences hungrily coming back for more. Shetland Season 5 will be airing on BBC One on Tuesday evening at 9 p.m with a further 5 episodes released over the coming weeks.