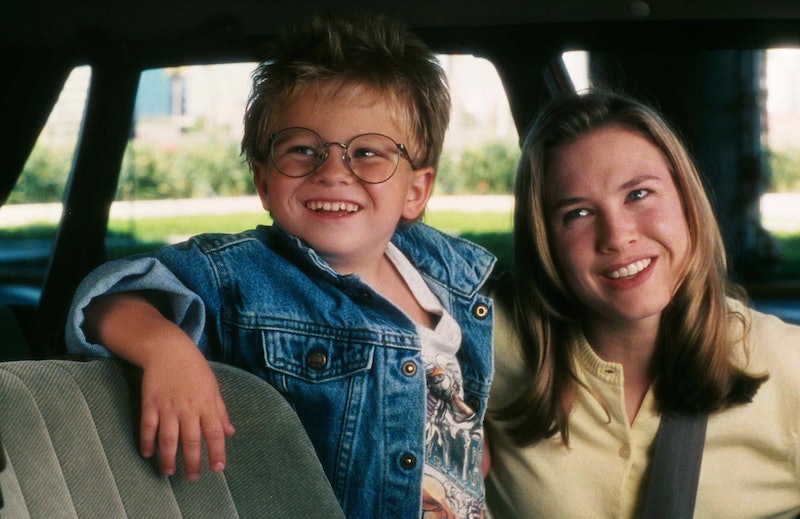 Since he's talking about the 20th anniversary of Jerry Maguire, out on Blu-ray now, Jonathan Lipnicki would like to clear something up. At just six years old, the actor informed the world about the weight of the human head and chastised an adult for his pottymouth in his first film role as Ray Boyd, son of Renee Zellweger's widowed character Dorothy. At the end of the movie, Ray lets a baseball rip, much to the delight of Jerry (Tom Cruise), his sports agent step-dad. "I threw that ball!" Lipnicki tells Bustle in an interview. "I practiced all day the day before, and I really threw that ball."

Ray is an extraordinary kid. And in the part, a very young Lipnicki is just as special. It's not just the cherubic face, spiked hair, or the Harry Potter glasses perched on his nose, nor is it that slight and adorable lisp in his voice as he solemnly counsels a drunk Jerry. Jerry Maguire is a movie about grown-ups with grown-up problems and it features one of the most memorable performances by a child actor in the last two decades. Lipnicki, who says he remembers all the feelings associated with working on the Cameron Crowe film if not the actual process, isn't eager to take too much credit. "It would have been an amazing film if I’d been involved or not," he says. "And I’m lucky to be a small part of that."

A good portion of Jerry Maguire's appeal lies with the chemistry of the ensemble. It's there between the newly idealistic Jerry and his adoring employee Dorothy and between Jerry and his only client Rod Tidwell (Cuba Gooding Jr.). It practically radiates from any scene involving some combination of Ray, Dorothy and Jerry. And that's for a very simple reason, according to the now 26-year-old actor. "I genuinely loved them," Lipnicki says. "Loved Renee, loved Tom. And they were so warm to me, so welcoming...I don’t think we had to do much to establish it; it organically happened."

This big break almost didn't happen, however. Originally, another actor was cast in the part of Ray. The change was so last minute that Lipnicki and his mother were flown to the Arizona set on the day he was offered the part and then whisked into a reading with the filmmaker and the star. "That was my first meeting with Tom," Lipnicki says. "I was so excited because I loved Top Gun. He comes with his big movie star smile into his trailer and I’d never met anyone like him. And to this day, I’ve never met anyone like him. He has so much charisma and so much focus, it’s a beautiful thing."

Lipnicki's relationship with Cruise mirrors Ray's to Jerry in that he's still a bit in awe of him. They keep in intermittent touch, and the younger actor says Cruise has "always left the door open" and been a fountain of advice. Still, the hero worship is hasn't quite gone away. "It’s amazing," Lipnicki says. "I could meet the guy a million times and it’s always a surreal thing, seeing him again. I still look up to that guy. I still see every Tom Cruise movie that comes out in theaters."

And if you're still in the industry like Lipnicki is, you couldn't have a better mentor. After stealing scenes and hearts in Jerry Maguire, Lipnicki became a hot commodity, scoring roles in family films like Stuart Little, The Little Vampire, and Like Mike. But like many actors who found fame at a young age, Lipnicki is now striving to redefine himself as an adult for audiences who'd like him to stay a kid forever. "I’m never going to sugarcoat things when I talk to people in interviews," Lipnicki says. "It’s been a really hard transition. It’s hard to shake people’s ideas of who I was in the past, but if you really love something... anything worth doing is going to be difficult."

One of Lipnicki's outlets for dealing with the quirks of the business is humor. He's poked fun at his forever-young status in comedy sketches like "You Used To Be Cute," a parody of a casting call in which he plays himself. Lipnicki says it took "a lot of growing up" to get to a place where he can brush off those type-casting frustrations. "For me, it was embracing [the past], not trying to fight it," he says.

During his 20-year career, Lipnicki has seen the industry change. "Now you have tentpole projects and you have indies. There's really no mid-range stuff anymore." Even if he were looking to recapture the singular success of Jerry Maguire, those changes mean that movies like it are not poised to attain the same kind of box office receipts. "Right now it's about finding really interesting roles," he says. Lipnicki's recent work includes the high school comedy Loserville, co-starring Matt McGorry and Jamie-Lynn Sigler, and Interns Of F.I.E.L.D., a web series parody of the similarly named Marvel series.

So Jonathan Lipnicki's past and future lie in Hollywood. But what about Ray? Was that pitch the harbinger of future sports celebrity? "I do think Ray grew up to be a baseball player," the actor muses. "I hope he grew up to visit the zoo many times. I hope a lot for Ray."

More like this
Laura Dern Said “Cultural Awareness” Made Her Rethink This 'Jurassic Park' Fact
By Grace Wehniainen
Amanda Seyfried Reflects On 'Mean Girls' & "Gross" Remarks That Men Made After It
By Jake Viswanath
'Dirty Dancing's Jennifer Grey On The Tearful Moment That Changed Her Relationship With Patrick Swayze
By Sam Ramsden
Where Is Dr. Cline Now?
By Morgan Leigh Davies
Get Even More From Bustle — Sign Up For The Newsletter